Perfect time, then, for me to put up a piece on Spaceshipped, which is another Button Shy game, a cheap game, a game that jams on 18 cards, that’s a solo game, and, it’s available for $10 from Button Shy, and $3 at PNP Arcade. I know it’s a bit weird to lead like that? But it feels like I should get all that basic stuff out of the way first, because, as with Sprawlopolis and Tussie Mussie and Handsome before them, I just freaking love Button Shy games and there’s a sort of inherently dull status to being so consistently excellent. The article follows a pattern, a sort of sloughed out, well damnit it’s amazing and what am I going to do around that? 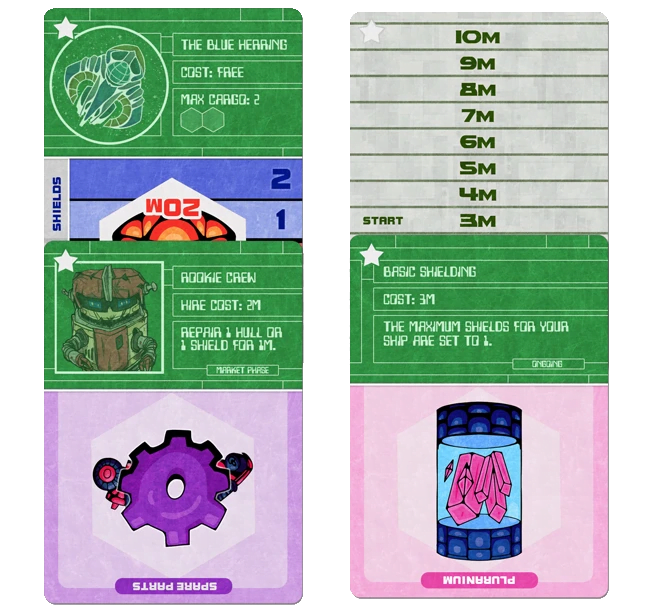 What Space Shipped is is a space trader game. In eighteen cards. And if you’re like me, and a game designer, you might have an immediate moment of hang on, wait, what? It’s eighteen cards, print and playable, no specialised equipment or dice, and there’s a full space trader game about travelling from planet to planet trying to buy goods low, sell them high and deal with the random events that make that particular kind of job hard. Your aim is to buy two Xeno Crystals, rare and expensive properties, before space pirates steal two, and lose you the contract to acquire the crystals. So far so boilerplate.

This kind of game is something I’ve tried to capture on cards in the past because I like these games and space ships are cool and all, but it’s often very difficult to emulate a market and space – like, an actual movable zone where you transition from point to point, not outerspace specifically – when you have limited resources like card design. Videogames handle this really well because if there’s one thing videogames can generate really easily, it’s spreadsheets and vast distance between doing your accountancy homework. My go-to work for this kind of game is always Lavamind’s Gazillionaire, a game that I wouldn’t go so far as to describe as good but definitely a game that was influential, in that it influenced me, with its ugly Windows 3.1 ass interface and resolute, unfailing, absolute demand that we continue doing things exactly the same way, forever, and ever, which is why even though that game is on Steam right now, despite being thirty years old, it’s still expecting you to pay like, forty bucks.

Anyway, what happens in this genre of game is you load up your pockets with stuff you can afford to buy, go somewhere you think you can sell it for a profit, and something along the way either gives you a candy or kicks you in the teeth. The gameplay loop of buy low sell high is mastered pretty quickly especially in games where you can learn things like supply and demand in other neighbouring places, but you play them because there’s this pachinko-ass effect where if you were just making sensible economic deicions, you’d be fine but the game mixes that up by periodically punching you in the face.

Spaceshipped doesn’t have a great sense of space to it, but it does do a great job of jamming that same feeling where you load your ship up anticipating the demand for your supply next turn, or two turns later, and then hope like hell it’s not going to go terribly for you on the way. The way it does this is through the kind of card face design that makes me disgustedly happy. 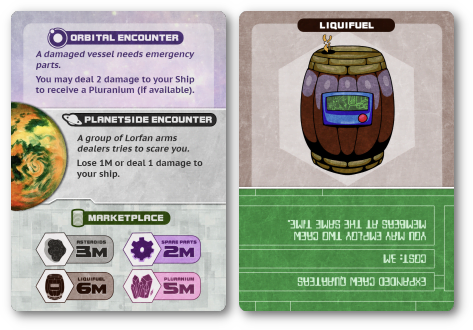 A single card in Spaceshipped is used in three different zones. You’re looking here at one card, both sides. The first face, with the encounters and market on it, is one of three cards that represent the travel from market to market. Each card shows you what happens when you arrive in the orbit, then on the planet, then the market – but crucially, the three cards together show this combined. That is, you get the orbital effect of card 1, the planetary of card 2, and then the marketplace of card 3 is what you have to care about. This means you can anticipate some things going to happen in your future, and you can compare the marketplaces of your current card and future cards. But sometimes orbital encounters will transform the effect of the planet encounter.

What you then get to do is make purchasing decisions based on what’s available in the market, what prices you can get them for, what future prices you can get for those goods, and upgrades and all that. You don’t have a sense of freedom – not really – you don’t get to pick the planet you go to, so the part of the space-faring trader fantasy the game exchanges is a the freedom of going where you want to try what you want. Instead, you’re given a sort of ghost train experience, where you ride in the cart as the game flings things at you, and that’s okay.

I mean you’re fitting a space trader wallet game on something that fits in your pocket and costs a tenner. It’s easily more playable while you wait for things than Solitaire, and I’ve talked about how that game is pretty good, too.

If you want to check out the rules and play through, here’s a helpful video they shared on the PNParcade page for it:

I think one of the most damning things about my mind as a developer is that my reaction to playing with Spaceshipped was realising how much I wanted to use the card face template for something else. It’s not like the game is perfect; there are some wrinkles about it I wish were a bit better. I rarely ever bother buying upgrades or ships – I just find myself too financially desperate for that. The upgrades and ship changes are too visually indistinct to stick in the memory, and the fact the game is more like a ghost train than an explorer makes it feel like the game narrative could use a little more room to flex in the rules (but how are you going to do that!?).

Still, once again, this game’s excellent, you can have it for cheap and it’s good enough that as with many Button Shy games, I’m kind of mad I didn’t think of how to do something like this myself.