I’ve recently taken a habit of going back and re-exploring things from that twilight period of my learning that I could be a person, that I was going to have to shape a life in the wake of the not-apocalypse, and that’s been a mixed bag. Some things hold up – like Homestar Runner, and even some of Seanbaby’s stuff. Some stuff, however… 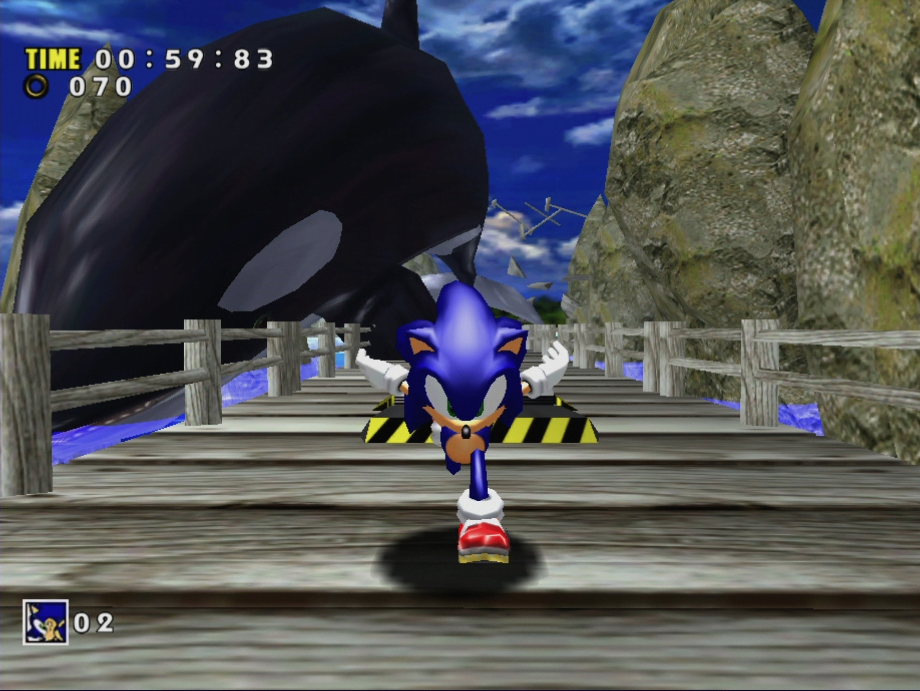 I played Sonic Adventure on the Dreamcast when it was new – not mine, someone else’s, something that she’d worked hard to get and done her best to earn and then played to death. It was a game that wowed us at the time with what it could do, and I never really put my finger on the feeling that I kept dealing with.

I wasn’t good at self-analysis as a kid. I didn’t know what my own feelings were, and I didn’t know that being angry all the time, all the time, was not normal. I knew however, that Sonic was a videogame, and being good at the same was important and worth doing, and it was a way I could enjoy the time with this person I really liked.

What I didn’t realise at the time, and what wasn’t brought to my attention until just this year when I replayed Sonic Adventure DX is what that feeling had been. That thing that made me talk more to her while we played, the thing that made me so interested in making up silly voices for Sonic, that made me want to try and find maps for this game in books or something.

It’s not to say that Sonic Adventure DX is boring. It’s a pretty okay game. What it is is frustrating, and when you hit the wall of your own skill, or find the camera frustrating you, or when you can’t work out the next step of conveyance, the natural followup feeling is boredom. I have gotten better as I grew older at recognising this feeling and bailing on games that leave me there, but Sonic Adventure DX is a little bit different.

When you go back to old games, you are going with the full understanding that you’re leaving behind a lot of modern convenience. Autosaves, for example, or in more extreme cases, saving at all. There is always a curve to grade on. Normally, when I look back on old games nowadays, I do so thinking about mechanics and the choices to design them, or thinking about the things that make the game fail. I think about budgets and limitations and I think about how these games are made, crafted objects. I think about the people.

It’s hard to be anything but incredibly sad and sympathetic towards Sonic games. 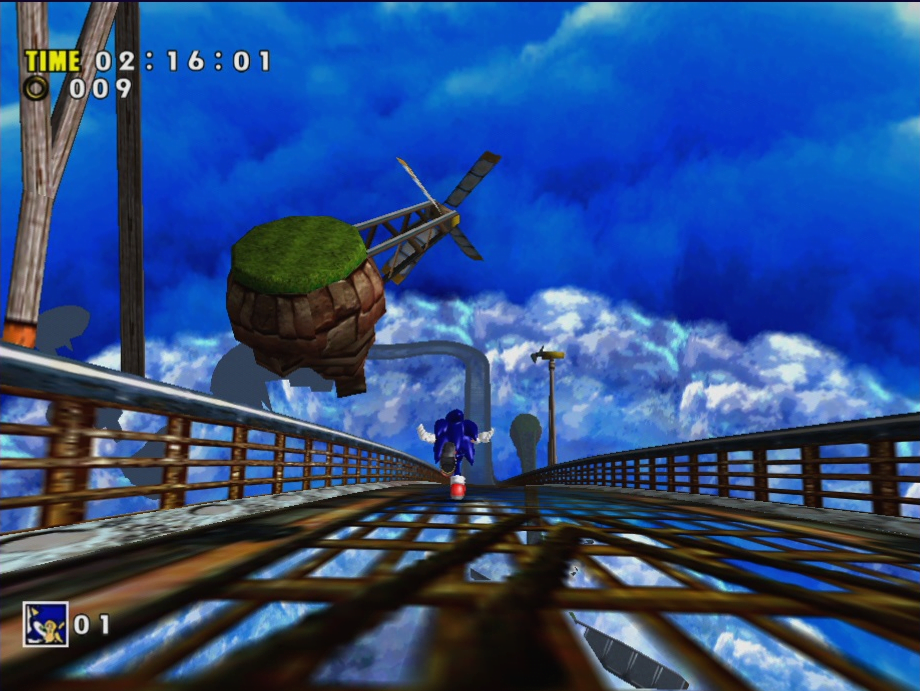 Sonic Adventure was an attempt to be a big, bold, forward step for the Sonic games, to bring Sonic’s perceived speed into the focus of the new, glitzy hardware on the new, impressive system. It wasn’t the first 3d Sonic outing, but this was meant to be a Big Deal of a Sonic Outing. It’s kinda funny, actually, when you look at what happened to Sonic – in a lot of ways he went through the process Gamer Culture keeps crying for other game franchises to go through because they don’t know what they want.

Yes, I am comfortable saying that.

There’s a regular push that games need an open world, that games need to get bigger and wider and vaster. There’s this perceived end point of games that they should all feel like what we think a AAA game is – that if we go back to games like Star Control or games like Fallout they need to come back as fully realised 3d beasts with a host of subsystems and ideas to make them into one big thing. That thing tends to be the same thing.

And in Sonic’s case, even if it was a good idea to do this (it wasn’t, it isn’t) it was done so poorly in Sonic Adventure that I can’t help but imagine a group of level designers, programmers, and engine coders sitting around in a meeting quietly hoping nobody asks them to be honest about how they’re feeling. Because everything in this game that’s bad feels like it was the almost-good-enough product of someone who wasn’t confident they could pull off what they were trying.

What do you make then of a game like Sonic Adventure where people didn’t really know how to implement Sonic’s speed well in 3D? Is that extrinsic? They didn’t have any examples to work from that succeeded. They didn’t have good camera software, or good controller software – are those extrinsic, or should they be expected to know about how to make those things. 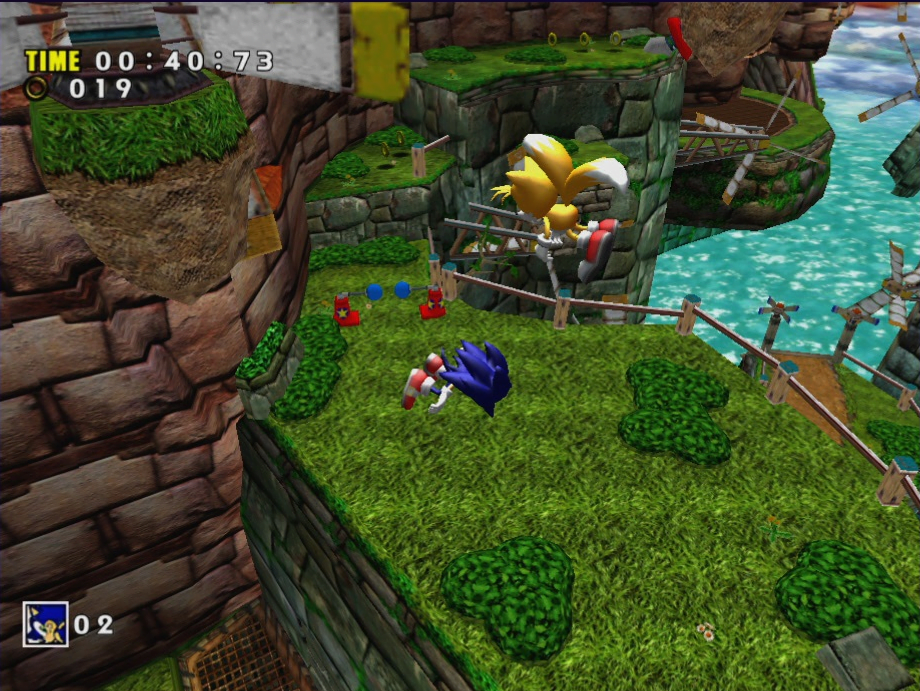 One of the things that last to me with Sonic Adventure DX is that, in addition to being kinda boring and frustrating, is the moments when the camera leaps away from you or sweeps around or changes perspective so that it can treat you, the viewer, to spectacle. It wants to give you an amazing, hand-crafted experience, with a sudden flashy moment, a delightful showing that the game wants you to see this cool thing. It’s not like you can build the level and just let that happen organically – you had to set up triggers and cameras and make sure the game can recognise whether or not you’ll see it right, and there was work there. There was a lot of work there. These moments also fail spectacularly thanks to the oddball controls, by the way – you veer off the track by a heartbeat breadth and the whole thing just gives up, the camera sulks back into place and you’re left trying to re-gather momentum.

And then, on top of that, you have this, the Director’s Cut. A chance to go back, right? To fix the camera, to fix the levels, to add modern convenience, to make it work. How many people get a second chance like that on a big project? How do you undo what you did? How well can you undo it?

And the camera is still bad.