Simon the Sorcerer is a Narrative Adventure game made by Adventure Soft in 1993, and it’s weird. It’s weird in the way that a lot of British-made games were weird, weird in the way that British pop of the era was weird, weird because it was simultaneously very much its own thing made by people who were very confident you knew what they were talking about like a swaggering cultural coloniser but at the same time strangely desperate to follow a leader it definitely didn’t quite get.

Now, I’ve talked about Simon the Sorcerer in the past, and I want to set aside the sequels (there were five of these things?!) because they became their own thing as well, their own slightly worse thing. Instead, I want to focus on the first game, when Simon is something of a generically quippy British arse, maybe as young as twelve years old voiced by Chris Barrie, as opposed to the character who was desperately trying to crawl into Chris Barrie’s voice and take on some of his power. 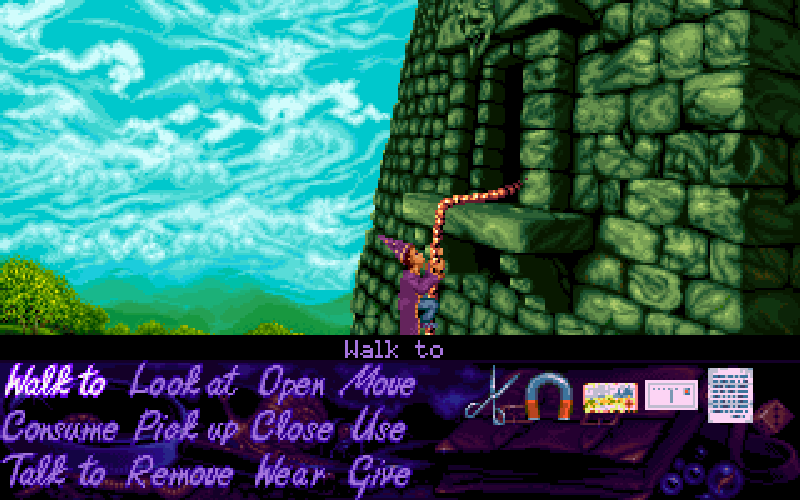 If you look at this game, you’re seeing the same basic game as a Monkey Island style game; three years after Monkey Island and very much built on the same fundamental building blocks, this is a game where you play a bit of a nobody who’s much like You, The Player, in a world with ridiculous people in a colourful, funny setting.

You play Simon, a boy from our world, who falls through a magical book and arrives in a new world, is decreed a powerful sorcerer, and are sent off on a quest to defeat the dread lord Sordid and rescue your puppy. This is a very basic, standard 90s videogame Narrative Adventure plot, with a lot of the same hallmarks. The protagonist is an everyboy targeted at the kind of person the programmers thought was relatable, he had a generally obviously positive goal, and he was released into a world full of seemingly mundane random crap that you have to rub against one another in an attempt to progress on to the next point.

It’s definitely one of those Narrative Adventures, the kind where the whole game can be played very easily and fluidly in one long, single flowing thread of logic and there really is no point playing it in any other way, and the game doesn’t do a great job of providing you many loose ends to find your beginning on that long ribbon of logic, a series of keys and doors and keys and doors, because failing to find those keys and failing to identify the right doors is meant to yield comedy, and therefore fun.

It’s a game with a Sierra game’s vision of play with a Lucasarts game’s comparative toothlessness, and the measure of how much fun you have hanging around with it is going to be based on whether or not you find it funny. 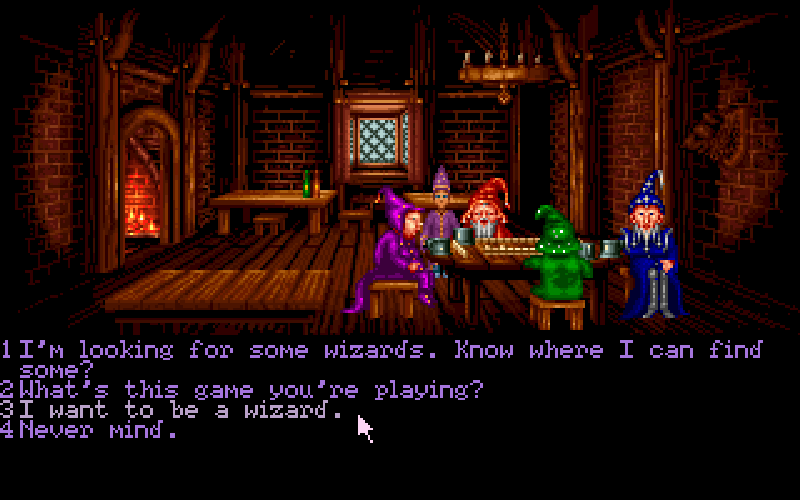 Aaaand it’s not that funny.

I mean it’s funny, but so many of the jokes in Simon the Sorcerer are the kind of joke that’s been run into the ground in the intervening twenty-five years. When this game came out, I was a child – like, seriously, I’m not that old – and the game’s release was around the time in history where jokes about Lord of the Rings and Monty Python were already over-done and already so run into the ground that ‘he quotes Monty Python all the time’ was already a signal of a boring nerd.

The game does have the relatively new area of being witty about its own interface, which was again, relatively new, except Monkey Island made a lot of the same jokes. Then Discworld came along later and made the same kind of jokes but did them much better and in a deep well of other funny stuff, and really, Discworld, which came out two years later kinda kicked this whole game’s whole purpose into the bin.

That’s not all that’s made it hard to replay, of course: These screenshots are blown-up old screenshots from an abandonware copy of the game. GoG and the Android store sell a 25th anniversary version of the game that doesn’t look very nice, all the iconography and visuals smeared through an oilify filter to ‘fix’ the jagged pixel art of the time. Now, I don’t recommend you pirate this game but I also don’t recommend you buy it, because it’s not actually that good.

Still, I had to have some reason to bring up this game, in Magic Month, and well, the game’s about being a mage, right? But it’s about being a wizard, and this month isn’t about wizard magic, it’s about the magic that people can actually do.

It’s not good, it’s not remarkable, and it’s not funny, so why do I bring it up? 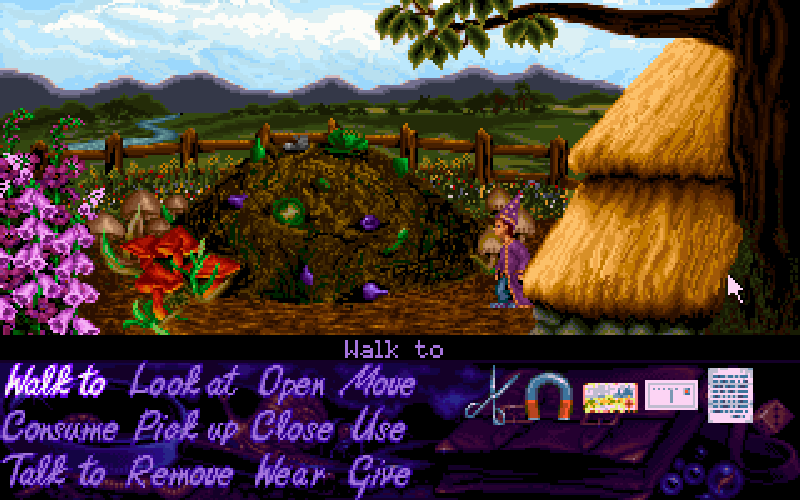 Here’s the thing: Simon the Sorcerer, much like all sorts of games of its genre, is against the normal rules of the Narrative Adventure genre because this game world expects you to be able to do magic, and you can’t. The problems Simon is facing are problems that an actual wizard could probably solve pretty simply.

Instead, Simon has to do things that look like magic. He has to lean on the interface, on rudimentary high school science, he has to do actual sleight of hands, generating things that may look like magic but aren’t magic, or things that may fulfill the letter of the rules for magical spells and effects but crucially aren’t done with magical effects. It’s a game all about wiggling around the rules of what magic ‘should’ do to get close enough with the things you can do.

In essence, Simon the Sorcerer is a game about how doing magic is so hard it’s easier to do bullshit.

And that’s why I couldn’t stop thinking about it, as I thought about games about magic.

Don’t play Simon the Sorcerer. Play Hand of Fate instead, it’s much funnier and its protagonist kicks ass, and she actually does magic.