There are two stories about Raven Software.

For those of you not familiar, Raven Software were-slash-are a Wisconsin-based videogame development company founded in 1990. They were responsible, most famously to nerds like me, for the games Heretic, Hexen, and Hexen 2, a set of first-person fantasy shooters that used id game engines to tell you the story of multiple fantasy realms being assaulted by dreadful Serpent Riders.

This is not a wrong story.

It is an incomplete story.

See, Raven Software were not a surrogate organ of id Software. They were their own company, and they had their own ideology and ideas they tried to make work, and they had business successes and business failures. They made deals and trades and grew and changed and signed contracts and were, eventually, sold to Activision (which is a kind of death).

Part of that story lies here, in Shadowcaster, a Wolfenstein-3D engine action RPG, released in September 1993, three months before the release of Doom. 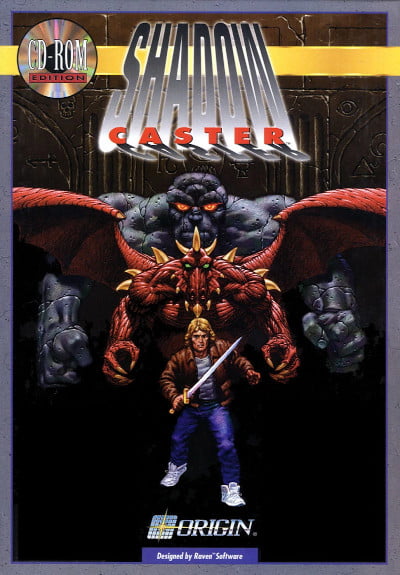 In Shadowcaster, you play Kirt, a young man whose grandfather sits him down and explains that he’s not a human; he’s an extradimensional shape-shifter from another world, hiding in our world to try and protect him from an evil shape-shifter emperor. The gods of this realm looked into the future to find someone who would save them, and couldn’t find anyone – except one lone shapeshifter, who cast a shadow upon the future.

The one who casts a shadow.

Do you get it?

Honestly, by the way game titles worked at this point I’m genuinely impressed they actually made it matter for such a generic name.

Anyway, then a gargoyle reaches through the window, and probably eats your grandfather but you get teleported to your home? and told you have to try and take out the evil emperor. And honestly, I’m okay with that for FPS storytelling. I am here for killing evil emperors, that seems rad.

Your mechanical hook in this game is that you don’t get weapons (well, you do, but they’re not important); instead get to shapeshift between different monstrous forms that you unlock by finding important obelisks around the world. Your forms start out with a four-limbed murder cat, which kind of seems like all you’d need. But you also get to unlock other forms with a variety of different combat abilities, but also special abilities. The murder cat for example, can see invisible things (when you toggle it on), creating mazes out of invisible landmines.

It does fit a solid kind of weapon design, the sort of templating that Doom kind of codified and every game since has been kind of trying to remix. Each monster form brings with it a special ability or two that you need, and some are better or worse versions of others. Flying as an Opsis (basically a Beholder) is slow, but you have a lot of magical spells to spam. Flying as a Ssair is fast, but you only have one spell you can use, really (breathing fire on things). Some levels are designed so you can only navigate them with one or the other of these forms – a Kahpa (frog monster) can move through water, and the Grost (big stone golem) sinks in it, as does the cat. Plus, these are treated as bodies – your perspective in the world shifts up and down depending on the size of the form you’re in, and so does your reach. 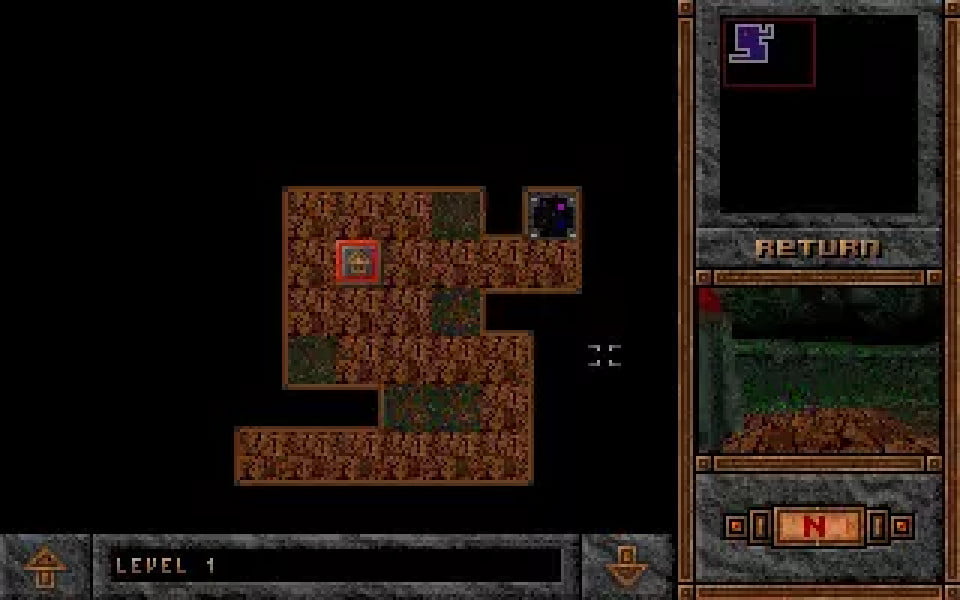 It’s a Wolfenstein style map, where everything is basically laid out on grid paper, with keys and doors and monsters to kill to do things. There’s an inventory system, too, where you pick up items off the floor and put them into slots. The cruel comparison is to remark it’s like System Shock, a revolutionary game made with a different engine that came out – yikes, a single year later? But it’s definitely more of your Ultima Underworld style slow paced first person game.

Now, while I bring up this game, I do not recommend you play Shadowcaster. It is a difficult game to play, with an interface that is both more sensitive and less responsive than you necessarily want. The interface is clunky in a way that might confuse anyone who’s used to the fast-moving sliding and sweeping style of mouse-movement based FPSes. You do play with keyboard and mouse, but it’s an interface that looks arcane to our modern perspective. You move the character around with the arrow keys, and you can strafe, but you can’t turn your head with the mouse (in most modes). This is a little at odds with the game’s focus on melee combat – your character can punch and kick and you’re dropped in your very first moments in a fight with a two legged monstery thing, that you have to fight immediately or die.

There’s a lot of ways about how to do this kind of game that merits a reconsideration with technology we have now. Like I kind of would love to see someone approaching the basics of this game with a modern 3d engine. 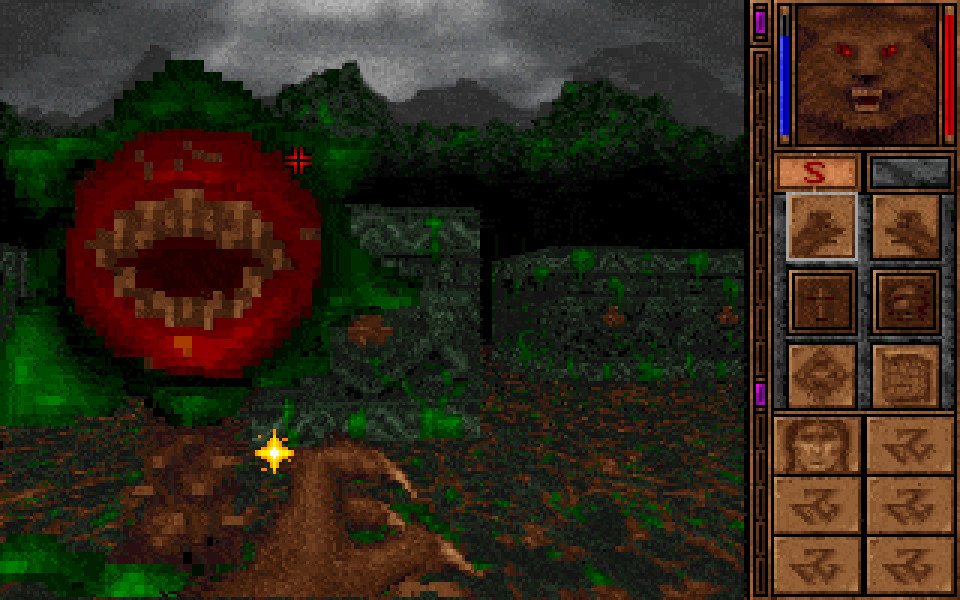 Now how does this relate to that story about Raven?

Because when you look at these games as permutations of id software, you look first at the game id made, then how it was different in Raven’s hands. Doom to Heretic? Well, added an inventory system, tuned some monster health, added flight and puzzles that c ould use it, which adds demands to the interface. Doom 2 to Hexen? Some different level design tools and a slightly larger arsenal, split up into three characters, with the new hub world ideas. Quake to Hexen 2? Well, Quake has a very powerful set of modding tools, and that allows for a lot more extensive tools for building realistic seeming spaces, so more things like windmills and townships and breakable glass.

But what if you look at these games in terms of a thread of continuity of the things Raven were trying to do?

Shadowcaster is a game made on the Wolfenstein engine that had hub worlds and an inventory system, and a world built around the idea of being able to be wildly different people. Heretic made a fast-paced, fluid interface version of the same idea, with inventories and dimension-hopping worlds of mages. Hexen brought back the hub worlds, something that had been in development years ago, and Hexen 2 used those same hub worlds with the realistic settings to explain the path you’re trying to find. The problem was less “What can we do with what id gave us,” and more an evolution of their own development, an expansion of Raven’s ideas.

Raven’s ideas were also really interesting. They were trying to find that balance between a realistic 3d space we’d eventually see Adam Jensen trundle through in games like Deus Ex: Who Cares and Doom’s let’s-say-impressionistic approaches to combat arenas with dangling corpses. There were attempts to make the ‘puzzle’ elements of what they presented you to make some measure of sense – if you needed to grind bones, you had to find a big thing that could grind bones, so you chucked them into a windmill. 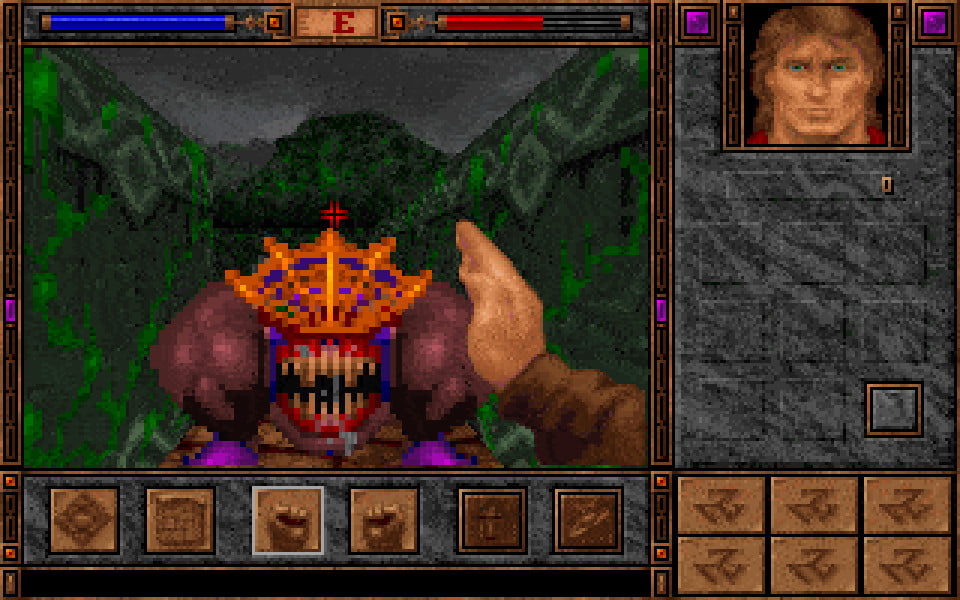 I think I’ll always admire what Raven were. It’s not like they stopped doing good or interesting games as a label, necessarily, even as they’ve changed over time. I will always love the task of finding pieces and making something out of them, the exciting possibility of making things that fit together work together, whether it’s in game mechanics or components or lore and worldbuilding. I find creating within restrictions exciting, and I find the idea that these games seemingly were about Raven trying to do Raven things in id spaces really interesting.

The thing is, it reminds me a lot of modding and fandom spaces. There was a hot minute back in the Quake days, where you could buy Total Conversions for Quake in the store for like, $15-$20. Raven were just better at it (because it was their full time jobs). They had access to the programmers of those engines and were able to make interesting hacks, but still couldn’t make revolutionary changes.

Eventually, when you look at this lineage of games like this, you stop seeing it as ‘the latest id side-game’ and instead, see a studio with an interesting set of ideas, asking the question How do we do the thing we already did, but better?