With Shadow Of The Most Generic Name Ever on the horizon, I decided it was time to return to the first game in this franchise, one of the many 2014 Licensed Games That Was Stunningly Good.

To give you the rundown, Shadow of Mordor plays, well, it kind of plays like an Assassins Creed game from 2014 that wasn’t made by ninnies. It’s a game with a free-roaming world map in which you move in a climb-run-jump style, and that world is filled with flaggable things that you can interface with and some of those things advance the plot.

What I’d say about Shadow of Mordor in the simplest way is that it’s the first game I played as an adult that evoked pure-text roguelikes in terms of sheer complexity of world interactions. Even though I knew the game wasn’t really doing anything so complicated, there was still that feeling of discovery as I poked around – wondering if things interacted in ways I wanted them to when I tried them. Could I kick over that? Run behind that? Would enemies notice over short barriers as they got closer to them? Would kicking an enemy off a barrier land on someone? I was regularly surprised by the number of times I found something someone cared about enough to code. 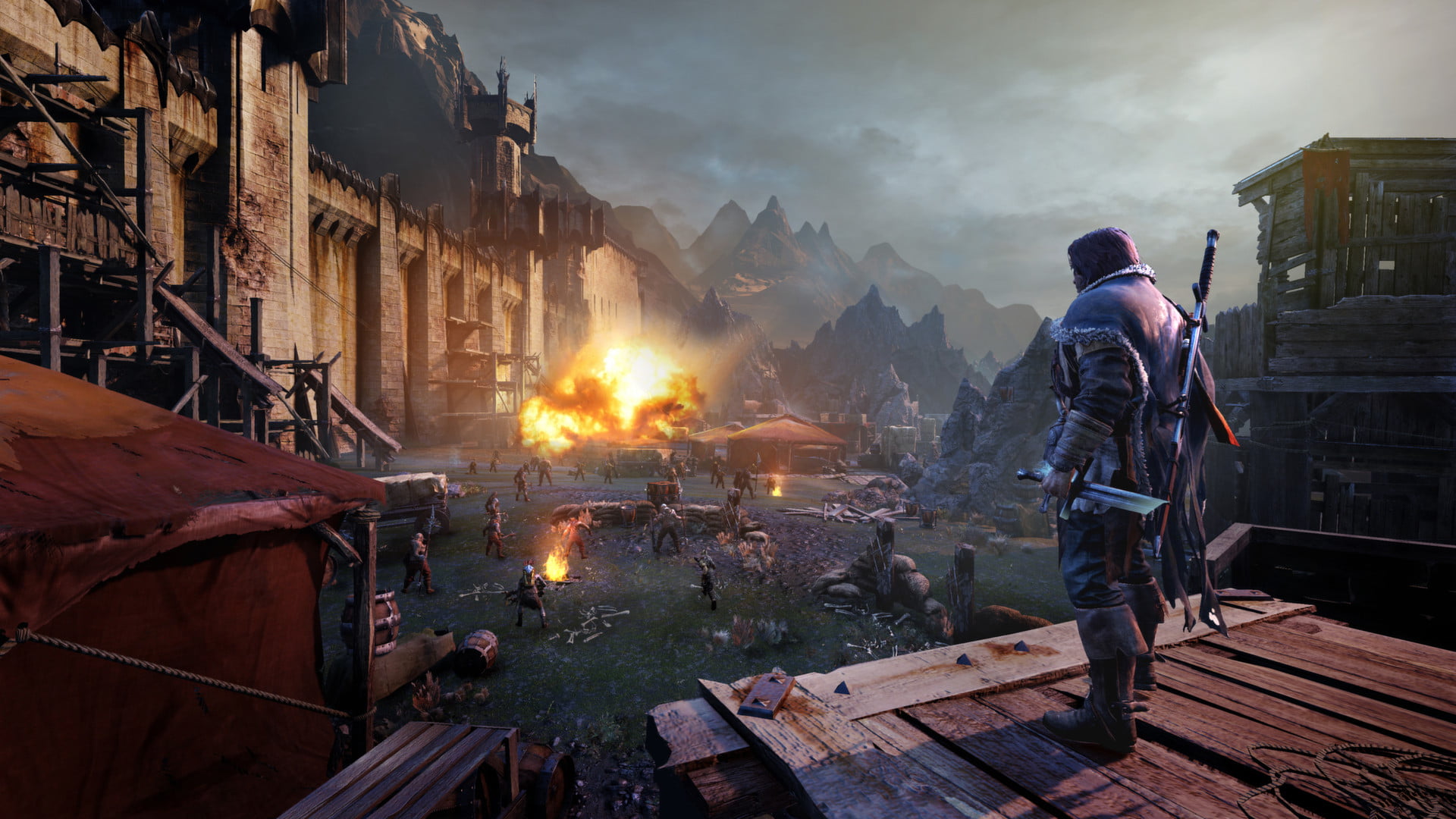 Shadow of Mordor is a real testament to the scope of emergent play being fed through a large, elaborate asset system. I can’t tell you anything about the plot of the game at large, because it’s trying to be a Lord of the Rings story coupled with a really boring Jojo’s Bizarre Adventure story, mashing together a thing I don’t care about with a thing that doesn’t fit it at all. Still, the first mission I remember sent me to go meet Gollum.

Instead, I went and murdered orcs for two hours. 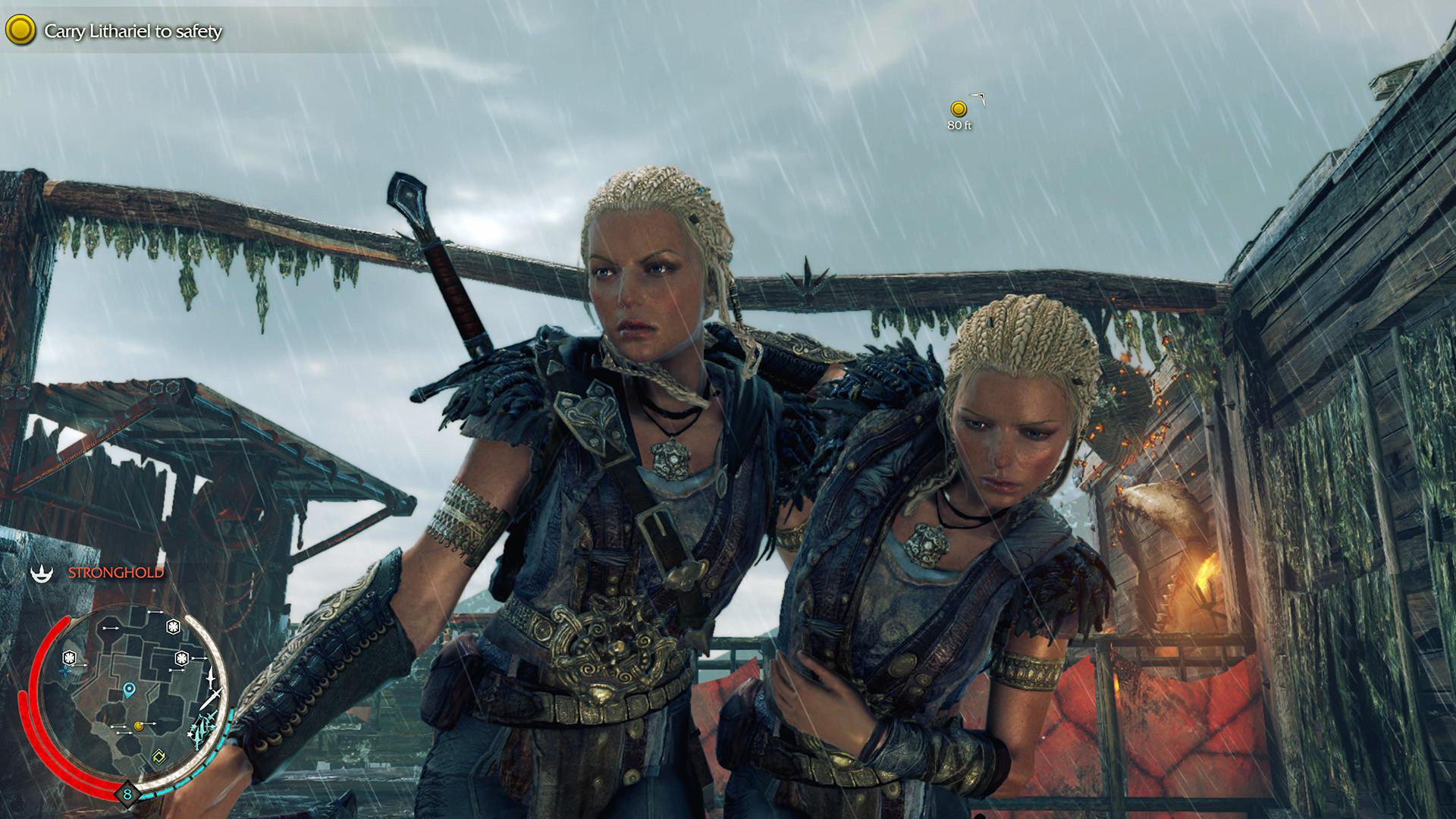 The starting package in this game is so full of nice feeling interactions and playful murder toys I spent much of my time in this game’s space leaping around, stabbing and running and jumping and experimenting with stealth and killing giant piles of orcs then stopping as I was discovered in my giant pile of dead orcs and realising I had to start killing again and it was time to kill another giant pile of dead orcs. Then the game told me nearby, a friend had been slain, and I was full of vengeance, lunging outwards, heading towards the cliff, diving off and down and justice for whoever-it-wassss!

One of the things about this game that really made it work was the option to play as Lithariel, as depicted above: You’re replacing your stocky Talion (I think that’s his name) with her, who I only know because the screenshot mentions her by name. The braided warrior princess uses all his animations, which means she fights like a gory grappler, reminding me more of the inestimable Evie Frye, Murder Princess.

I’ve told the story before – basically, discourse about another game brought up that I was talking about how I liked Shadow of Mordor and those two points were held in contrast: How could I enjoy Shadow of Mordor and not this other much better game? As if by magic, though, this connection made me sit back and reconsider why I was playing Shadow of Mordor, worry about what it said about me… and stop.

I’m not here to belabour that story; rather, though. I want to address the truly fascinating thing to me about this is that that was all it took. 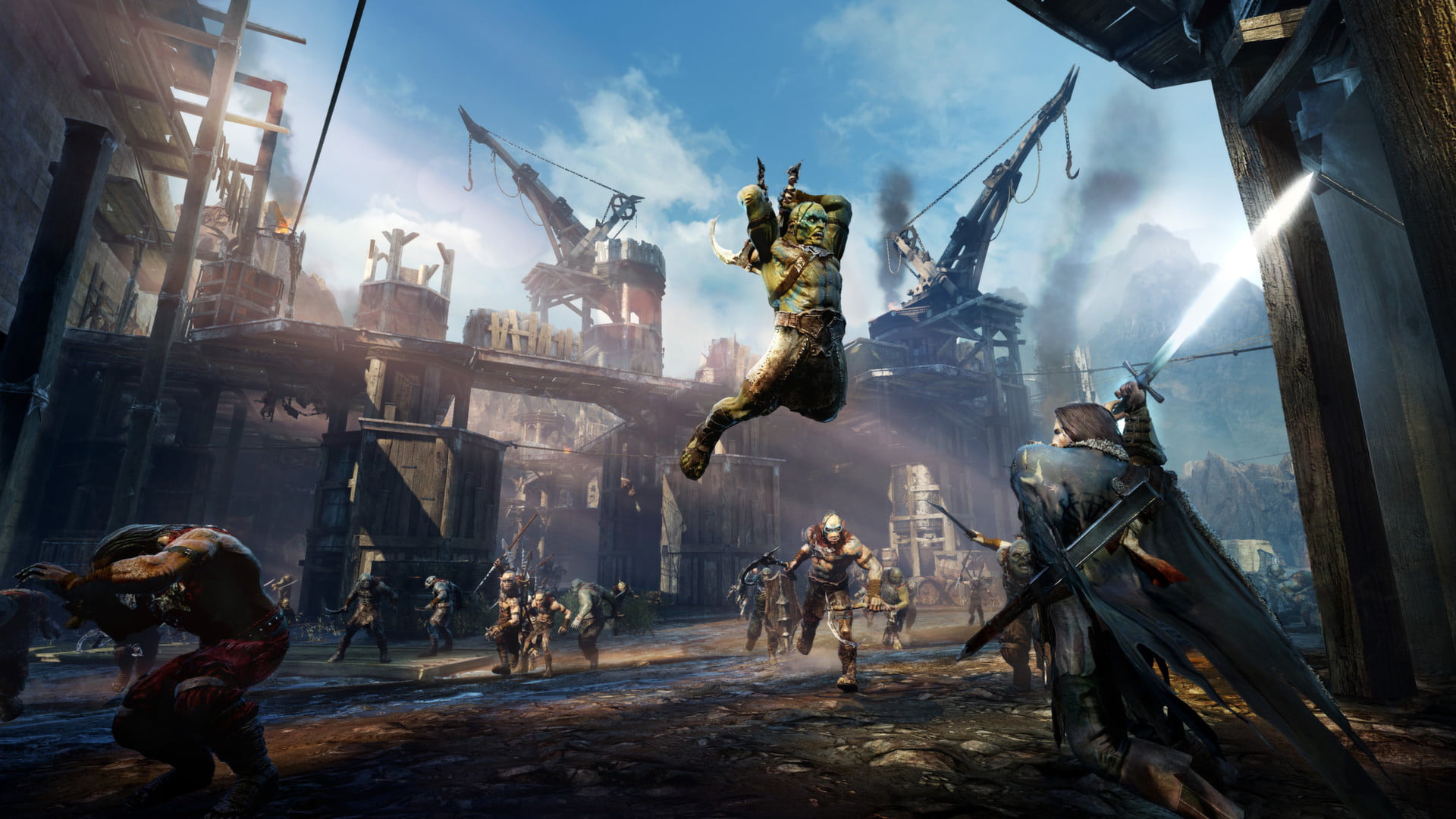 There’s this idea of conveyance in videogames. Well, in games in general – it’s a term we’ve been using for some time and you may know it now as Play Conditioning because a youtuber said it and not an academic and who bothers to read any more. The basic idea is that games, through play, can induce you to play them more, to encourage you to keep going. Conveyance is part of the invisible ink of game design and storytelling, something that used well teaches you how to play with a game’s experiences, how a game wants to play, and in some cases, how players can be made to feel they’re confronting something hard even as they’re doing exactly what the game is trying to make them do.

Shadow of Mordor has a really excellent conveyance for keeping you moving around and interacting with the world in a really surface way. When you fight an orc, it has stuff, or you can recruit it – or fighting it pulled you into a path of a patrol and now you have to move out of the way or find a route out of the combat arena you’re in. When you round a corner or move over a hill you’re seeing new things that you want to move towards – and this means that even a simple journey to follow the plot’s main story beats will still pull you in different directions along the way in an attempt to keep you engaging with the world, keep you focused on existing in this space. Every single thing wants to push you towards the next thing, and then the journey on the way is still populated with more things to do, things you need to sort out to continue onto whatever it was you’re wanting to do. 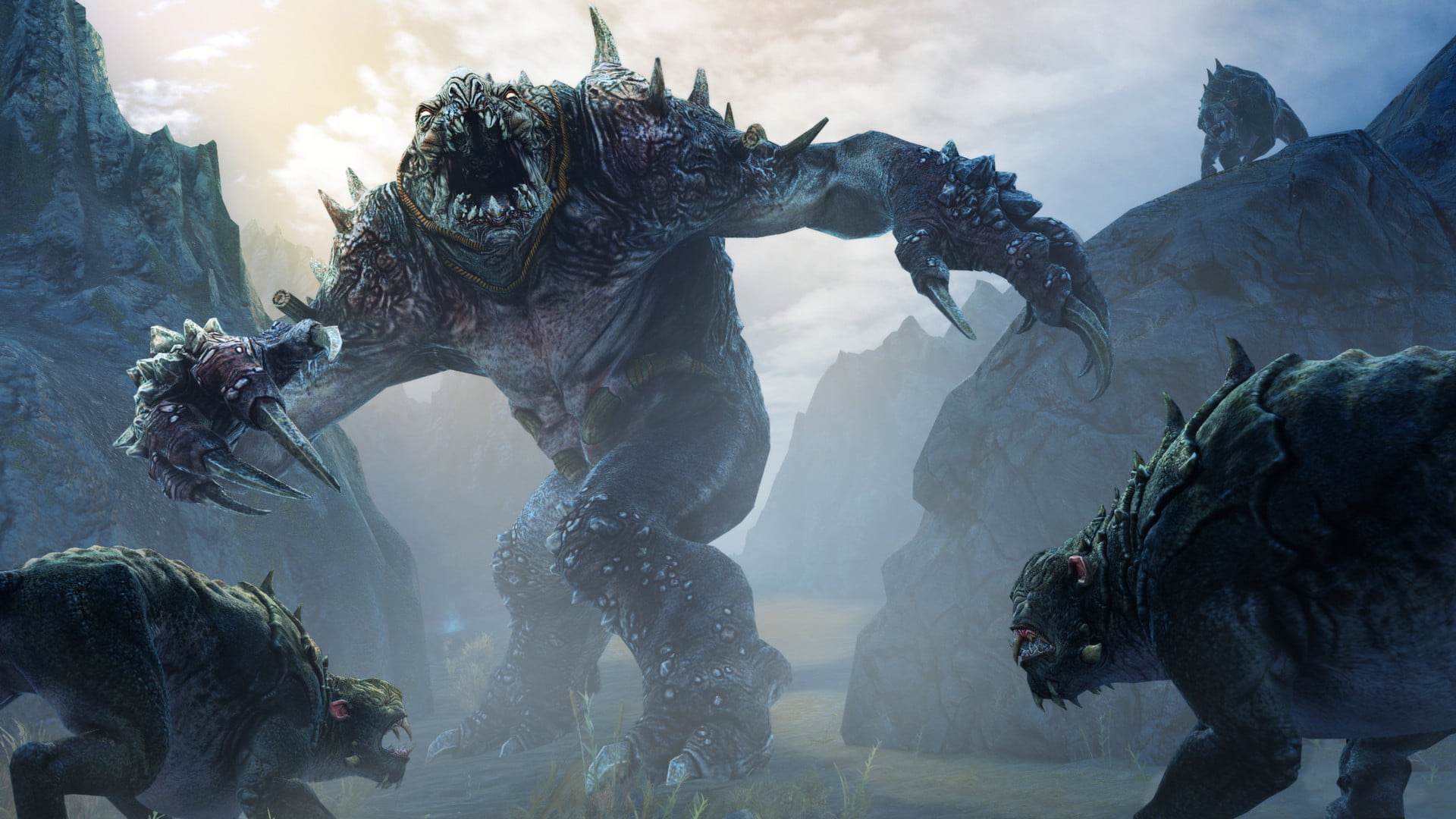 Because here’s the thing about Shadow of Mordor. For all the depth of its emergent systems, for all the size of its world and the history of its lore, the actual engagement with the game, the things that keep me in it are shallow. Entirely surface – an experience akin to a much slower, much less rhapsodic Hotline Miami, and when the play experience fails, it takes a lot of time to return to it.

This conveyance works fine if you’re in the game, if you’re part of the play experience in a deeper way, if you give a poop about the plot. Do you think that there’s something genuinely interesting to learn in Calabashbroohahaha’s story of intense rage? Do you care about fighting this component of the greater war knowing that it’s all going to be resolved later by the actions of Aragorn and Frodo? Do you want to be in the world of Tolkein…?

Because I didn’t, and the game did literally nothing to make me want to. It kept me doing things that didn’t matter, and they kept me engaged, but that engagement was so shallow that the second I felt any resistance… poof. Illusion ended.

I uninstalled Shadow of Mordor last week after over a year on my hard drive completely unplayed. It never once felt the compulsion to try it. I played Dishonored 2 in its entirety over ten times and not once touched Shadow of Mordor.

You can get Shadow of Mordor on Steam and the Humble store.