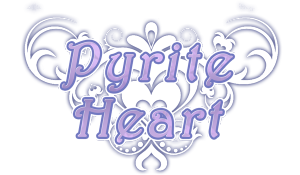 Do you wanna be a princess?

Do you wanna smooch some boys?

Pyrite Heart is a fairly simple little game. There are five decisions in it in total, and you can rip through the whole game in maybe two hours on your first play-through, maybe less if you don’t take your time to screenshot it a lot like some sort of dork. In that story, you meet Ahri Remono, a brilliant young princess who lives in her own fortress estate in the middle of a city and never interacts with people outside that bubble because of pretty legitimate fears about vulnerability that presents to her family. One day, possessed of a competitive urge with her brother, Ahri decides to go to a Normal School and do a Normal Schoolwork.

There, she meets with a hunky boy she sees as her rival, and another hunky boy who is her servant from the palace. Along the way, you make four or five choices as you try to select the path that will let you smooch the boy of your choice. Assuming you don’t get an FAQ for it (there are five choices), you’ll probably work it out in about four or five playthroughs and see the four endings. The game even allows you to scroll back and forth, and reverse decisions – which can be, I assume, handy, to see how you feel about things.

It isn’t a very complex game, but it is pretty, and it’s very thoroughly put together. The backgrounds are lovely, the character art is consistent and high-quality, and the music fits the scenes. The whole thing is… well, it’s a nice little game and it’s clearly indicative of a lot of effort.

The game itself? Well, I liked it. I liked it, in spite of what I was expecting. The high quality art isn’t done lazily – characters’ expressions change while looking consistent. There’s some low-frame animation too, which all make it feel more polished than let’s politely say ‘a typical RenPy offering.’ More than that, though, I really liked Ahri. I wanted her to wind up with a boy who woud make her happy, which is why I’ve played through the game multiple times now. I wanted to be sure – in that hypertextual way – that the dudes she was possibly going to smooch weren’t secretly massive assholes, hiding their bad behaviour on Some Other Route.

It was a pleasant surprise.

Particularly, it was a pleasant surprise because this story form is one with a lot of baggage.

Chances are you don’t necessarily know the plot structure for this sort of anime-homage narrative, in which case, congratulations for making better life choices than I have. Pyrite Heart is very much is a game that uses a stock plot structure and semi-stock characters to tell a familiar story. That story is…

When you see the machinery of storytelling enough they can be seen as having momentum. You see the open manhole and the man walking with the newspaper and you know how these things are going to come together. It’s just a matter of time, right? Well, the type of narrative Pyrite Heart uses is um, a little…

You know The Taming of the Shrew? That really nasty Shakespearean play which is basically about taking an uppity woman and humiliating her repeatedly until such time as she accepts her proper place in order to avoid more humiliation?

The narrative form of Pyrite Heart is what we can politely call classic and cruelly call a cliche. The protagonist is a very special, very skilled young woman, often sometimes quite arrogant and naive, and she is then dropped into a situation that most normal human beings navigate just fine. Faced with her own incompetence and the shattering of her illusions about herself, she bursts into tears and is rescued from that situation by a hunky boy of her choice. Then he throws his fedora in the air and you run off to be his waifu, or whatever. It’s a stock set of tropes and it can be pretty damn gross.

Thankfully, Pyrite Heart, while using this structure, pulls back from the grosser things with the simple decision of making Ahri competent at things. Yes, she can’t cook, which sucks, but she’s good at all the other things she tries to do – her failing is being not perfect compared to Ryuu, who is… well, pretty unreasonably amazing at things.

The story frames it as a rivalry between the two. It’s not framed as an inevitability, or that Ahri is foolish for her perspective, and Ryuu is much more patient and less condescending than the story tropes expect. This isn’t without touching on the Kenta path, which is about empathising closely with someone with a pre-existing power structure.

In both cases, Ahri is framed as being wrong about something – but not about everything. Where her failing is a lack of awareness of her surroundings, she’s still shown as working hard, learning from mistakes, growing as a person, and also having a basic quantity of competence that she wants to have. There’s no ‘I will be perfect to make Dad proud of me-‘ line. Ahri just wants to be the best, and she tries for it. The stress gets to her at times, there are some things she does imperfectly, but given that I was expecting this story to humiliate her, I was pleasantly surprised that it didn’t.

You can buy Pyrite Heart on Steam for a very reasonable $5.