I got this game from a Ding-And-Dent at Cancon2020, with an initial idea that it would make a good pickup for my mum, who’d enjoy it, because it was about detectives and cats, and you know, so on. Then when I got it home, I considered that I needed to make sure it was a good gift for her (since, you know, when does my mum get to play games like this), and if it was kid-valid, so I decided instead of making a gift of it, I’d play it with the family a bit, and see what she thought before handing it over, rather than just impose it on her and assume everything would be fine.

Then we played it.

And we played it again because the first thing someone said after we finished it was let’s play again.

And anyway now I’m keeping it. 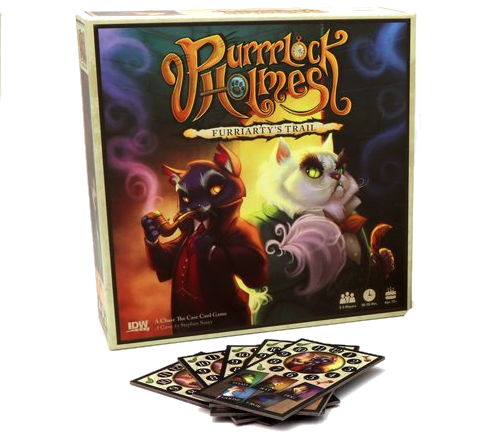 The core mechanic of this game is a hidden information extrapolation game. I have a suspect that you can see, you have a suspect I can see, and you can ask me questions about the suspect by showing me cards. You want to deduce the gang affiliation of your suspect or the time when they did their dastardly crime or both, and every crime solved gets you one step closer to the mastermind cat who’s been orchestrating all the crimes, the dreadful Furriarty. When you catch up with Furriarty, you can flip over all the collected tokens and if you want, determine who ‘won.’

The cards you’re using to make these guesses are sort-of-drafted, where there’s a starting hand of four cards, and every player has two; you’ll use two of those cards, and hand the rest on to the next player, then draw another two once that has left your hand. This means that while you can’t communicate to other players, necessarily, and you can’t make their life harder per se, what you’re going to hand over becomes one of your determining factor, especially if the hand is bad. 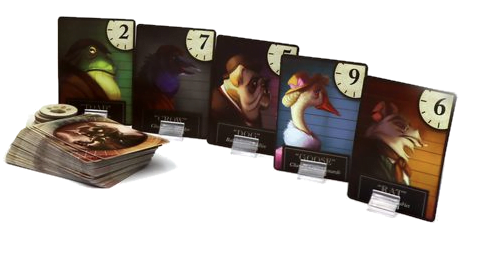 It’s an example of a semi-cooperative game where the scoring system does mean you want to do better than others, but if you mess with other players by giving them bad cards too much, you’re going to wind up giving Furriarty the chance to escape. It’s an example of a game where it’s possible for you to fall apart if you don’t stick together, which does mean the competitive element of the game is slightly at odds with the rest of it. That’s okay by me, though, because we don’t tend to care about who ‘won.’ If you want a game with a competitive bite, this isn’t it.

The game has this wonderful tightening of the net, as more and more cards get revealed, but then there comes a turning point as the game goes long when the deck runs out of card, and the discard pile suddenly gets flushed back into the deck, and you’re suddenly completely unsure of who has or hasn’t already been bothered, who can’t possibly be an option. This gives the game a multi-stage feeling, of clueless helplessness at the beginning, a feeling of vicious competence, then either tension as you try to either prevent the reshuffle, or try to scrabble after Furriarty with much less information.

One final thing is that if you do get this game, markers or tokens to put on your player board might make your life easier.

So yeah, this is a game I liked so much, I stole it from my mum.