Prey is an immersive sim game, an Arkane game of that mould that echoes System Shock and Dishonored. They’re first-person not-shooters, games that we’ve had a hard time giving a genre name to in these past few whens. Back when they were new they were another type of RPG, in the vein of Ultima Underworld, but as engines improved and the games moved with them, they’ve existed in the shadowy space alongside your more combat-oriented first-person shooters. This legacy, which Campster has covered over on his channel, has its latest incarnation here in Prey.

Prey’s a triple-A game made with a Bethesda budget and Arkane ambition, which in a legacy that includes Dishonored 2 means you wind up with some games that are impressive in what they’re tryin and don’t quite manage to pull off everything. Famously, they’re a Bit Buggy. I expected Prey to be buggy, given that it seemed to want to do things like size-changing objects and boundaries and an enormous collection of flags obtained in 3d spaces and attempts to track things like what you’ve paid attention to for long enough.

Here’s the good news, though: I not once ran into anything that felt like a bug. There was one point where an enemy glitched into a wall and waited for me to beat it to death, but the game itself seemed to work just fine. So, mark in its favour: The game is robust and it works.

Other stuff about the game that deserves mentioning in a positive way is that there’s a lot of stuff. When you make an immersive sim, more than FPSes, you are kind of beholden to make it so the game feels as though there’s a lot of different things you can try, whether it’s Dishonored’s needlessly deep combat system or System Shock’s largely unnecessary hacking system. Pick how I played those games. Point is, in Prey there’s a lot of different ways to play – the usual gunny-sneaky-hacky trio, there’s incentives to explore everything and also hazards that maybe push you towards keeping yourself safe. There are ways to ‘break sequence’ with the games’ tools including the GLOO gun and…

Yeah, there’s just a lot of stuff. Some you’ll like and you’ll focus on and some you won’t. Try out what you like. Ala Dark Souls the game is not designed to be so hard you need to know everything.

The game even gives you upgrade paths and let you play around with the weirdo abilities of the enemies. I wouldn’t know, I didn’t touch them. 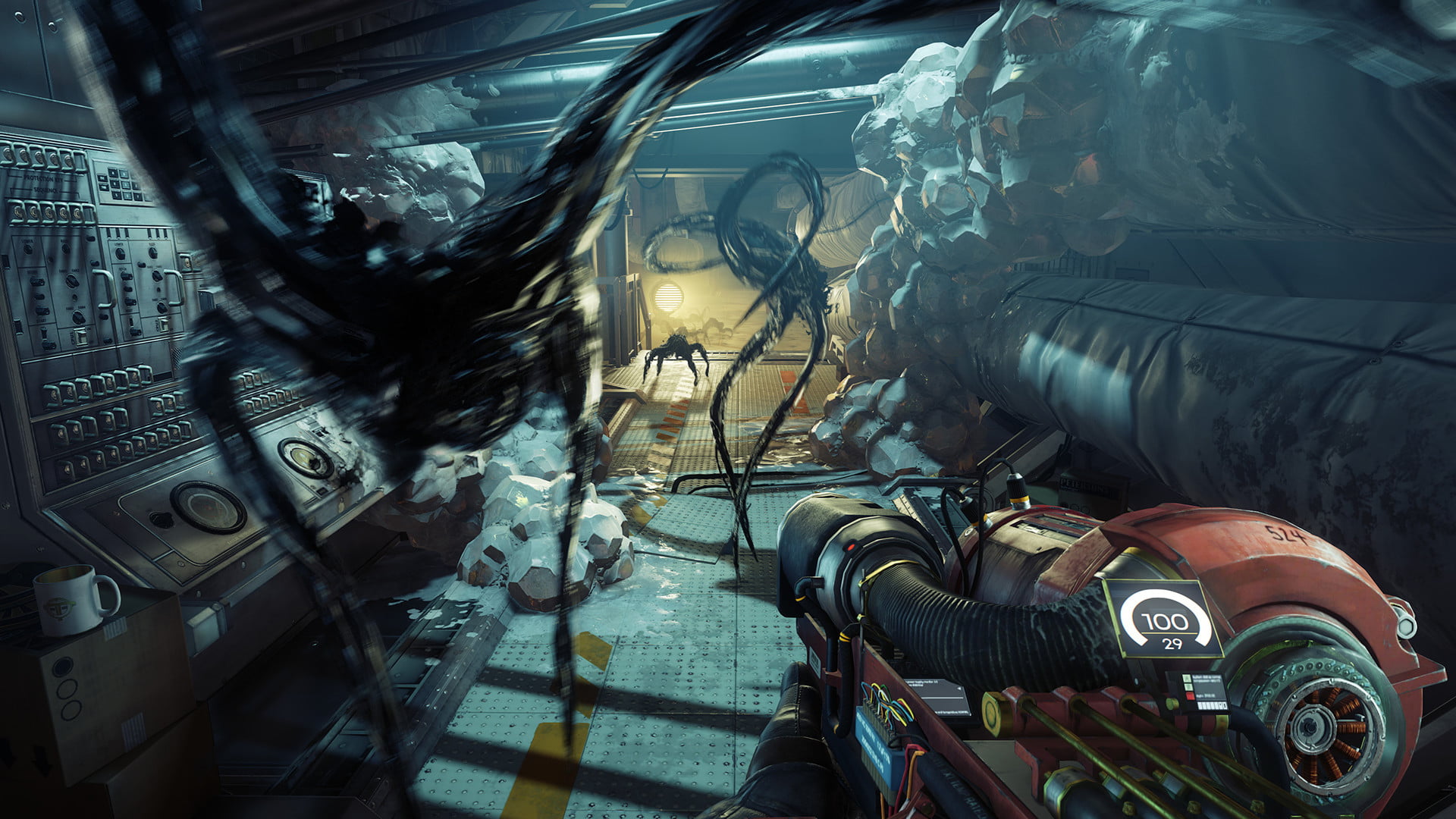 Still, there are problems in all this. Particularly, the guns themselves feel a bit weedy – they’re meant to be upgraded, so if you push through the game moving quickly and without double-checking all the stuff in your pockets, you might find yourself in the mid-late game wasting bullets on enemies that have become extremely resistant to them. Some upgrades that early on trivialise things have the hint that they’ll become useless, but then they don’t, so they feel a bit like a best choice.

There’s also something extremely unsatisfying about the stealth in this game, which is a surprise given that it comes from Arkane studios, responsible for Dishonored 2. I love Dishonored 2, and I love how its stealth works and I love sneaking around and using it – but in Prey the stealth system felt a lot more tacked on, a lot more like it had to try and play fair with a combat system with percentage hit points and resistance values.

There’s also some stuff you have to do, which includes navigating in zero gravity, in a suit with some jets on it and they let you turn and navigate in 360 degree space which is for some of you, some of you are wondering now oh my god that sounds so cool I can’t wait to do that do they do it well, please, Talen, tell me they do a good job of it and I can’t tell you that they do a good job of it, not because they did or didn’t, but because the entire experience is so terrifying that I’ve tried to blot it out many times now. It controls exceptionally well, it’s, it does its job, and boy it sure does make me feel like I’m stranded out, in space, surrounded by huge terrifying spaces full of goop monsters, only a tiny strip of fabric between me and dying forever, and ever, and ever.

I’m not big on spacewalking.

If you’re a box-ticking sort, if you want to just see is Prey pretty good at doing its job of being a game, then yeah, it is, pretty good.

The Horror Of Surviving

Prey is a game that’s excellent, absolutely excellent at what it does. What it’s doing is making you feel like a lone survivor in a terrible space surrounded by monsters that are going to inevitably kill you while you struggle to try and change the course of your destiny.

It wants you to feel alone. It’s not hard for games to do that, per se, but Prey doesn’t do it by simply making the space you’re in spartan and empty and lonely. It instead does it by filling the surfaces of the world you inhabit with things that are signs of people, of people who cared and lived and moved around and drank and relaxed and had fun and relationships and rivals and hated things and each other and they’re all gone they’re all gone and you’re all that’s left.

This game has a full manifest of every single character in the station. Every single one of them is mentiond at least twice in the various systems and storage facilities of the game. Every single one. You can find them all. You can look at them all in their artisinally placed last minutes. Nobody in this game is just a corpse, nobody’s a thrown-away ragdoll dropped in a space so the game’s engine will handle it. Everyone is where they have some reason to be, has some reason to be dead.

It is emotionally exhausting. 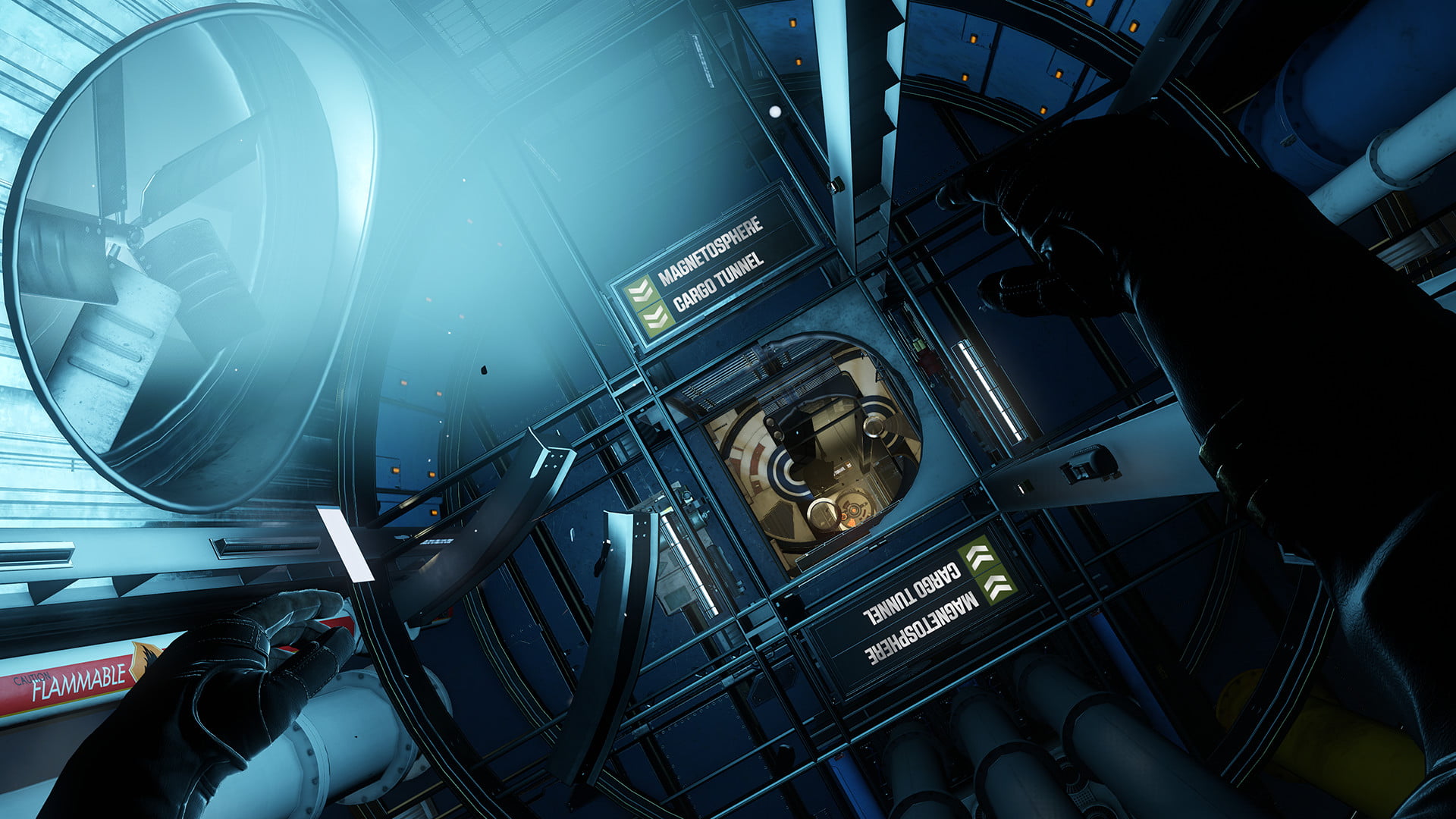 Normally when a game shows me characters I care about, and then shows me they’ve died, there’s something of an inspired need to commit acts of revenge. I get defiant and angry, I feel like I can do something by doing something, that I can fight. In Prey I didn’t. I don’t know why it is, but in Prey in particular, I instead felt the sheer empty scale of the problem, the infinite scope of it, and had to stake out an option for hope or loss, for violence or care, and found myself mostly numb and fraying by the choice of it.

Most of these Immersive Sim games, in my experience, have enjoyed something of an emotional tone that many games never consciously try and sculpt. In Dishonored there was injustice and vengeance, in System Shock there was horror and fear, while Bioshock wanted you to narrow your emotional focus from the greater issues to instead look at just whatever problem was next put in front of you on your path. When I looked at Prey after it was all said and done, the only thought I could really put to it was the game is both mourning and disdainful.

The mourning is for what it is: It is a story about an apocalyptic scenario where you are caught up in it, framed as a videogame where your choices are going to matter even if they don’t, as it were, wind up mattering. There’s a certain recognition that everything in it is a little pointless, with its infinitely respawning enemies and its elaborate upgrade system that can be pushed to make most challenges meaningless.

And then, under the hood, when you look at the opening of the game, with its sudden, end-game style ‘but wait!’ revelation, there’s this very quiet sneer at the idea of the end-game twist. 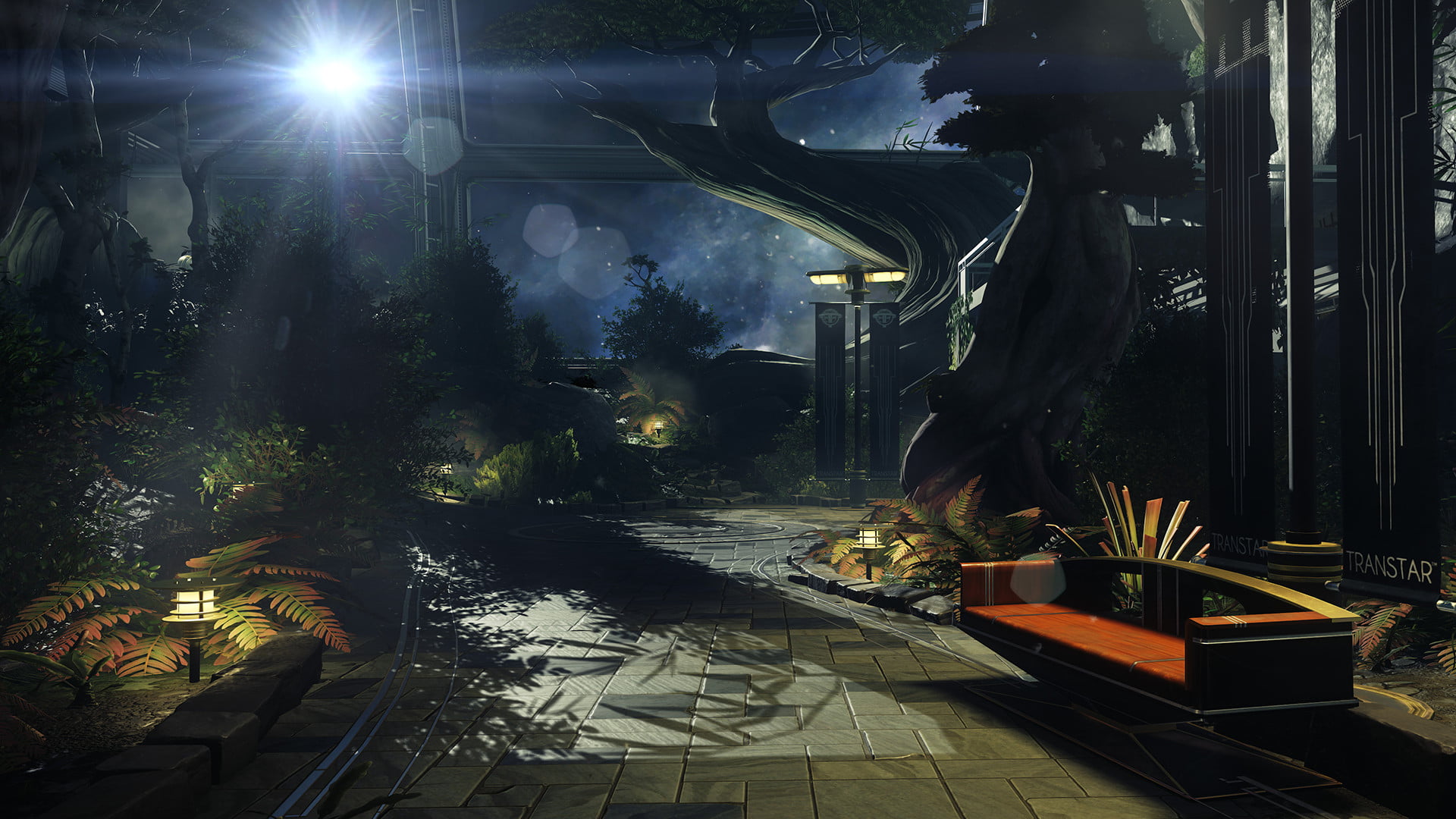 There’s an end-game twist, of course.

Oh no, I spoilered you that this suspicious plot might not go where you expect, oh nooo. Seriously, though, the important thing is the form this conclusion takes is sort of a comprehensive report card on how you did in the story, what you learned doing it.

The conclusion to the story isn’t actually something I found super interesting; by that point I was already very emotionally numb, and glad I was finishing up. I feel a bit like this conclusion wasn’t really an interesting one? It didn’t do anything with the choices you already made, or rather, it took the metanarrative of a game and sort of nested it in a way that felt a little… anticlimactic.

It does nonetheless does frame things interestingly: It changes this game from a narrative about what you did to a story about what you would do. I don’t think I’ll go back to this one for a Deeper in the Pile, and I also don’t think Prey is going to stand out as a high water mark in this genre, that mandates A Conversation. I guess that’s sort of the whole of it: Prey is great at what it’s doing, but it isn’t doing something so Important that people in general need to interact with it, it’s not going to take over the conversation of the culture or be a forgotten-brilliant-classic in the history of the genre. On the other hand, it is nice that it exists.

Someone, in a few years, is going to emerge as a great designer and I bet Prey will be their favourite game. I’m interested to hear what they have to say.

There’s some minor content warning notes; there is an example of Dead Gays in this game, plenty of body horror, a needle you stick in your eye, some medication anxiety.

You can get Prey on Steam.