Sorry, this isn’t going to be about a game you can play. But maybe you can. I wouldn’t advise it.

In Homo Ludens, the work that is often seen as base camp for clambering up the entire horrible mountain of games scholarship, a peak that is dotted about with just a stunning amount of racist, sexist, and ableist bullshit, Johan Huizinga begins, in the introduction by talking about how game playing is not a human activity, it is a cultural activity. Generous readings of Huizinga even go so far as to extrapolate from his position that games are important to culture because culture is made up of play.

It is not so much that cultures need games, but that without games, cultures wouldn’t exist; the capacity to give and take, to test and tease, is part of how cultural entities react to one another, and that, Huizinga-interpreters suggest, is one of the building blocks that means you transcend from existing as groups and packs, and begin the communication interchange that forms a culture.

I’m by the way coddling this because I read Huizinga a few years ago, and I read a translation so I’m always nervous of telling people what was in the text if I can’t provide chapter and verse quote. There’s a lot of stuff in Huizinga that isn’t really as prominent as you’d think it would be considering you have the phrase The Magic Circle bandied around everywhere but which Huizinga kinda only mentions once, and not in much depth.

Anyway, the thing is, any human reading the book is a byproduct of a culture and that culture has play already in it. If you want to talk about universal traits of cultural projects one of the easiest ways to prove you’re not just supposing things out of the air is to look around and find places where we can find the rule holding that aren’t necessarily obvious and which reinforce your point Where Clown-Hater and Skulldick Cultist Roger Caillois favoured pointing to ants getting high as his proof that there’s a fundamental desire for what he called ilinx, an idea that exposes a lot about how what he thought about how ant brains work, Huizinga’s introduction examines something a little more relatable as far as humanlike minds go:

He draws the comparison to the fact that wolves, without human interface, will play and invent games.

This is a point that I can remember because it shows up in the introduction and I was deathly afraid of mentioning it in my essays for fear that I would be asked about something much later in the book that I hadn’t gotten to yet. It’s also not a thought I think about too much, because I don’t tend to think about Huizinga much at all.

Then we got the Kong Gyro Ball. 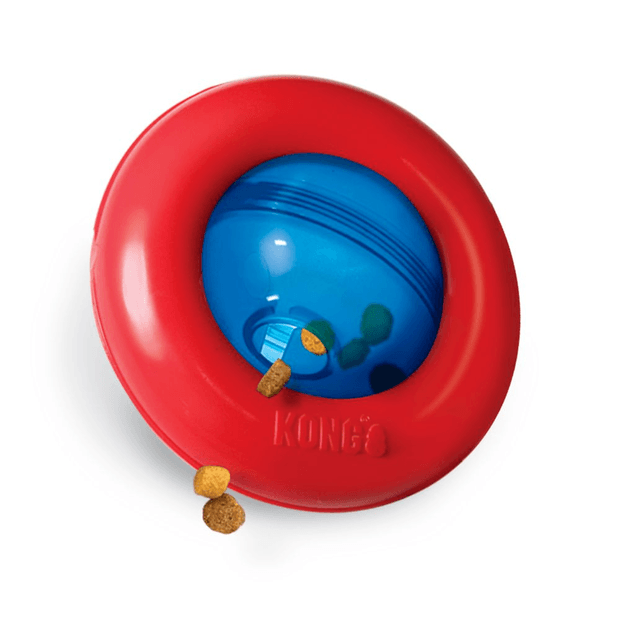 We have a dog. His name is Elli. He is a good dog, and his name is a great litmus test for who can pay attention to being corrected on pronouns. Elli is a whippet, and Elli has anxiety. Elli doesn’t like other dogs much – he’s intimidated by them, and his reaction to them is to try and run at them very fast and bowl them over, or while making a lot of noise. This is non-ideal behaviour. Elli is also extremely energetic when he’s active – he wants to run really fast for about… a minute then come home and flop down for a few hours.

Lockdown has not been kind to Elli. First, due to the cold air and existing respiratory problems, Fox has been unable to walk him very regularly. That means I’ve been doing it mostly, and when the weather is rough, it’s not doable. Plus, because of his anxiety, we want to walk him when nobody else is – which has made for midnight walks, in the extremely cold weather, which isn’t great.

Fox has done something for him, though; of late, we’ve been feeding him out of the Kong Gyro.

This isn’t sponsored, by the way! This really is just a product we use in our house, and just because Fox or I play a game doesn’t mean we’re the only people who can or do play games.

It’s a pretty simple little toy; you put his food in the ball, and then he chases it around the house trying to get the food out of it. Thanks to a sense of smell and a sense of disappointment, when the ball stops paying out food, he’s pretty able to extrapolate that it’s empty (thought not always). It extends meal time, it adds interest and it gives him something to do in just about the right unit of time. Elli is not a dog given to enormous expenditures of stamina after all.

I didn’t think that much of it – it’s a thing we did, because it gave him exercise. We were making his dinner and breakfast difficult, and we were doing that because it needed doing in the circumstances of the world right now.

One night, we couldn’t find it.

We went to feed Elli, in his normal bowl, and – like, it’s hard to say for sure how to explain this to people, but he seemed profoundly disappointed when Fox went for his normal bowl. Oh, excited – because biscuits are biscuits and chicken is chicken – but still, he looked around for the Kong. And then, in response to that, I resolved to go looking, to try and find it, even moreso because because damnit, he wanted his lunch planet.

When I found it, it was in his bedding curled up, and under a blanket.

He had emptied it, eaten out of it, then carried it with him, empty, to be near him while he slept.

Now, the next big lift here is the question: are dogs non-human?