Overwhelm is a 2018 action-horror exploration platform game that uses a palette that feels gameboyish except instead of green and dark green its palette ranges between white and oh dear red. It’s not a specific hardware style I recognise – you wouldn’t call it ‘1-bit’ or ‘4-bit’ graphics as if that answers questions easily, but it does have that same crisp few- colours-deployed-sparingly of other indie classics like Downwell and Minit.

In this game, you’re presented with a minimal story that’s shared with you in a very ‘live’ format – scenes are deployed to you while you still have control, running around and pushing onwards while the world around you gets darker and more dangerous. The tagline for the game is that the enemies get powerups and you don’t; the world justification being that you’re a knight, sent into a hive to kill it, which you must do by defeating a number of large, dangerous monsters that spread knowledge to the rest of the hive when they die. This is phrased as the hive is evolving.

The game controls with a sort of ‘chunkiness’ to it – you’re mobile and agile, but in a way that asks a lot of your reflexes. It has a mouse-aiming platformer style that I will always think of as ‘like Abuse,’ a PC platformer that wanted to be Alien Vs Predator so very badly that most people don’t remember, and it is hard 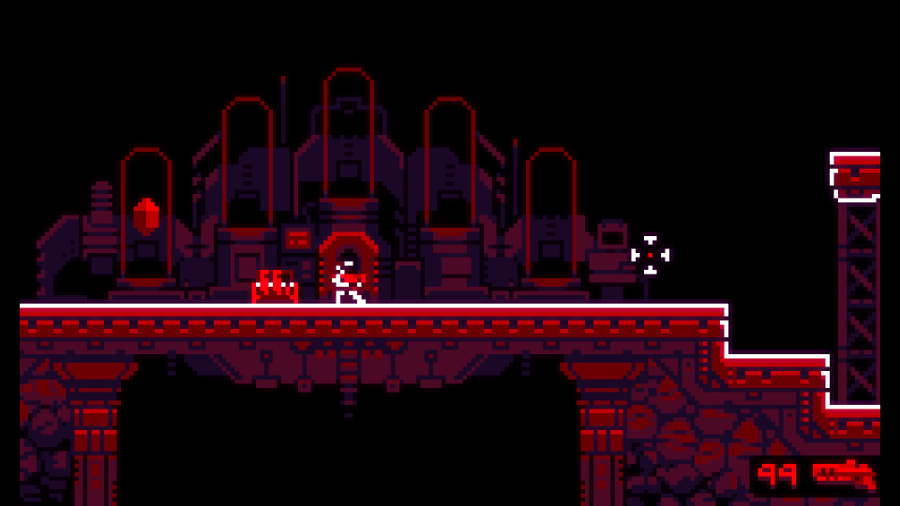 In this game you die to a single hit and while the enemies start that fragile, they don’t stay that way. Exploration gets harder as the enemies start populating more of the routes through the area, and environmental effects like darkness and stealth start turning your journeys into the belly of the beast into exceptionally difficult affairs of frustrating lost progress. What’s more, if you die a certain number of times, the whole thing is lost – you do have to finish the game, on default, within a very small number of deaths. The game offers a bunch of options to make it easier, settings that included adjustments for reflex speed and adding more forgiving waypoints and extra lives. I didn’t turn those on – I just used the game at its default.

I played it for a while like this, then, considering that I was having a hard time beating one boss, and had a hard time reaching a second one, that I was done with this game, would mention that it was cool but that I didn’t have much more to say about it, and then move on with my life.

And then a friend mentioned something to me.

What he said was that in an industry meeting, he learned that players are more likely to quit a game than turn down the difficulty.

I thought about that for a bit, and set all the training wheels on for Overwhelm. I turned the difficulty way down and tried it again, and this game that seemed unbeatable became an afternoon-long, fun, interesting, aesthetically fantastic game experience that was easily worth the $10 I paid for it. I still died, and I still lost, and I still had to reattempt a few parts – but I did not find the game a wall any more, because I could get purchase on its hard points.

This is really interesting to me, beacause on reflection, there was no reason to keep the difficulty high. You’re not watching me play, and you’re not reading this because you’re under the illusion that I’m an excellent player of games. Statistically, you’re here because you liked the Death Note Is Bad and Super Gender Feelsy Book Covers. The point is, my skill is not important, my ability to look at a game and consider what the game teaches me or stays about itself, or its story, or games in general is what you’re here for. 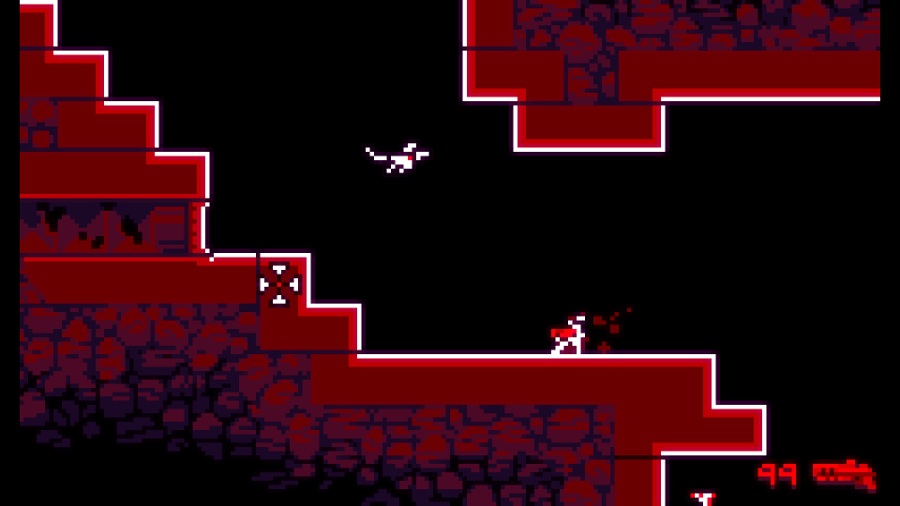 What Overwhelm got me to think about was myself, and that impulse. That for lack of a better word ‘gamer ego.’ The idea that there are games I may have stopped playing rather than replay on lower difficulties. That’s weird! That’s a weird behaviour, and it’s weird that it’s a trend.

Overwhelm is really good, and part of why I don’t mind telling you it’s really good is because if you’re better than me, it will probably give you a lot to dig into and if you’re as bad as me or even worse, there’s probably a few days’ worth of play in this tight, interesting little aggressive exploration platformer. The idea of a reverse ‘metroid’ game where you defeat bosses to make the game harder is a great one, one I’ve even toyed with in other times and other places, and there’s an idea there about external versus internal sources of power, and how we interpret challenges as external and powers as internal, and that’s all cool, but I keep coming back to that simple statement.

Players are more likely to quit than turn down the difficulty.

You can get Overwhelm on itch.io, Steam, and it’s on the Switch store! Check it out, it’s real good.