Yarr! Buckle up, me friends and hearties, time to talk about a classic of the point-and-click genre that’s got itself a remake on Steam!

It’s almost boring to heap praise on Monkey Island. It’s funny, it’s charming, it looks excellent, it varies its interface, its play experience complies with its wonderfully try-and-see approach, it subverts key-in-door design. It’s a point-and-click adventure game that, even at the nascent dawn of that particular genre’s life, has a wide variety of really interesting different ways to solve puzzles. It’s a game that, recognising you’ll spend your time with one character, makes that character interesting without being obnoxious or mysterious! It’s a game that rewards replay and doesn’t leave any mechanic underexplored!

Honest to goodness, Monkey Island is kind of boring to describe anew at this point. For anyone genuinely new to this, Monkey Island is a point-and-click adventure game with a slightly arcane interface that’s been updated in ways I can’t, reasonably, compare. You play Guybrush Threepwood, a twerpy, skinny Goodboy who has arrived on Melee Island™ to try and Be A Hero Pirate. Your literal first encounter is a blind lookout, who then sends you to deal with three mighty pirates who simply spend their time getting absolutely smashed in a bar, and that sort of sets your tone: you’re engaging with a pirate story but it’s a pirate story that’s full of utter ninnies. 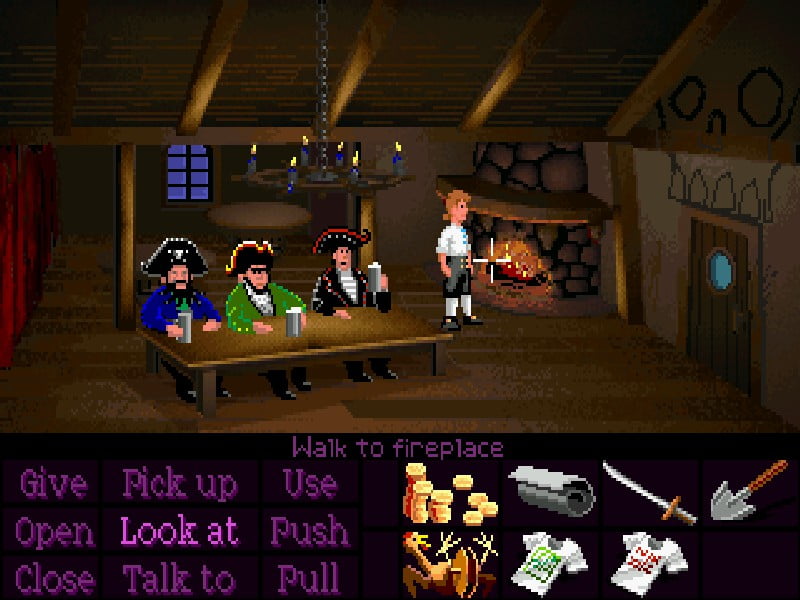 The basic comedy of Monkey Island is built around people who are ill-suited to the task they’re stuck with, and nobody is more ill-suited than Guybrush. Guybrush is a nonviolent sweetheart who can’t bring himself to be cruel to random animals in the first game, even ones that threaten him, and he’s afraid of most things that would involve some kind of violence. All his solutions are, in a fashion a kind of guile solution. Not cleverness, either – he’s not actually very smart. But he does take opportunities that he can, when you, his third party observor, present them to him.

What this tends to mean in the setting is that almost nobody you deal with is really all that bad even though almost everyone you meet is frustratingly uncooperative. What’s more, people are also funny, so interacting with them to work out the source of their own personal lack of cooperation is still fun. 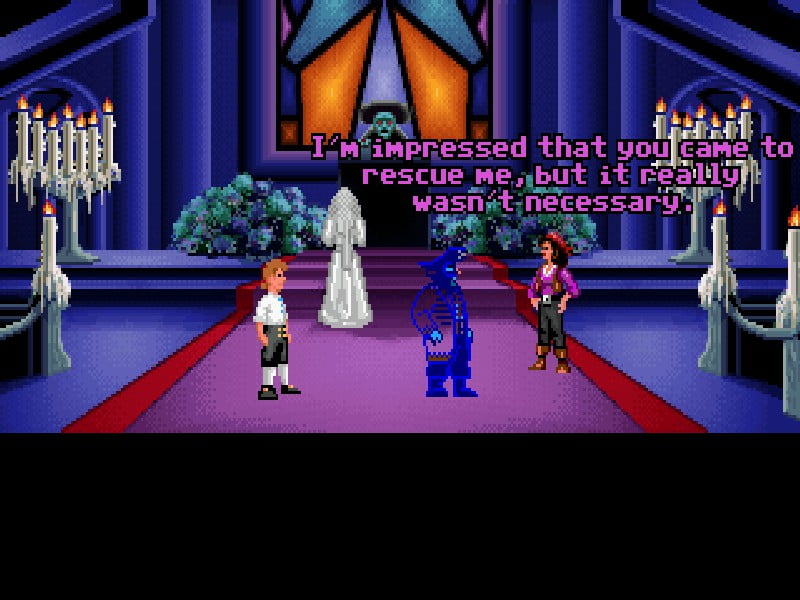 One of the other things about this that I really like is that for all that this story could be forgiven for having Very 1990 Attitudes towards women characters, this story – which features a kidnapped princess as it were! – actually doesn’t leave her there. The governor escapes on her own, she takes care of problems on her own, and you only wind up saving the day because of a coincidence of circumstance – and you have to because you’re the one who messed things up.

At the same time, her interest in Guybrush is connected, crucially, to something about him that is actually deserved: he’s cute, and sweet looking.  She notes how poorly suited he is for the career he’s pursuing and tells him. He doesn’t deny her this, or provide a counterpoint, and the story after that isn’t about proving her wrong.

And I think that’s neat.

The problem is, you might notice, none of the pictures I’ve shared here are pictures of the Monkey Island Special Edition. I mean, they are, but they’re also not: These are the graphics of the original game. The problem – and I’m reluctant to call it a problem – is that I played the game with its new, fancy appearance, and after two minutes, changed it to the original look and left it there for the entire game.

Voice acting? Maybe good. I don’t want to hear it. I especially didn’t want to hear someone imposing pausey spoken dialogue to the comedic timing of the read text. I didn’t want to play the game without the escape button to skip repeated cutscenes like you could on the old version. I played the game with a finger on the ., the button that let you finish a chunk of dialogue and scroll to the next. Like a speedrunner, I wanted to set my own pace.

Changing it back and forth was just enough effort that I never ever felt I wanted to check how a scene would work in the new look. I never cared enough about it – two menus down, always interrupting the play of the game. And this is a game that doesn’t really have a pace or a flow – it’s a game that’s much more about sequences, rather than really getting into a rhythm. 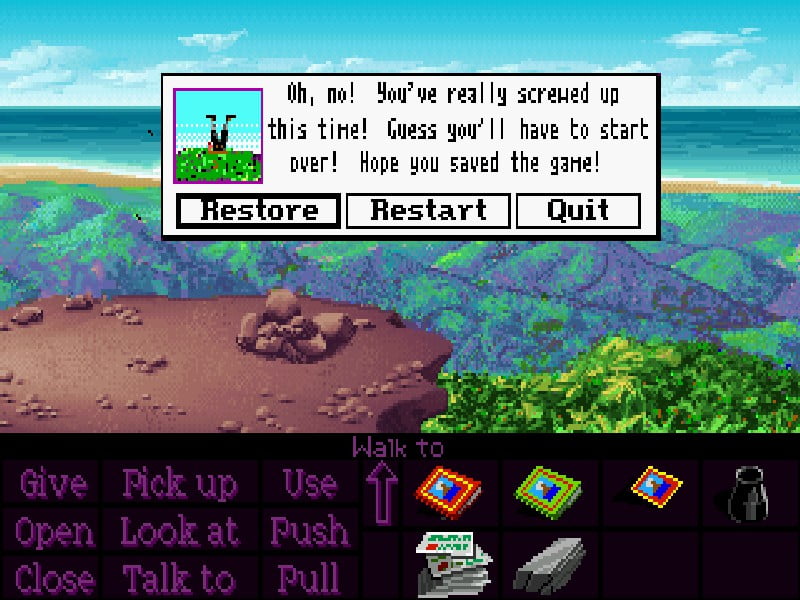 What this means is that this is less of a review of the remaster of Monkey Island, as much as it is a review of how much I personally enjoy Monkey Island, a great little point-and-click adventure game from 1990. Is the game still good? Yeah! Did the remaster add anything to it? Well, it meant you can buy it legally and it’ll work on your Steam computer, which is nice!

Is that enough of a reason to drop fifteen dollars on a game that odds are good you’d never play again – or the first time – and if you’re of a certain age, you probably stole once?