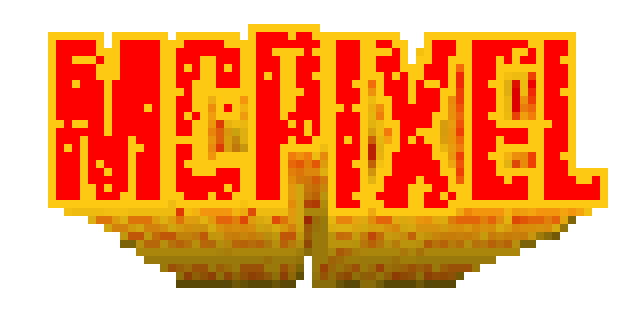 It’s also not really like any of these things.

McPixel is a game made up of tiny puzzle vignettes, mostly single-screen scenarios, where you’re presented with one very simple end-goal of avert disaster. You have no inventory, no consistent rules for how you interact with the world, and no real narrative as we conventionally explore it. Instead you’re given a slapstick approach to short, barely-interacting puzzle components, twenty seconds to test them out, and almost every possible interaction that doesn’t solve everything will in fact ruin everything, resetting the scenario to square one. I’d say it’s a ‘fast paced’ game but even that feels a bit misplaced. It’s more like the game is dreadfully frustrating until it’s childishly simple. Many puzzles in the game are designed around finding just the right pixel to click – very rarely are puzzles about clicking a sequence of things, and even more rarely are they about obvious interactions with the items around you. Sometimes threats and problems will ruin your efforts out of literally nowhere.

If any of these scenarios existed in a game on their own I’d happily decry the game as being a bit crap. It’s all a bit like those worst moments of Sierra games, where get it right or you’re screwed flash out bright and loud across the screen. What’s more, the narrative and storytelling the game even tries to do is ridiculously referential, and a number of the puzzles are literally pixel-hunts, trying to find the exact right spot to click on to proceed properly.

I made the joke when I was playing it that McPixel is like a Newgrounds game that escaped, which seemed like a pretty sick burn until I went to the directory and found a .swf version of the entire game.

In many point-and-click adventure games there’s an aimlessness that modern participants of the form have never really been able to fix. Conveyance has always been a problem for games that purport to be thoughtful and puzzle-oriented, full of exploration of strange potential interactions, where sometimes a player can simply miss a detail and spend hours beating their head against it.

Most often, in the mid-90s point-and-clickers, the ones that really define the genre for Old Jerks Like Me, featured long stretches of the game where you didn’t really have anything to do beyond a vague goal that seemed almost impossible to reach, and an ever-growing collection of bits and pieces of stuff that you couldn’t necessarily see working to achieve your goal. The point-and-click game was one defined by helpless meandering, by rubbing things against one another (I call this the cheesegrater problem, and I really should have written an article about it by now). Nonetheless, in these moments, you would often solve part of a puzzle without ever realising it, and when you put the pieces together, there’d be lovely moments of feeling Very Clever Indeed.

In Simon The Sorcerer 2, there’s a point in the game where you have some green dye, and there’s a fountain. Well before you ever need anything dyed or anything greened, you can just pop the dye into the fountain and watch people’s reactions to the sudden green-ness of the water. Then, maybe an hour later in the game, you need to dye some fabric green to make a crocodile costume – and a light goes on over your head to say Ahah, that’s why I can dye the water! These sorts of puzzles moments are quite exciting, when you find that dream logic the creator of the game had in mind.

McPixel is trying to be a game composed entirely of those little Ahah moments. It’s using humour, a deliberately retro-minimalist aesthetic and a simplified interface to emphasise that style, and it sort of works? At the same time, this is a point-and-click game boiled away until there’s nothing remaining of the charm or style that makes those moments worthwhile. Mostly, because the puzzle solutions are designed to be counterproductive and ‘lol random,’ you’re doing more cheesegrater stuff than any kind of ‘puzzle solving.’ In the end it makes the solutions to puzzles sort of obscure, and the humour tends to be fundamentally scatological and basic.

The other side of this is that it’s a bit hard to complain about a game being obscure when you can finish the whole thing in about an hour.

In the end, McPixel is an odd little diversion that tries for something, and is mostly held together with piss jokes and references to other media. If those things work for you, it’ll pretty likely be amusing and you might find it an interesting little distraction. That it didn’t really work for me doesn’t mean the game doesn’t work at all, and the game does have a bit of heart to it.

You can get it on Steam, Desura, Googleplay and the App Store, all linked handily through the official website.