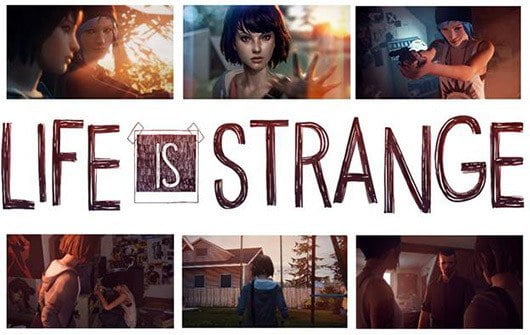 Life is Strange is a game which touches on a lot of grim subject matter. The advertising copy and presentation of the game is deliberately obscure stuff, and if you followed the game in larger spaces you’ll probably get the endlessly unhelpful comment of ‘just play it’ or ‘it blew my mind’ or, even more unhelpfully, ‘Chloe is really hot and I hope the girls kiss.’

What follows is a spoiler-free review of the game, in that I will not be revealing details of plot, but I will elaborate on plot beats in a broad sense just to work as a sort of content warning.

So first things first, in the first episode of Life is Strange, we see a school shooting. Later in that first episode, a character describes being sexually assaulted (though the narrative takes pains to indicate it didn’t go ‘too far’.) Then as the story continues, just off the top of my head, the story deals with more sexual assault, drug abuse, domestic surveillance, organised surveillance, corrupt authority, alcoholism, suicide, weaponised suicide, animal abuse, animal death, people going missing, extensive disability, assisted suicide, parental bereavement, mass death and the willingness to kill.

What I’m saying is Life Is Strange is not a game that’s fun and its vagueness in advertising it is kinda… gross, to me. But we can deal more with the weight of the subject matter another time, when I can talk about it at length. If any of that above is stuff that makes you uncomfortable, maybe don’t play the game. It’s okay. You won’t be missing anything too important if you skip the game for its themes.

Woops, guess that’s my opinion given away.

But What Is It?

Life Is Strange is a narrative-focused story game where you play a teenaged girl with time manipulation powers. It’s created by Dontnod, the minds behind last year’s disappointment Remember Me, a game with aspirations to being thoughtful, multifaceted and engaging. When Life Is Strange launched, I had this to say:

Keep an eye out for Life Is Strange. It’s very possible it’s going to be The Best Bits from Remember Me as a whole game 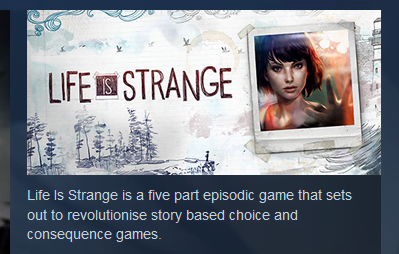 Now I know I get nettled easily by this sort of thing but boy howdy does this sound like the game is already lodged firmly up its own arse. Tell me about the game. Don’t tell me what you’re hoping the game will do to the industry, you jerks. Tell me about why I should play it.

As it stands, the reason most people cited for why you should play Life Is Strange comes down to queerness-as-currency style ‘Chloe and Max are really cute together.’ That can be as good a hook as you want, I suppose.

Myself, I’ve got my own verdict – you’ll see it at the bottom of the review, but if pushed to it, I’d suggest Life Is Strange is like playing an edgy Young Adult Fiction novella. It’s reasonably short, broken into chapters so you can exit it conveniently, full of small details you can choose to interact with, and seems to have replayability in it. Plus, there’s a lot of character to it. People use distinct voices in text messages. Even when there are major changes, characters maintain some of the sense of who they are. There’s mostly a good mix of gameplay styles, too, with stealth sections and pixel-hunting puzzles mixed in with what’s mostly dialogue-based problem solving.

In addition to that, the game is focused on a young lady protagonist and her interaction with other women her age and adults much older. She’s in this middle place of college, where she’s dealing with people treating her as if she’s very young but also treating her like she needs to step up to a new level of responsibility. There’s a really authentic feeling to the characters in this game, particularly in how they react to the environment. When you’re in a point-and-click game, you kinda get a lot of a character’s meaningless internal chatter, and the chatter you get out of Max is pretty consistently interesting, lent variety by her voice.

So, story based game, evokes a genre well, conveniently playable, cheap, and does a good job with characters, so … all good? All thumbs up?

How It All Goes Wrong

I wrote about this game as I was playing it and made sure to commit to those opinions, in a way I don’t normally. It’s good to hedge your bets when you’re talking about games, even when you’re just tweeting about it in a funny way. If you say something that you change your mind about later, you can run the risk of confusing people. You leave them wondering which of the two sentiments was the more sincere.

When you’re talking about how games can go wrong, basically the worst place to get things wrong is at the ending. You can forgive a lot of a game that hooks you in well, or that has a wonderful play experience in that bulky middle which comprises the majority of your interaction with the game. But if the ending of a game – especially a narrative-driven one – is bad, then it sours the whole experience. This is even more of a problem if a game has problems in its storytelling. So often those kinds of games will string you along saying okay, this doesn’t make sense, but trust me, when we get to the conclusion, this will work. A more cynical friend of mine has referred to this as the Lost effect.

For my tastes, Life Is Strange is an interesting game, somewhat engaging, that so often veers into hamfistedly trying to handle ideas that it’s simply not competent to handle. This incarnates itself in an ending which I will politely call a let-down. If seen in the most positive light, it’s amateurish and bad. Still, it is roughly twenty minutes out of a five-hour game, so is that so bad?

I’m personally inclined to say yes – but we’ll have to talk about that more, later.

You can buy Life Is Strange via the Humble store and through Steam. Crucially, a point I’ve left out of this is that the first episode of the game is quite cheap, and even goes on sale. If you’re curious about whether or not you’d enjoy more of the game, consider picking up that first episode and seeing how you feel about it. Recognise that in that first episode, you’re there for the character and the feel, and not any sort of greater, coherent narrative theme and you should be golden.