Sometimes I feel a tiny bit bad talking about board games that are just really good here. There’s always some sort of impulse to make an examination into a story, for there to be perhaps a certain degree of turnaround or some surprising element to the whole experience of reading it. I know when I talk about Pokemon games, and Button Shy games (usually, though not always), I have a certain, hands-in-the-air ‘well it’s excellent and worth your time, I guess,’ 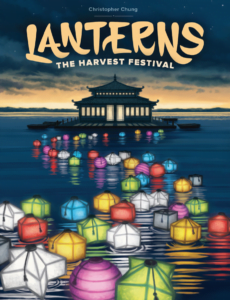 Lanterns is what I consider a small-box light-weight game. Not a starter game, which wants to be simple enough to get people playing and enjoying one another, but rather that sort of mid-complexity game that talks about sets and victory points but crucially hasn’t got the kind of game rules manual that says (see subsection 3). It’s a theme-light abstract game about laying tiles, thinking about a lantern festival. It’s an example of what the 3 Minute Boardgames Youtube Channel refers to as a foundation game.

The mechanisms of Lanterns are pretty simple. There’s a starting tile, there’s scoring tiles, there’s little roundy chippy bits that you can cash in and a reminder card, but all that stuff aside, your turns are going to work out the same way: you place a tile. The game checks to see what cards you get based on the tile you lay, and then you get them. Then the tile checks what the other players get when you place it. It’s a lovely simple system, too – if the green lanterns on your tile are pointed towards you, you get a green card. If it’s pointing at the player on your right, they get the green card. Complicating this is when you match types of tiles, you get a card of that type, too, which means suddenly your turn – where I will remind you, you’re just placing a tile, of which you’ll have at most three, is this complex matrix of spite, spatial matching and set collection and you don’t even notice this while you play it.

The first time you play it, you’ll hear people giving a satisfied coo as they place a tile to get what they want, and then the next player gives the same sound as they realise they just got handed a card that means they’ll collect the best scoring tile next turn. Then, over time, you’ll listen to those sounds almost in reverse: Players will place a tile and the player next will hiss as they realise the spot they wanted or the card they were hoping for doesn’t come their way.

Lanterns is a highly material game. The actual narrative of what you’re doing is extremely nebulous, and the systems – or system, really – are all very clear in their presentation before you. It’s a game where you compete with one another in what you’re excluding one another from, but because your actions naturally shed game pieces to other players like a samoyed drops hair, you can’t help but advance other people’s plans or introduce new plans accidentally. This means you’re competing and tangling but it’s just very difficult for anyone to blow anyone else out. Eventually you come to realise that predicting the game four or five steps in advance is going to be impossible, and you just start to make the best next step you can.

It’s a game where politics is difficult, system mastery doesn’t give you that much of an edge, and you’re mostly looking at the one system in front of you, over and over again.

And that’s kind of it. Lanterns is an excellent game. There’s stuff I wish it did differently – the setup is just fiddly enough that introducing it to people can get them in that rictusy position of ‘oh no, how weird is this game going to beeee,’ and the rulebook does jump back and forth – but that’s a small concern compared to other starter games of the same level of complexity.

I think the thing for me that will always serve as an example of a game’s excellence – and it wasn’t just mine, but brought to my attention a long time ago with Magic: The Gathering – but the real mark will be that as soon as you finish playing it the first time, someone asks to play again.

I first played this game with my sister. When I was done, she asked to play it again.

I don’t get to see this. Not very often. Often when I’m sharing board games, I’m doing it as the person who brings and buys them and I sometimes see other people who are interested in playing as a sort of precious resource, someone who can bring animation to these toys of mine and help me enjoy them, so I’m always delighted to play them. It’s weird, I rarely feel unhappy with board games, because I almost always am glad to just get to play them. When a game really upsets me it’s well afterwards when I realise I don’t want to play it again.

So then to sit down, playing Star Realms with a nibling, and teaching the complex game and see my mum and my sister and my partner all playing a game without me pushing it on them, to see them engaged and making the same sounds and learning and to end with my mother saying she looks forwards to playing it again was amazing. It was wonderful, but it was also exciting. It’s not something I get to see very often.

Lanterns is a great board game to keep around if you’re not looking at building a big collection, by the way. It’s small, economical and it’s rewarding to play and replay. A good evening game for a night when you’re trying to step down on screens, for example.