I sometimes am cautious of putting something on my blog that feels like it’s basically one big tweet. This is especially so since we got 280 character tweets, which means it’s very possible to give a very clear, positive or negative impression very conveniently, especially with a single picture attached.

Also this is one of those games with such a beautifully ridiculous premise that if I just show it to you and tell you what you’re playing for, you will almost certainly know whether you want it or not. 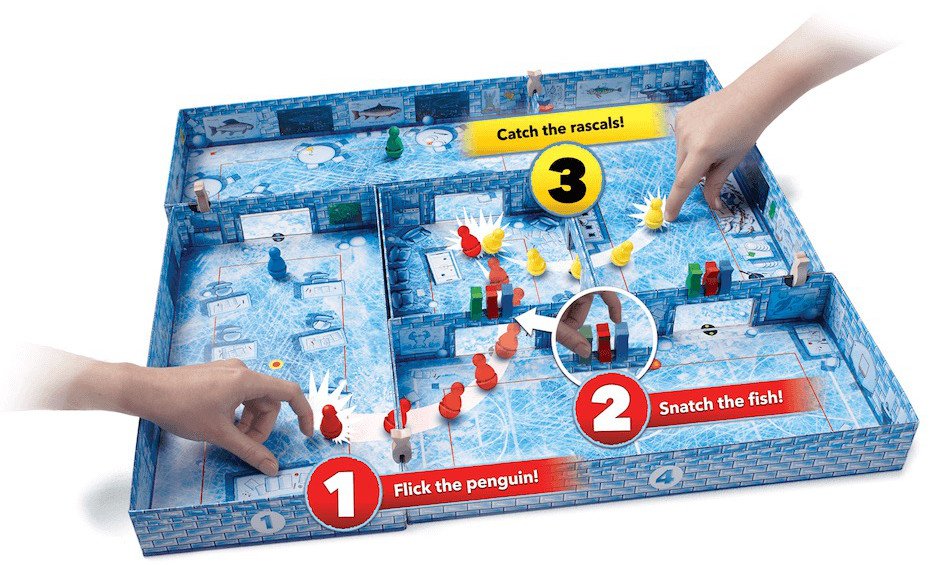 That’s it, that’s the core of what you need to know about this game and that’s almost all there is to it. There’s no classes or special abilities or complex rules to manage. There’s no expansion pack or complicated twist or oh no, the penguins are secretly cannibals or anything like that. This game is almost pure kid game fun, with the only mastery depth being about how much hand-eye coordination you have but even if you’re as clever as batpenguin, you’re always going to be dealing with an unpredictable object in a game space deliberately designed to present you with unhelpful difficulty. It’s got a catch-up mechanic, it’s got a way to ambiguate the leader in any given game, and it’s really convenient to set up or pack down.

Like I said, you probably know whether or not you want a copy of Ice Cool based on just that pitch. There’s no plot arc or characters for me to step you through or content warning medium to package for you approachably.

Board games are also hard to write about! One of the trappings of ‘game review’ culture is that you describe the game loop, broadly speaking, and sometimes you describe it even down to the specific granular interruptions and then you tell someone how you feel it all came together. It’s a model of a game review that suggests that to some extent, the fundamental play experience is the important objective detail and the value of the game can mostly be extrapolated from that.

Now, okay, what if you have interest in other dexterity board games? What if you’re juggling prices between say a Crokinole board, Catacombs, or Flick ‘Em Up or Wobbegong-12? Well, first, that’s very flattering, but we know that Wobbegong-12, a $10 casual game isn’t in the same ballpark, and Crokinole offers you an object that’s a very nice thing to have in the house.

What I’d like to say about Ice Cool though that sets it apart from Catacombs and Flick ‘Em Up is an issue of containment. Everything in Ice Cool fits in its box. Everything, including the rest of the box. Setting up the game is done with the same pieces that are used to play the game. Catacombs is a wonderful, ridiculous, enormous game, but it’s just that – it’s big. You don’t get to play a short game of Catacombs; You need the campaign to justify the time it takes to set up. In Flick ’em up there are layers of rules to handle the scenarios and the scenarios are apparently a little bit pants as well.

By comparison, Ice Cool is remarkably quick, over in ten or twelve moves, and the process of tallying up or resetting the game is very quick. The game lacks for variety, but it’s a game where every one of its repetitive plays will be chaotic and silly and full of breath-holding moments where things can go all right or all wrong.