Oh hey, this game, this atmospheric and thoughtful and meaningful game that’s really good and looks really good and it’s full of execution-based skillful exploration and look we’re talking about Dark Souls and then we’re talking about the statements the author made about the game being about living with a terminal condition and it’s ten dollars and here have a review score, pick the one you like, 7/10, 90% and 5 stars. 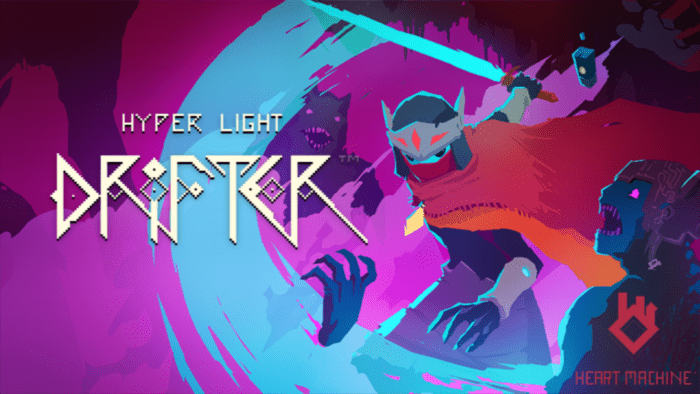 Oh and hey here’s the image for the thumbnail, that’ll make people intrigued enough to click.

I sat down tonight and played Hyper Light Drifter for half an hour. During that time, I had OBS running and Audacity, and I recorded myself playing and I recorded me talking about a bunch of ideas that I had in mind when I opened the game up. The idea was to make a video for Youtube, as an experiment I don’t normally do. Like, I’ve recorded myself playing Assassins Creed, a game I’ve played a lot, and shared it with you all while I talk about things like identity and memory. So far so good. I did something like this with Hollow Knight, a game I played earlier this year while ill, with a deadline bearing down on me.

The Lets Play model is really good for a particular kind of rhetorical consideration; it lets you work out what you’re talking about, the game can take focus as a natural beat between your ideas, you can use the repetitive bits of the game to build a thesis. I do want to do more of it (and I’m investigating ways to make better, long-form game play experiences over on my Patreon if you want to be part of that conversation).  But this time, a combination of my difficulty with the game, and my own distraction and my brain planning three steps ahead for tomorrow meant that when I hit a stopping point, I asked myself:

Would this be fun or interesting?

And I decided not to; to shelve it until I could try it again. I have some faith in the form. Still part of the problem was that I just didn’t want to talk about Hyper Light Drifter. It’s a cool game! It’s a great game! I also don’t mind that I’ll never play it, or finish it, not really.

I think about this a lot when the conversation about piracy comes up. Piracy’s a problem, sure, ostensibly. I don’t think businesses that run on piracy selling stolen game codes, for example, should exist. I don’t think the people who pirate my games (and they do) are doing me any favours, and if they act like they’re doing good by doing that, they’re lying to themselves. I try to make my games as rewarding an experience as pirating my games is, but I can’t beat ‘free’ as a price point, so the rest is going uphill.  The conversation about loss through piracy and refunds tends to view the fear of people having games that they didn’t pay for, that they are playing.

Also, I think as someone who grew up during the early internet, a time when piracy networks were pretty sophisticated and surprisingly unlikely to get you a virus, it’d be pretty hypocritical of me to act like I didn’t understand the meaningful arguments for why people do it.

The thing is there’s this other side of it, where people have these collections of games, full of games, where we just don’t play them. I am doing a concentrated project of knocking games off my list of ‘to play’ and it’s slowed down a bit in these past year or so as I add more board games to my collection, but I still have hundreds of games and I’ve played about half of them to the point they’re ‘done.’ This is a collection that’s featured lots and lots of long games, many games purchased on sale, but many more that weren’t, as gifts and on my birthday. That value, that expenditure just… kinda… sits there. And I know I’m not alone. Like I’m someday going to ‘get to them all’ when really, the better thing to do for my mental wellbeing is to play them enough to see if I’m going to like them… and then let them go.

The reason I was trying to play Hyper Light Drifter tonight, a game that is, again, really quite good and yet I am not interested in finishing at all, was because Steam is running a promotion they refer to as ‘spring cleaning,’ in which an AI robot tries to tell you what games in your collection you might want to play next, based on tags, your behaviour, and similar user behaviour. This time, it told me to give Hyper Light Drifter and give me a little gamification token if I did it.

The final little bow on this experience, then, is for Steam to try and recommend to me what I should be doing by recommending to me that I, right now, want to play someone dying from a coughing illness in the aftermath of a near-eternal war that wrecked everything while dealing with constant nightmares. Like why wouldn’t I want to play that right now. Maybe it’s just that the robot hasn’t recommended it to me.

What’s the solution to all this? Well, it’s not smug robots.

I might suggest that if we were able to make games unshackled to profit margins from that practice, and games were being made by the people who wanted to make and express them, then maybe we’d get better games, like some sort of universal income system or something like that, like if the entire games industry was in a union that negotiated a standard wage, or, or, hey, why not the whole country or even planet or –