I’ve gone back and forth on whether or not to talk about this game, because I feel that it’s almost like a big tweet.

Handsome is a Button Shy wallet game. Sometimes we get these game terms where you might be a bit lost by what we mean, like a hidden identity or bluffing or secret identity or whatever, but this one’s about how big the game is. A wallet game is a game you can stick in your wallet. It’s tiny, it’s so small you can carry it around with you everywhere. This is something Button Shy do really well, with regular kickstarters for very small games.

I keep a copy of Sprawlopolis in my bag all the time now – it just lives in the little section of things I never have to check because odds are I’ll always want one, and it’s proven to be a wonderful tool for introducing people to my particular genre of game.

Anyway, Handsome is the next game by them and it’s almost a kind of roll-and write, a game that scales up deftly to any number of players. 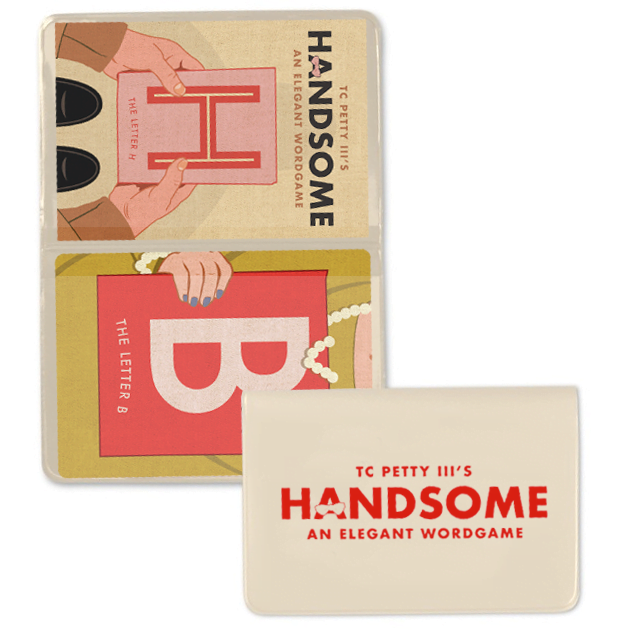 Handsome is a card game where there are community cards, your own cards, and you’re trying to build words out of them. It’s elegant in its scoring and its system – you get as many vowels as you want, but then you have to make as long a words as you can, involving as many of the different suits of letter on the table, and that’s it. That’s the whole cycle. You see who gets the most points, then you can play to more letters or not.

There’s no intense tension about the word play here. You don’t need to do a lot of interconnected play, there’s no board, it’s this tiny little thing, and there’s not a lot of rules to learn. It’s very pure little game, and that’s why I feel like praising it is almost just… y’know. A tweet.

Hey, it’s another Button Shy game. I bought it, because I thought it looked good, and I played it, and it’s great. There, tweet sized greatness. 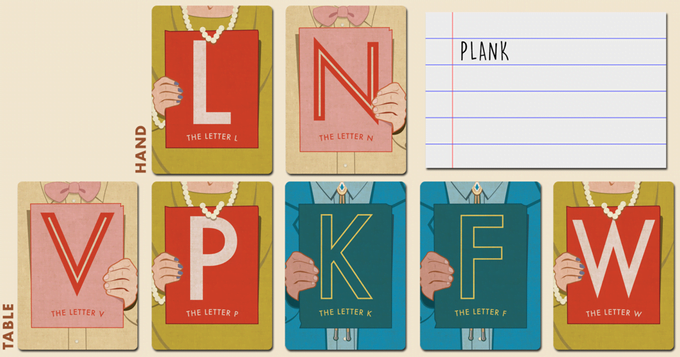 I think a real measure of a game’s quality is how quickly after playing with you, someone goes and gets their own copy. I don’t know about you but I’ve always had a tense relationship with games, with my friends, because even when I’m having fun and enjoying the experience, there’s a part of my brain that’s still the damaged little church kid knowing that they’re putting up with my weird little interest as an act of kindness and the second I’m out of sight, they’ll breathe a long sigh of relief.

I showed this game to my sister on a Saturday.

That monday, she bought the Print-And-Play and was playing it with her class.