I knew going in to this theme that it was going to be difficult, because the nature of games is to not need what stage magic is. Stage magic, at its root, is a way to use a human (which is a fallible piece of meat) to be surprised by the interactions of wholly mundane objects. It’s ridiculous, but when you control the levers and dials of fictional space, actual magic is way, way easier to do than tricks, and generally, is seen as more desirable.

What’s more, because magic – stage magic, of course – is complicated and difficult, you wouldn’t want to use it if you didn’t have to. While I have a love for the craft, I’m not going to pretend I spend my time sitting around doing the extensive practice required for good lifts and card control, or the patter, or the brute-force approach of trying a thousand people until I hit the one susceptible to the trick in a particular way.

I did a lot of digging to try and find videogames about stage magic. I broadened my search for games about stage magic – tabletop and roleplaying and so on and every time, the problem I kept coming back to was that most games would eschew magic (the real skill that’s very hard and involves dorky outfits) for magic (the super awesome thing that’s like lasers but also gets cool outfits and makes for really good videogame mechanics).

And yet, despite all that…

I found some stuff. 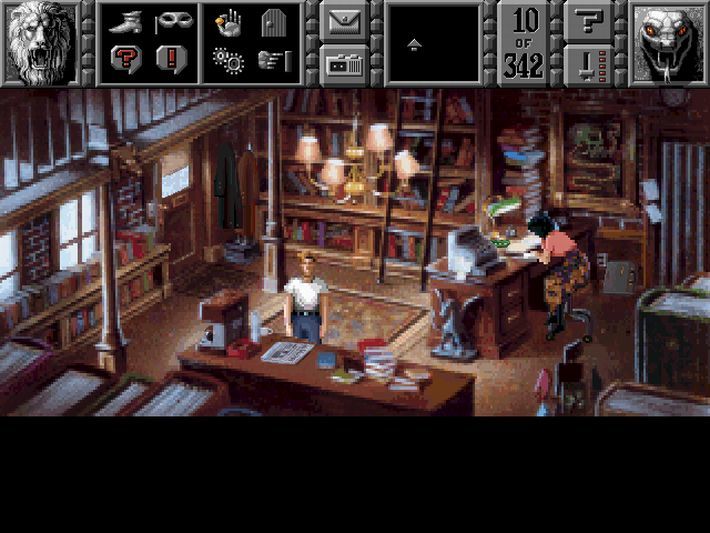 It’s kind of hard to convey the abyss of content here and how little of it I found that fit. And I dug deep. Some stuff wasn’t useful – there are infocom adventures that touch on the edges of stage magic, but they don’t screenshot well, and they don’t really capture what stage magic can do because they all wind up becoming supernatural adventures. There are literally thousands, maybe even millions of different games that feature magic and with my searches I was able to find less than a dozen games that feature meaningful stage magic.

Yet I felt it would be remiss of me, a failure on my part to somehow pass by a chance to talk about one particular person who’s the opposite edge of this venn diagram.

I’ve talked about Jane Jensen indirectly in the past. She was a luminary of the Sierra crew of creators, and lords knows I’ve talked about Sierra. When I talk about Sierra, with its renowned Auteur space, with the franchise games connected to names, I’m sometimes overly inclined to talk about four particular gropings. Roberta Williams, Al Lowe, Scott Murphy and Mark Crowe, and Daryl Gates. Then I’ll sneak in Corey and Lori Ann Cole, because they made my favourite Sierra games, the Quest for Glory series. 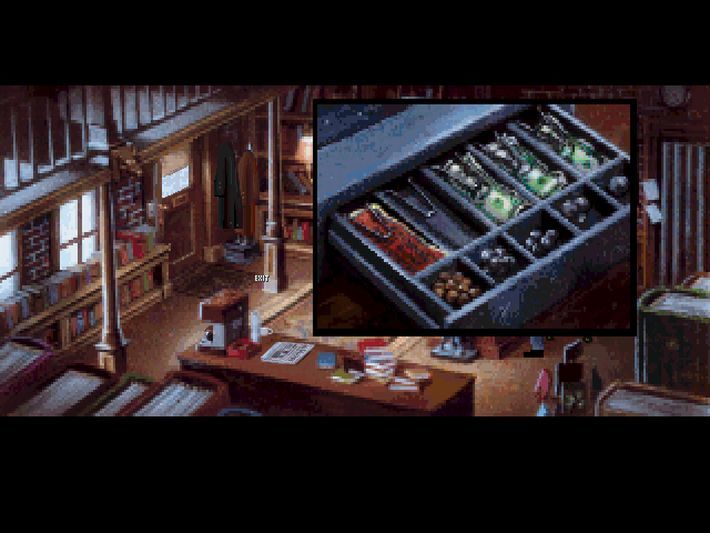 Yet, Jane Jensen is responsible for some of this body of work, too – she was the developer behind Kings Quest 6, Police Quest 3, Eco Quest (which I’ve written about in-depth), a number of titles post-Sierra, and most importantly and pertinently here, the Gabriel Knight franchise. After that, she made some other games which I’d like to talk about but which for reasons that are more annoying than interesting, were not available for purchase in Australia.

Not for censorship reasons, mind you. That would make some sense.

Still, with that lengthy preamble out of the way, here’s your rudimentary summary of the game itself: Gabriel Knight is a narrative adventure game, and it’s of that mid-90s point-and-click, cheesegrater solution style. It also has the dubious honour of being ‘realistic’ by comparison to fairytale works like Kings Quest or comedic like Leisure Suit Larry and that meant that in addition to having a puzzle solving regimen that had to make sense, it had to make a lot of sense in ways that you or I might actually conceive of trying to make them work.

This is a problem I’ve talked about before, which most narrative adventure games circumvented by having protagonists with larger-than-life personalities who are conflict-averse and dim. Bernard Bernoulli is one of the most famous examples,where knocking on doors provokes too much anxiety and he instead has to devise elaborate circumnavigations to overcome challenges you or I would treat as simply as ‘I’m going to open this door.’ In Monkey Island, Guybrush is earnest and a little bit stupid, in Leisure Suit Larry, Larry is horny and a little bit stupid, and so on. Even in Full Throttle, Ben gets to be a little bit stupid, because he’s a mountain of meat and every problem has to be weighted against ‘just kick it to pieces.’ 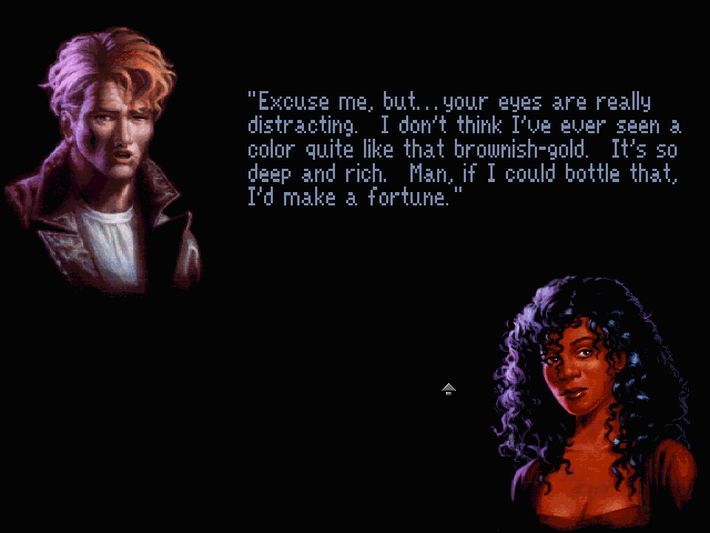 It’s a Gabriel Knight game that gets the most flak these days for the incomprehensible mustache puzzle, which wasn’t Jensen’s work and so on, and that means that Gabriel Knight sometimes gets treated to a rough end of the pineapple. Now, don’t get me wrong, I’m not saying that the game is a lot better than you think: A lot of these puzzles are worse versions of themselves, with everything in these games probably being able to be done at least a little bit better with a bit more support. Jensen was given full developer status at Sierra when the engines were getting shorter-lived, development costs were getting higher and the videogame landscape was getting a bit shootier.

Still, Gabriel Knight, the character, was our crux of feedback, and this is where we learn about the magic. Because magic is about expectations, and disruptions to those expectations. When you HAND the GUN and then GUN the GUARD, there’s an expectation of what should happen, and whatever reaction your agent – Gabriel – gives you tells you about the world. This means that the devs need to work out what you might mean with every possible item being presented to every other possible item, why you might want to make them interact, then give you feedback on why what you thought of was a bad idea, which ran into the additional problem of the game trying to work out what you were thinking.

It’s a real bad scene, making a narrative adventure like this without a clear character to filter things through, and Gabriel Knight manages to almost-perfectly land on two basic ideas; One, Gabriel is destined (spoilers I guess). Two, Gabriel is a complete fuck-up.

This is the great idea at the root of Jane Jensen’s Gabriel Knight series, and this game in particular, which I don’t want to go into too deep because, amongst other reasons, I haven’t finished it yet, and I haven’t finished the remake either. But regularly the game goes out of its way to underscore to you that even though Gabriel is important to this story, even though he’s going to do amazing things in this creepy, horrifying world of blood and treachery, he’s still the kind of person who can have bed-head at 6pm and needs help thinking his way around a goat (and yes, that puzzle isn’t in Sins of the Fathers). 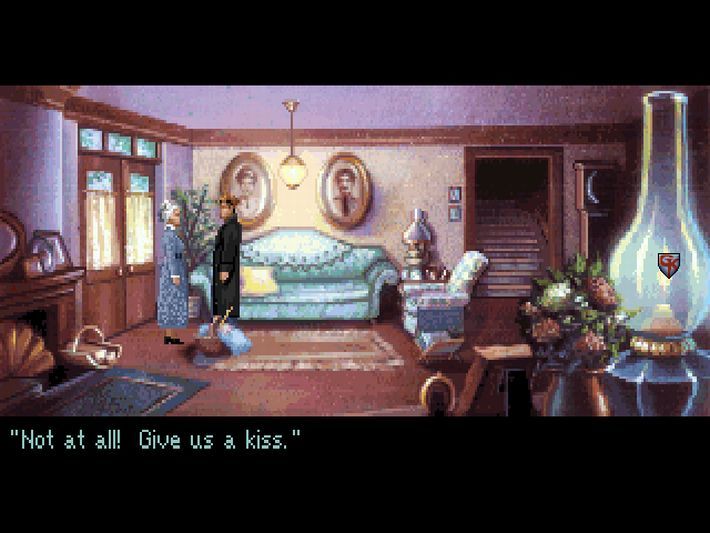 The destiny angle, well, whatever, that’s just the kind of world-building Jensen loves. It’s about being descended from old European ideas, and when you dig into her work in general, she’s an author who revels in opportunities to construct from mythology. It’s like how the backgrounds in games she’s made, while yes, typical Sierra painted fare (and therefore lovely), were also the kind of things you would pick if you wanted to make a background artist draw lovely landscapes or brooding old cities.

The magic, however, that’s what pulled me here. That’s what I remembered, and what made me contemplate this strange game by this wonderful creator in this narrow niche of the narrative adventure.

In Gabriel Knight, magic is real. It’s magic of cults and chanting and voodoo (cringe). It’s magic of, interestingly, practice, practice across centuries, practice so slow and difficult that a lesbian fire ghost (don’t ask) tortures a family for centuries but nobody can share the story meaningfully because even the idea of it being true is fanciful. Over the course of this game, magic goes from being silly in the establishing shot (in book store), to dismissed (as a ridiculous component of the mystery) to more serious than life and death (literally).

And that arc, that ‘no, maybe, yes’ arc, as basic as it is, is filtered through Gabriel, who believes it, a device. It’s frightening and it’s other.

I wouldn’t recommend this game per se, it’s still very much a Narrative Adventure of its time, even the remake. But it is one of the only games I know which talks about a pile of dismembered dongers being dumped on a doorstep.