When I talked about Century: Golem last year, I referred to mastery depth, where the way that experience playing a game makes you better at playing the game – and that meant that for some types of game, playing with new players was an experience of watching them lose because they hadn’t yet learned to play at your level of mastery.

I also talked about how much I wanted to have more cooperative games, and how I also need some games that are kid-approachable for my niblings to play, because games without winners and losers are important for managing times when everyone is all a bit stressed and it’s a bit much.

Forbidden Island was a late addition to my collection last year, and I think it’s worth bringing up as an excellent game for a game collection, even if the game itself isn’t that big a deal,  especially if your collection has games that maybe, to you, look a bit ‘better.’ 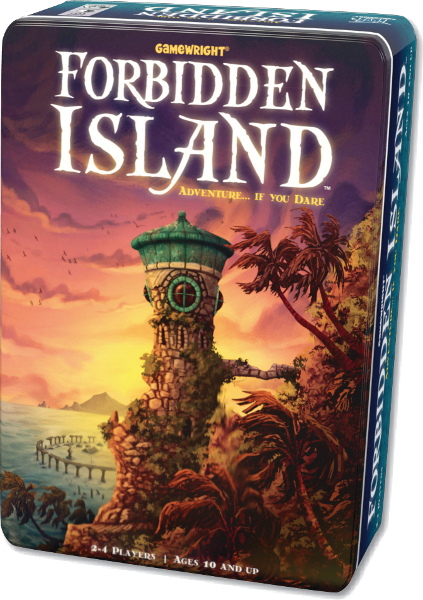 Forbidden Island is a tile-based cooperative board game by Matt Leacock, who also developed the theme-rich cooperative darling Pandemic. You’re going to an island, which is starting to sink, and trying to retrieve the last of the relics of the people who lived there, before it sinks. It uses a deck of cards to represent when tiles sink under the water, and the clues you’re looking for to find the various treasures. To do this, you play one of five explorers with a single differntiating ability, and you move around, exploring the island and trying to keep bits of it from sinking while you learn the clues that can get you the treasures.

If you’ve played Pandemic, you’ve played a more interesting, more diverse version of Forbidden Island with a more complex theme, but that may not be what you want. One of the mechanics in this game (and Pandemic) that you might be familiar with is the way that the game periodically asks you to shuffle all the affected tile cards up at once, and put them on top of the deck, meaning that the places you may have just fixed are suddenly in need of fixing.

This is a great mechanic – you may have heard me use the phrase Four Fires, Three Buckets, and the way Forbidden Island‘s mechanics work, you start out with two fires and three buckets, but then you start to get more and more fires, and you never get another bucket. What then happens is that your island starts to shrink, problem areas get more likely to get worse, the deck shrinks so you have less and less time. It’s a great mechanic, just an elegant little math puzzle that changes the priority of the game over time, without involving complex pieces. 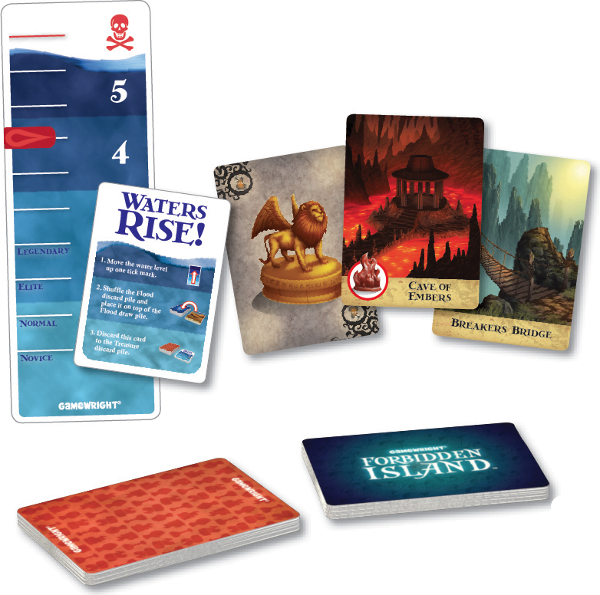 Still, even if this game is a thoughtful puzzle, it doesn’t necessarily follow that it’s a great game. Forbidden Island isn’t, definitely not the end-point for cooperative tabletop games. But what it is, what it’s valuable as, is a starter cooperative game, a game that you should definitely have on hand for you to play rarely, when you want to introduce someone to the type of cooperative game, or when you want something that you can’t or won’t get heavily invested in. The lack of mastery depth works in its favour in this way: While there’s a virtue to the game keeping new and old players on a relatively even level, it also means that once you’ve played this game enough to be confident with it, it isn’t really going to surprise you.

It also has the enduring problem of this type of cooperative game, which I’ve talked about in the past, called quarterbacking. Quarterbacking is the phenomenon where due to the game being about managing public information to optimally execute on a shared goal, it is possible for one player to navigate an actual optimal path through the game and for them to not be fundamentally wrong to share this plan with other players. This can mean that there are situations where the play of the game devolves into one player bossing around all the others, and that sucks.

It’s not that this is a fundamental sin – after all, a solution to ‘one player is a domineering asshole’ is to stop playing with the domineering asshole until they learn how to share play, but the game design isn’t doing anything to slow that pattern from emerging, or to stymie the would-be optimiser the way that other games can with things like randomised hands or hidden information or your personal engine. Hero Realms may be a better game for cooperative play because everyone’s getting to do something exciting and interesting and personally engaging, but the thing is, you need to be able to play Hero Realms solo at that point.

I’m not going to pretend Forbidden Island is a perfect game for me. It’s very much a system, iterated out to the limits of its space. For a game where you select roles at the start, it’s dreadful at projecting personality, and winning or losing the game from playthrough to playthrough is mostly about rolling some dice rather than correctly playing in a perfect situation.

I don’t often talk about buying games to be part of a collection. Especially when it comes to videogames, I used to try and focus on terms of what game could be the most fun to keep playing when you didn’t have a lot of money to spend. To think in terms of your ‘collection’ is to think in terms of physical objects you have for a purpose; games that you feel deserve some sort of reward or accolade for being good.

If you’re collecting, and if you’re sharing, and if you want games that you can play with people who might not think they’re interested in games, then Forbidden Island is an excellent little game that doesn’t shut people out while they’re learning.