Oh hey, it’s Talen a PC gamer who didn’t have a console through the 90s talking about a classic of the form in a genre he’s normally pretty condescending towards and it’s an iconic masterwork of the genre so there’s a checklist of things you kind of have to talk about on the way through before you get to talk about whatever it is you want to talk about well guess that means we gotta blaze through the outline.

With that list of the key and important details that are necessary to cover I have hopefully cut down a chunk of the mandatory word count for this article. After all, where will we be if I treat Final Fantasy 6 as something that you may already know about, or as some subject that you already probably can find other sources to explain?

I intend to spoil things about this game but I don’t imagine I actually will? Like, you may view it as a spoiler to mention ‘there’s a character named Effuzio in the story’ and that’s fine, but I don’t particularly plan on talking about the main thrust of the plot. Besides, if it helps you at all, the story of Final Fantasy 6 isn’t really that important, or even that interesting. Not the single, big, core narrative that runs from instigating incident to attention arrival to conclusion to denoument, no, that isn’t important. What’s important to me is the sequences of smaller stories that make up the whole of experience of this multi-hour JRPG mammoth of a story, the characters that are Final Fantasy VI.

There’s something to be said for just how interestingly Final Fantasy VI is structured. It’s something telling that I can’t really tell you all the things that happen in the game, but if I want to try, what I have to do is mentally run through a list of things that happen, like I’m remembering the third line of a song lyric that I definitely know but can’t pull out of memory on command. There’s this sequence, as well, of drawing in, together, then splitting up again.

One of the effects of this is that it puts these characters in these paths that mix up your gameplay options – so you can’t just go ‘well, I don’t know how to use Sabin, eff it, I’m going to lean hard on Cyan and Terra,’  because boom, sorry, this little trio needs to get things done with just Cyan and Sabin and okay you can have a Shadow, as a treat.

This make-break cycle also means that there’s often these status quos a you can enjoy, that the game then keeps knocking you out of, with the promise that your next quest, the next hill, the next problem you solve will bring all those characters back together and you can get back to that gameplay experience you like. And that quest, that need to get to that point seems perfectly tuned to make it juuuust the right kind of hard that you wind up exploring the characters you have in an attempt to make the path forward easier. I don’t know if this applied for everyone else – it seems that most people I deal with are bored with the ‘difficulty’ of these games and are all galactic space brains who know every in and out of the game – but for me, these sequencings of breakups had a really profound affect on getting to know how characters worked, and when I had to bite the bullet and use someone I didn’t like.

That’s one of the wildest things about this game, really. Every character has a distinct, unique mechanic, and they all serve a different purpose. And it’s done with menu based combat, with the menus eventually all coming in together to an almost-identical form. That means every character can express their difference in terms of basically one active button, and that button gets to do some weird stuff. Like, one character has this thing that literally lets you spend time to improve your damage, another allows for fight game inputs, and another of them has…

In most Fantasies of Final to this point, you could mess with monsters, but it was usually done by a hero type known as a beastmaster, some kind of magician, trained and using a bell or a whip or something like that. Magic was important to the beastmaster, it was shown as this like, craft of expertise. In Final Fantasy VI, it was done by Gau, and Gau was a little kid. Like, not Anime-Young, he’s like… ten. He grew up in the wilds, on a place called the veldt, and there’s where you find the monsters that he can copy.

I didn’t use him, when I played the game. I had no idea how. Still, I felt embarrassed by that, like I was letting the little kid down. There was something compelling to me, as a kid who wasn’t that far from his age, to the character of Gau. Not the mystery of who this kid was, but that this little kid ran around playing lets pretend with monsters, and he believed it hard enough and well enough that it worked. 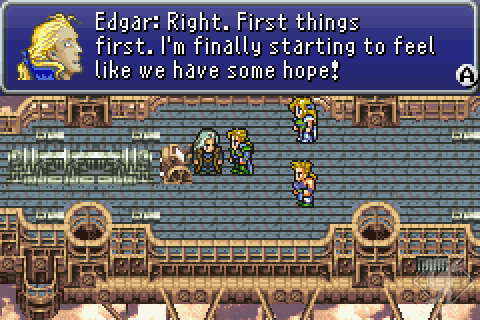 Anyway, Celes is another character that stands out in my mind? And it’s kind of dumb when I think back on it, too, because Celes was a character that the game literally funnels you towards sympathetically engaging with. Like, you witness her being heroic then you see her being abused by the evil baddies that are against you then she signs up to be with you. Of course I, a child, was going to develop some kind of romantic attachment or at least something like that, but pointing out the obvious of how it happened doesn’t do anything to diminish that, yeah, it absolutely happened.

I still don’t know how to use Celes’ abilities well in game, but I did use her in almost every situation I could. Because she was along for a lot of things, I got used to using her and equipping her, and that meant that all the time, Celes was one of the best characters in the roster, and all while I completely failed to know or appreciate what Celes could do.

Imagine that, imagine being so into a Final Fantasy you couldn’t just accept the text as the text and you kept needing more and more, like a sort of all-consuming maw that wants spinoffs and extra chapters.

I think someone’s mad at me now. Anyway.

I remember as a kid thinking Shadow was the shit. He was like, a ninja, and a mercenary, and he wore black and he, uh

You know I was very easily impressed as a child, in hindsight. I didn’t even know if him having a wolf (Interceptor is probably a dog, but I probably thought he was a wolf, back then, in my headcanons or whatever) was a big deal for me. I mean, I hadn’t had a dog at that point in my life as a like, person who could consciously construct a memory of ‘who I am.’

But yeah, I thought that Shadow was rad as hell. He was part of Team Train Suplex, with Cyan and Sabin, and he was the taciturn, closed-lipped ninja that tapped into a really juvenile appreciation I had for things that seemed ninja. He had that Snake Eyes quality, that Turtle Se Quois. And he had a secret, that the game made no effort to actually conceal to you. Eventually, if you chased things down, which I kind of did without realising it, you get most but not all of the story. The only final point you can get is that both Relm and Shadow can wear an otherwise unique relic that Relm implies came from her mother.

See, Shadow is her dad.

When I worked that out (or was told it on the Chee Database or over on #Animorphs on IRC, because I was not a clever boy), I was blown away. My goodness, look at this detail, look at how interesting that is, those characters are cool, and it made me like Relm a lot (I had been ignoring her because she didn’t do any good damage with swords). And like, this is a really great example of a game mechanic presenting a beloved narrative. That’s really cool!

Here’s the wildest thing though. At the time, I figured Shadow was, well, an Adult. Generically, An Adult. He was like, eighteen, and I was … what, fifteen? Maybe? That was basically an adult. I never put together in my head that Shadow had to be, you know, an adult. Like, Relm’s Age Plus Some Change. And now I’m looking at being Shadow’s age, and suddenly that dynamic, of seeing Shadow after the end of the story rebuilding with Relm, and finding that entire story space something I really want to see.

I know how the game is implied to end, I don’t much care.

I didn’t replay the game to write this article. I mean, I’d like to – it’s a great game. The screencaps all come from Caves Of Narshe, which is why I left the watermark in and didn’t mess with things. Going back and replaying it, I’d probably want to uh, find a GBA, which is around $80, and buy a copy of the cart, which is usually around $60. There may be some much more cost effective way to do that, but who knows, who could know, it’s mysterious.

The thing is, I didn’t want to replay Final Fantasy VI. Not for this article. Not for sitting down and thinking to myself: Hey, what about this game has lasted. What is there, in this game, that actually meaningfully resonated with me? What do I know now, now the last time I played the game wasn’t, like, a week ago?

Such a corker of a game.