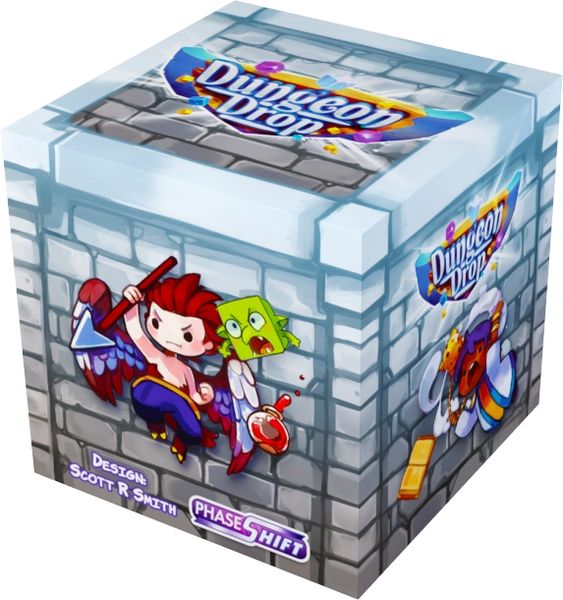 Dungeon Drop is a competitive board game where you randomly generate the ‘dungeon’ by dropping cubes from a box onto the field. Then, you survey what you’ve got scattered in front of you and construct a space of them, gathering up all the jewels and gold in that space, the magic potions and shields and tricks and traps you need, beat up the monsters that are there and all that good stuff, then it’s someone else’s turn and they complicate the dungeon more by hucking more cubes at it.

It’s got most of the trappings of a dungeon delver game; characters have a race and a class, and they’re mostly pretty classic stuff, with a dash of reflavouring for the particular aesthetic choice of being a dungeon you literally drop into.

Okay, that’s the theme, but the game play in essence is like a really interesting variety of dice roller. You’re still having that anticipation of grabbing a fistful of cubes, hucking them and then seeing how they land, but instead of caring about the faces, you care about their positions.  Playwise, it’s pretty great, though it is very fast and you might find yourself realising what you’re mostly doing is scattering some pieces, then deciding what chunk of those pieces to take for yourself, and passing the turn.

One of the weirdest things about this game is that for all that the theme definitely lives in that space of ‘generic theme,’ it’s actually a theme that’s quietly doing a lot of heavy lifting.

When you pick this game up there are basically four or five different scoring systems for your cards going all at once. The mechanisms of the game, when you look at them are all pretty simple, but also different enough that it’s easy to confuse them. Play the game without the theme and you have some scoring cubes that have varied return, some that have a standard return, some that have a return based on hidden information, some that can exclude you from scoring other, nearby cubes unless you have a high enough personal threshold, some that can’t be scored without increasing that threshold and some that are just there to define scoring zones.

You could remake this game as gardening and flowers or dance hall steps or all sorts of other possible things, but thanks to the existing metaphor of ‘adventurers go into dungeons and do quests,’ all the heavy lifting of explaining why some systems work one way and why some work another way is handled for you, off on its own. It’s one of the elements of game design that’s sometimes a little easily missed – your theme primes the intuition of the players, making it easier for them to grasp what things are meant to do. If a card improves your engagement power by 2 points, that’s one thing to parse, but if the card gives you +2 attack and it’s called a sword, everything makes a lot more sense a lot more easily. 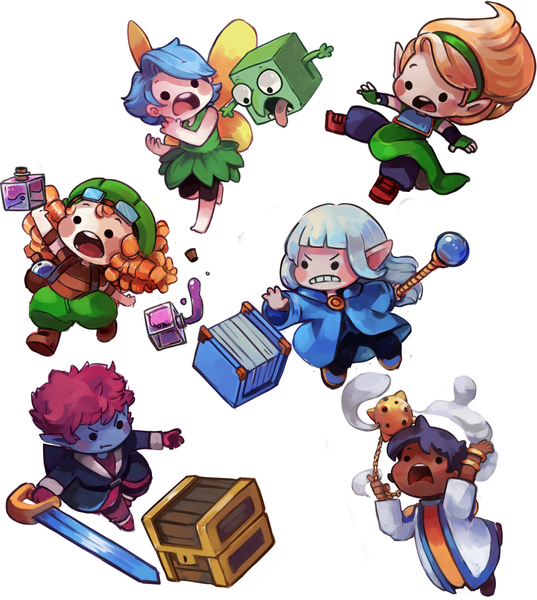 It is ultimately a board game with a lot of implicit demands to make its play area work. You need a lot of physical space. A big tray is not a bad idea if you want to make the space this game takes up manageable, and maybe some standard size object to use as a height reference. The game requires you to be able to get up and move around it, too, which is a limitation that, for example, makes this a bad game for a lot of folks in wheelchairs. There are ways around this, but they’re solutions you bring to the table.

Are these damning reasons to avoid this game? No, not at all! But they are worth bearing in mind. This lovely game that doesn’t ask you to do a ton of reading or manage a lot of complex rules is going to be trickier for some people to play. Access is not universal.

I was not expecting to like this game at all, but it was being kickstarted for something like twenty-five dollars, and it looked cute. I backed it, then promptly forgot about it. Apparently it did really well on kickstarter. I don’t tend to like following kickstarter aggressively, because that tends to make me impatient and annoyed and anxious. Treat kickstarter as a bit of a lucky dip, a sometimes surprise that you back maybe once a month and ignore for a year.

What that means is that my normal valuation of this game is kind of at odds with what it may cost  you in stores. If it’s twenty bucks, or thirty bucks? Probably fine!