Gosh, hasn’t the visual novel been brought up a bunch of late?

It seems like only yesterday we had Dream Daddy getting conversations going about religious abuse, trans bodies, fatness in media, and gay dudes who knife-fight going. There was the Kentucky Fried Chicken Visual Novel that produced an eruption of conversation about ironically engaging with marketing and the way that our landscape of critics and reviewers is still ultimately a wing of advertising. Steam banned a Visual Novel (good) this year, there’s been a whole range of talk about where and how to get and market them, and all the while, the Visual Novel as a genre has just trucked on while discourse happened.

These past few years have basically not gone more than a month or two where someone in a position to pay writers has had their money return an article about The Visual Novel and the impact this one’s having or what this means.

The Visual Novel is even a weird phrase because just describing it, I know I’ve written about the way that the format can describe both a kind of game and a kind of amateurishly-constructed video. I’ve also compared them to mazes, where one of the most basic kinds of game challenges is made engaging by making the passages you travel down more interesting for their own sake than just the idea of ‘beating’ the maze. They’re mazes and they’re puzzles and they’re management games and they’re kinetic novels and they’re all these things.

But they’re also, definitely a thing called a visual novel, and we know what a Visual Novel is.

Spoiler And Content Warning: I talk about Doki Doki Literature Club; there’s a discussion of self-harm and suicide, and I’m pretty open about admitting I think the game is shit. You can just skip on if you don’t wanna see all that. 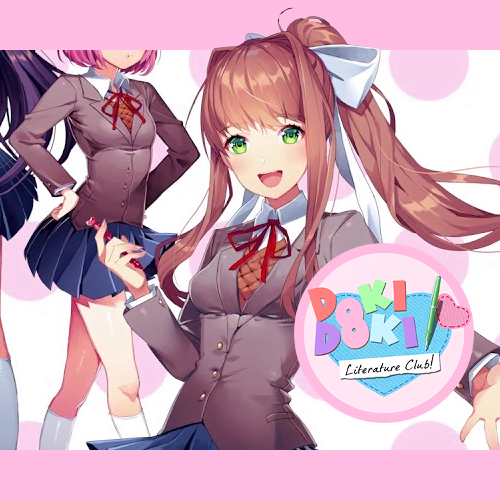 There’s an idea I’ve talked about in the context of Ouran High School Hosts Club, Baudrillard’s simulacrum. Simplifying a lot, the idea is that the simulacrum is the image that dictates the object, rather than vice versa. Baudrillard warned of a world in which the way things were assumed to be was more important than they way they actually were.

This is something we see a lot in examinations of genre fiction (and indeed, is core to how Ouran works). The genre serves as a sort of scaffold, an idea space that sets out certain rules – a smouldering heiress, a heroic rogue, a scheming vizier (wow that got racist suddenly) and so on, but if you have all those bits, you can easily funnel the story into the spaces the genre serves. This means that you can examine genre using genre, because the genre is so durable that it will work just fine even if you point out how none of it should be working in one or another diegesis.

Genre media gets to work this way with these big, semi-seriously constructed trope structures, and that makes them very predictable, and that also makes them very interactable. You can in fact compose a list of your top 10 Tsunderes and have that descriptor make some damn sense, because Tsundere is a thing that exists and many works identifiably draw on that idea for their own work.

The idea of the simulacrum is also present in fandom spaces, where people become very much enamoured with the way things work that they’re pretty sure of. Sometimes this can work really effectively – a lot of shipping media gets to sort of leapfrog over missing chunks of media or character development because everyone ‘knows’ that whatever the story says it’s about, it’s not as important as getting these two boys to fuck. Sometimes it works directly against it – Magic: The Gathering players are infamously bad at evaluating new cards, because we tend to filter the information of how a deck or card works through what we already assume to be true, and that existing scaffolding makes us anticipate play that doesn’t happen.

What, though, about the simulacra of things you hate? 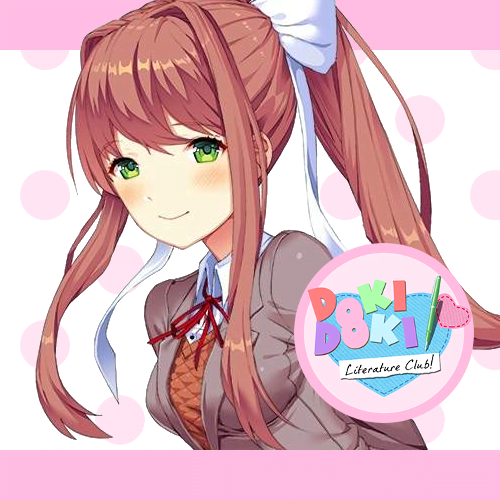 There is a real challenge I have found these days in talking about critical darlings I hate. My Bloodborne conversation was as much about being deferential to a game I thought was pretty good but also deeply flawed as it was trying to punch the monomanic critical landscape right in its face. I wrote about Kingdom Hearts earlier this month, which I’m pretty sure I will always regard as really silly but still did so with deference because I feel people would actually get seriously hurt, anxious or upset to hear me state as simply ‘this story is rubbish and the people who made it don’t deserve praise.’ In fandom, that’s not an attack on the work, that’s an attack on people who have invested their emotional energy in believing the exact opposite.

There’s also positioning? Because being The Guy Who Hates Things That Sucks is seen as a really negative thing. There’s a whole internet outrage industry of shitheads who don’t know anything about a topic spouting effusively for an audience of miserable shitheads about how the Ghostbusters movie cast photo is a sign of creative parasitism on a movie that had a ghost blowjob. Regularly, popular people I dislike because of my reaction to their work show themselves to be assholes, and I’m left watching their fans recover, knowing that now is absolutely not the time to say ‘well I always thought that wrestling isn’t wrestling video was full of shit.’

Standing outside the fandom and telling people how the thing they like sucks seems like such a shithead move.

What’s more, I try to keep my opinions on this blog pretty well thought out, and it doesn’t matter how many layers of analysis or critical regard I put around it, ‘I hated this’ is always going to be seen as an unreasoned position. The fact that the high camp and superficial beauty of Final Fantasy games doesn’t appeal to me enough to make me discard the way they make me feel miserable about myself as a person is seen as my failing for not being able to love the thing enough.

It’s hard to talk about things I hate because I think that people for the most part don’t ever see serious dislike of something as meaningful, or serious, or adult, or thought out. The idea is that if I hate something I just hate it because X or Y. My hatred of things like She-Ra and Undertale has to be carefully contained for fear it might impact the wrong people, and that has this really twisted effect on me as a critic. I can’t express my sincere, negative feelings, not because of how they affect me but because there are other people who can’t handle me being mean to a videogame.

That is, I am aware there are people who are more bothered by the idea that I will be mean to a videogame than they would be bothered by being mean to me. 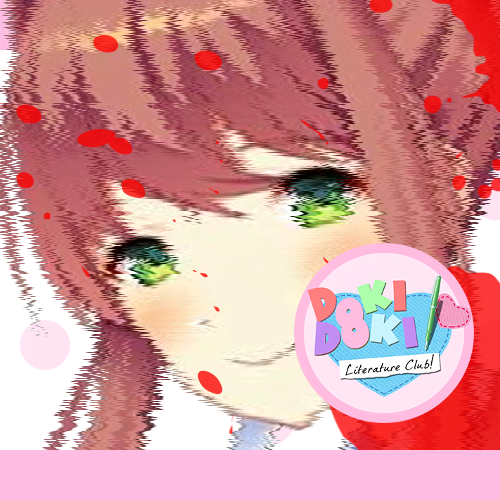 Okay, so a thousand words in, Doki Doki Literature Club.

The sheer volume of opinion about this game in the hot window of time where it was a thing is embarrassing. Oo, it’s got a content warning. Oo, talking about the content warning is a spoiler. Oo, spoilers are bad. But now I’ve told you there are spoilers so you won’t go in properly ready to be surprised by the game with the ridiculously menacing poetry in the first act! It talks to streamers!

Yes, I am aware that my computer is a set of connected devices and all that information is available for the computer to interrogate. Very well done, I’m very impressed. Will you fuck with my save files next? Oh yes you will oh my goodness, well isn’t this special. And one of the girls is messing with things! You see, it’s, it’s juxtaposition, because you see, you came here for a nice time, for, for a visual novel about cute girls who like books and now you’re an emotional support therapy case for a homocidal made-up girl who’s mad at you for playing this game like it’s a game! See? See, you you thought there would be a nice thing – cute girls! – and then, then we hanged one of them and you got to see it, isn’t that impressively shocking.

It’s not like it’s bad. I mean, it’s a perfectly acceptable example of what it’s doing. It’s not even fair to say it’s a visual novel but. It’s just a visual novel. It’s a type of visual novel we have so many of. It’s a type of game that we’ve had for longer than most of the audience have been alive. It’s just a story that plays with an unreliable narrator! There have been games that fuck with the files on your computer for years. ‘What if everything you’ve believed to engage with this story was wrong’ is such an old twist that it’s in the fucking Bible!

But what I saw, when I saw people gasping and stunned by the idea of a Visual Novel With A Horror Twist where the cute girls get hurt, was that I realised I was looking at a critical landscape that had no fucking clue what Visual Novels were actually doing already. And that’s the thing about this game that pushes it from merely being another entry into a space and into my own little personal space of sharpened axes.

Doki Doki Literature Club needs you to know what Visual Novels are, but it needs you to have played as few of them as possible. It relies on what a person who doesn’t know would be pretty sure what would be in a visual novel, so they can be shocked when self harm and suicide come up. It needs you to assume it is toothless so it can bite you with its one tooth, and if you’ve ever dealt with any visual novels or even, you know, books, you aren’t necessarily going to assume that a story with cute girls on it is in fact, not about cute girls.

It wants to play with your simulacra. 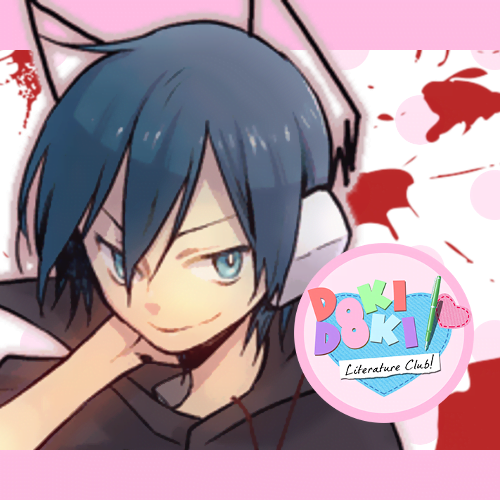 It isn’t even bad.