Little by little, I’ve been working through the Commander Keen franchise, the PC Platformer that started out with a mathematical space-folding nonsense of a smooth-scrolling EGA platform game, and moved on to just being The Way The Lights Stayed On for many months at id software.

This game is nearing on being 30 years old, coming out in December of 1991 as shareware. Keen 4 was the chapter almost everyone got to play, because it was free to share, because, like I said, shareware. It also was brightly coloured, had vibrant music if you had an adlib or soundblaster, and it didn’t feature lots of blood or guts, the way that videogames were parodied as being at the time. You weren’t shooting things with a laser gun that killed them (any more).

Basically, Commander Keen 4 was popular and well-distributed. That normally is enough to make a game a nostalgic classic, because videogames of the 90s were in many cases there to be something you reused until you absolutely had wrung everything out of it. In the case of Commander Keen 4, though, it’s a merciful coincidence that the game is also really quite good.

At its heart, the game is a treasure hunt, like Commander Keen 1 and 2. You arrive in a top-down world where you move around between a bunch of little places of interest, and these are levels. These locations of interest can bar your way to progressing to other locations, and there are other locations that are further barred by less obvious means. For example, there are some islands you can’t get to at first, and there’s no obvious adjacent level to beat to work out a way to progress. There are only eight levels you ‘need’ to finish, where you can find the eight Gnostic mystics that will be able to divine your needed information and win the game. 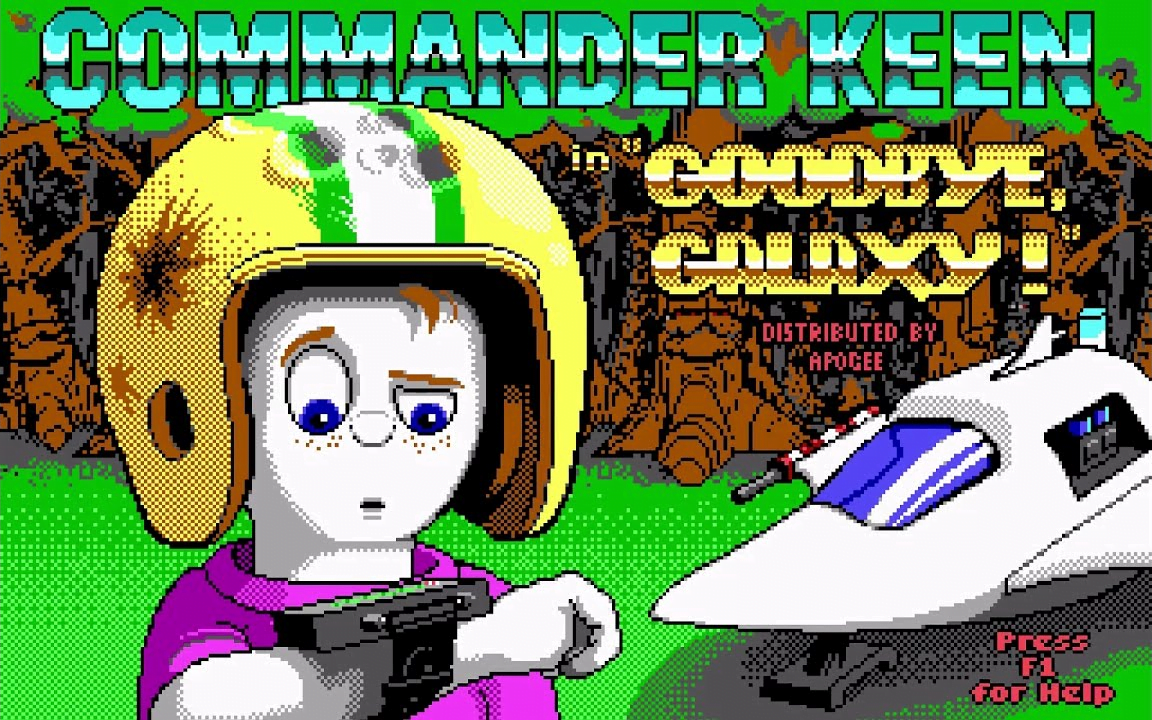 An interesting question is what are these places? If you look around the environments of Gnosticus IV, you’ll find that a lot of these places are designed to reflect a space people don’t necessarily live but where they do go. Locations like Slug Village, Border Village, Hillville and even the Perilous Pit are all clearly places people live, as you can tell  by the number of doors and lodgings, even if they’re not exactly fleshed out with beds and the like. They’re all village-shaped, with a sort of villagey-ness to them. There are large forts, like Sand Yego and probably Crystalus, places that have some purposethat implies a construction, and there are pyramids, which imply mysteries and hidden knowledge with things like runic iconography.

This is of course, a byproduct of tilesets and the limited colour palette of VGA graphics. Oh, you could put 256 colours on the screen, but loading them and moving them around made scrolling less excellent, so if you made everything out of standardised tiles that you can bolt together, you get things to load faster. This is why very few levels have any unique visual elements – oh, they’re sometimes elements from another level, but aside from Miragia, most levels look like a unique combination of elements rather than a unique element. Which is also pretty cool, small numbers of parts used well.

Goodbye Galaxy is a mid-point game; it’s in a way, the kind of story you’d see as 2 of a trilogy, rather than the start of one (though, it and its sequel were conceived as a pair, not a trilogy). It’s because what you’re doing, the thing you’re after, primarily, is information. Billy is trying to rescue eight grumpy old men who can commune with a really powerful artifact (in a funny way) and get information Billy needs about how to stop the Shikadi.

If you look at videogames of this period, the typical end of any given game is killing something. The plots of these games may sometimes have made that end goal – a boss monster – something that may have impeded information, or may, like in games like Bio Menace, reveal to you that hey, actually there’s something else you didn’t know about, now. Now, I’m not getting all functional determinist here, I’m not trying to argue that because videogames express violence that’s all their good for, because it’s kinda dumb?

But the premise of Goodbye Galaxy isn’t that you’re finding an artifact broken into pieces, or build a weapon, or awaken some evil you can kill, but instead you’re trying to find people, who can explain something to you. There’s something to be said about the instrument the game is shaping, and what matters to Billy.

There’s something weirdly sweet in all that, too: Billy is trying to learn something, and as much as it can be metaphorised, all of this game is about that quest for discovery. Oh, sure, he still gets through it with a stun gun, but there’s questions you have to answer on the way to building that collection of eight elders.

There’s something weird about this because we often see the question of ‘middle’ stories in trilogies as being hard to do. In Goodbye Galaxy, they don’t bother introducing or explaining the story (which they could do as their own thing), but if they had done a story introducing the conflict, then Goodbye Galaxy would be a nearly perfect example of a middle story. You know there’s a problem, you don’t know how to solve it, and you look for a solution that makes a game mechanical demand out of finding not the solution, but finding out how to find it out.

Anyway, what I’m saying is Commander Keen 5 is the real Half Life 2: Episode 3.