First up, if you like light economic euro-style games, where nobody is actually trying to attack one another, and where the goal you’re building towards is just something nice and wholesome, I wholeheartedly recommend Century: Golem Edition.

It’s a great game, particularly because it doesn’t have tons of mastery depth to it; you’re not going to have an advantage over the player who plays it three times when you’ve played it twenty times. Everything you can do in this game, you learn how to do in the first turn, and after that, it’s just a matter of reacting well to what’s happening in front of you.

Players getting ahead put themselves behind, and even the last card flipped can change the fate of the game without feeling unearned. It is a game so quick that you’re rarely left waiting for your turn, but it’s still a game where it’s worth having a think about what you want to do.

It is also beautiful for its mechanics, and its base assumptions. 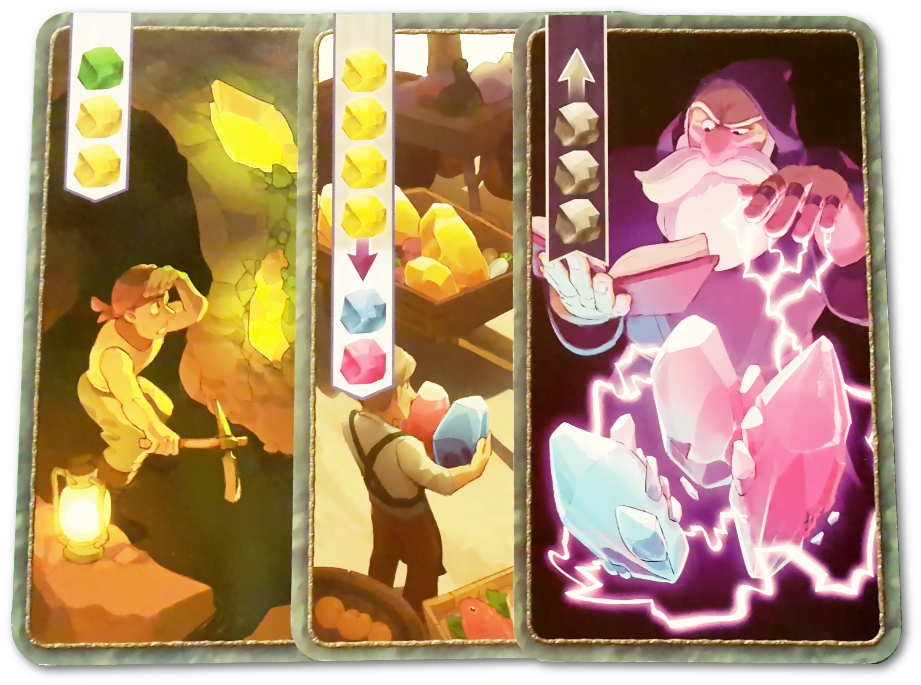 I’ve talked about scope in games in the past, where what your game is about and what your game represents playing against how many and how much mechanical space you have to play with. When making games, it’s important to recognise just how much game there is in anything; Poker is played with 52 cards, but designing each card was just a matter of building off a base set of values. Yet in this, you have a tense, thoughtful game with long, extremely high-stakes moments of waiting as players try to work out what the other people are trying to do based on what they have available to them, based on what the game could have become.

There are four game actions you can take in Century: Golem, and these three cards show you all but one of them. The only information that’s mandatory is the top left: it shows you acquiring crystals, upgrading crystals, or trading crystals. That is it, that’s your whole suite of game actions. You choose how to value the cards based on how much you’re willing to give up to get them, and other players’ actions add value to the cards. The fourth action? Pick up all your cards so you can play them out again.

It’s so clever, it’s so tight. This game runs on four game actions, a currency and a commodity and everything else from there is just player behaviour emerging. There’s room, I suppose, for more cards, for expansion cards, but I don’t want them. This game is a game I want people to play so they can learn from it for how only a small number of emergent rules can create an emergent experience. 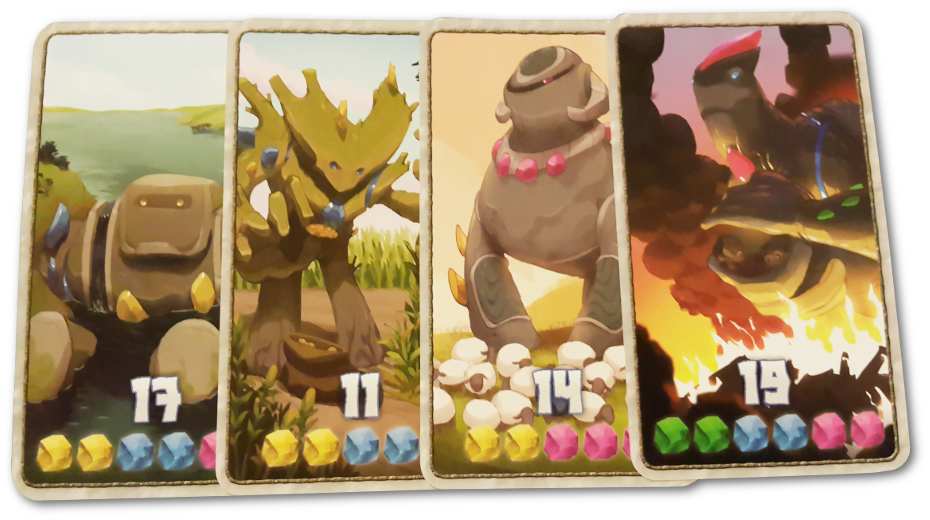 The other thing I love about Century: Golem is that it’s an economic game that doesn’t represent – okay, hold on here, we’re going to have to tear the bandaid off a word here, but neoliberalism as a natural good. If you’re not familiar with that idea, here’s the simplest summary: Neoliberalism is a vision of markets as inevitable goods unto themselves, and therefore things that exist to serve the market can’t be bad. Neoliberalism is the kind of economic mindset that thinks military expansionism is good, if it’s For The Market’s Sake.

Lots of economic games are like this, with a sort of modern view of the game space where there are no bad consequences for your economic actions, there are no displaced people and disgruntled anarchists in Monopoly and for the most part, the system in the game executes its own sort of metaphysical trick. There’s a lot of interesting things to talk about here, with the way that even stories about bad kings make you think kings are a bit okay, and if you want to read more you can check out Gaming the Stage by Gina Bloom.

A good way to look at these things in most economic games is what you’re buying. What does victory look like? In Monopoly, victory is about owning property. You advance property by building hotels on it. The state of succeeding in Monopoly is about being a landlord of the most transient property.

In Century: Golem, you are trying to activate golems to help out in your community – and those golems are all shown, in the cards, doing things for that community. Some are very silly – there’s an ice cream golem, and a saxaphone golem – but for the most part, these golems are shown not to be engines of war or enforcing the status quo, but things that make the lives of the people in your community better. They are enriching. They are gentle. They are sweet – and they are helpful.

Century: Golem isn’t some sort of perfect anarchosyndicalist work. It’s an economic game of trading some crystals for some other crystals. But it’s done in a way that this is a rare exmaple of an economic game that isn’t made to reek of capitalist violence. The art shows people in trades getting things they want rather than anyone being coerced.

I like this game a lot and I hope you have a chance to check it out and get it onto the table. It’s beautiful and charming.