Carrion is a 2020 exploration platformer made by Phobia Game studios, published by Devolver Digital, and landed on the steam store square in the middle of the pandemic shutdown while people felt frustrated and scared and extremely into the idea of a game that let them thrash around helplessly while trying to escape containment.

It received an immense amount of praise, for being atmospheric and engaging and well-designed and telling an interesting story through largely ludic structure and a minimum of game cinema. There were lets plays, there were rankings, there were recommendations and demos and trailers, and there was even an article (by, I learned after I read it, a friend of mine, Cass Marshall) about the roar button that echoed my own experience of the Bark Button in Okami.

If you want your Videogame Out Of Ten review, then yeah, it’s definitely a videogame, it’s one I really liked, and it’s short enough that it doesn’t overstay its welcome. If I had a big complaint about it as a videogame it would be that it’s a little too easy, in classic exploration platformer style, to get lost once you’ve killed everything in an immediate space. It has really good conveyance, where every part of the game you can do is presented around you and you’re never really presented with things you can’t do if you don’t realise it. 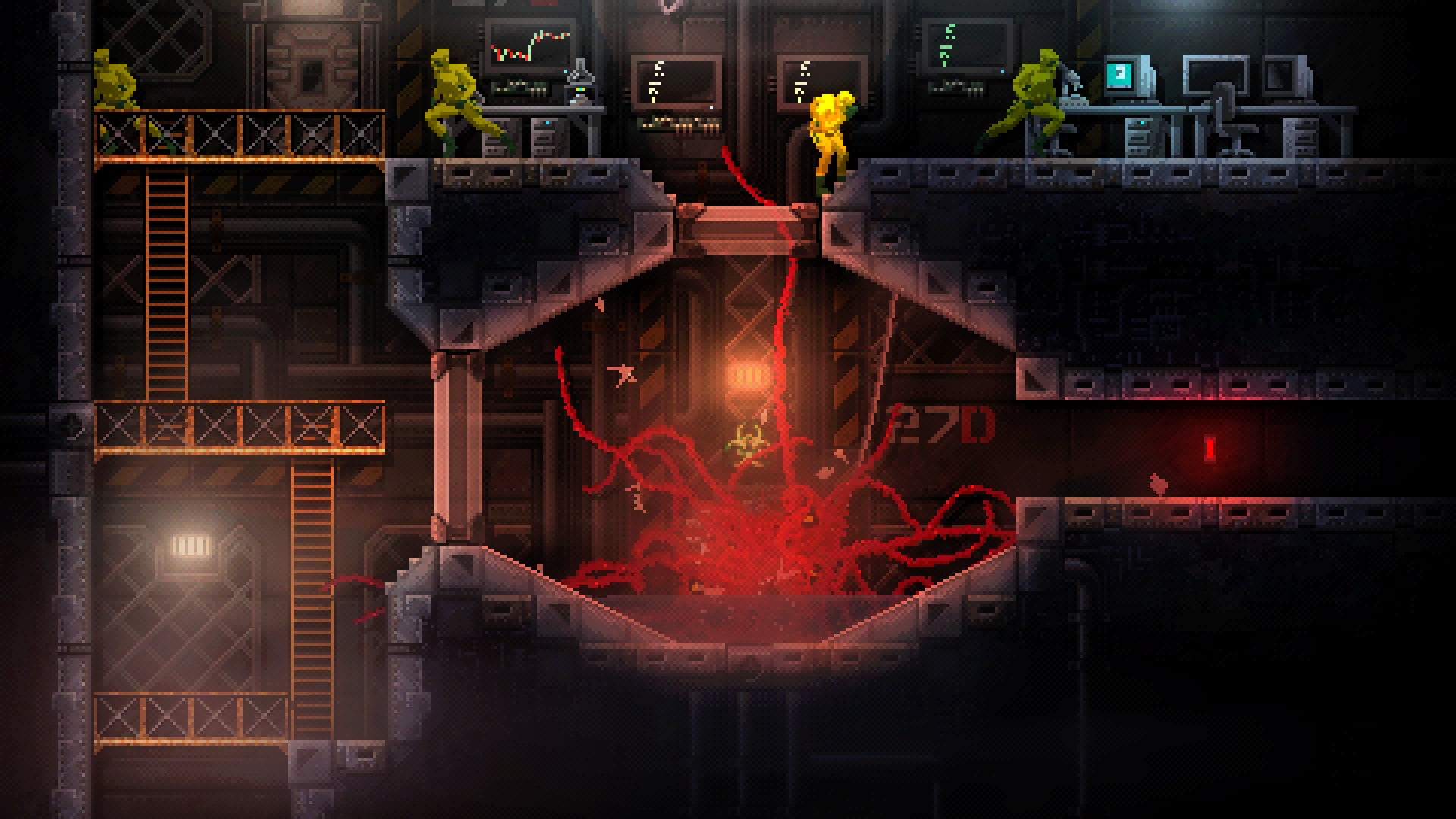 Carrion is a story about a contest between meat and metal. You are a creature of the purely organic; you crawl, you flail, you bounce and slide and jiggle and wiggle and jam and strain and reach and spit and lick and feast and swallow and consume and become as you thrash your way through this inhospitable structure that is designed to contain you. You run into grates and barriers and pipes and walls, and thick unfeeling concrete and whirring, slashing fans, and the painful sting of bullets being unloaded into your tender redness.

It is a game where you are literally trying to escape a facility designed to keep you, or something like you, contained, in layers upon layers of redundant security, where you will find opening one door closes a door immediately behind it because it was meant to, where doors are slow and where your smooth, fluid, perfectly safe, natural movements are clunky and weird and sloppy only because of the ways you have to interact with a crafted world for containing you. The videogame questions of why is this place so elaborate and why would these doors be designed these ways and why are there layers upon layers of security that overlap with one another, are all answered because this world was made to constrain a creature of perfect meat. The humans you deal with are no threats – they need their metal tools and devices. They need their armour and they need their shields and they need their guns. Without those things, you are free.

Without those things, you win.

You are the best meat. 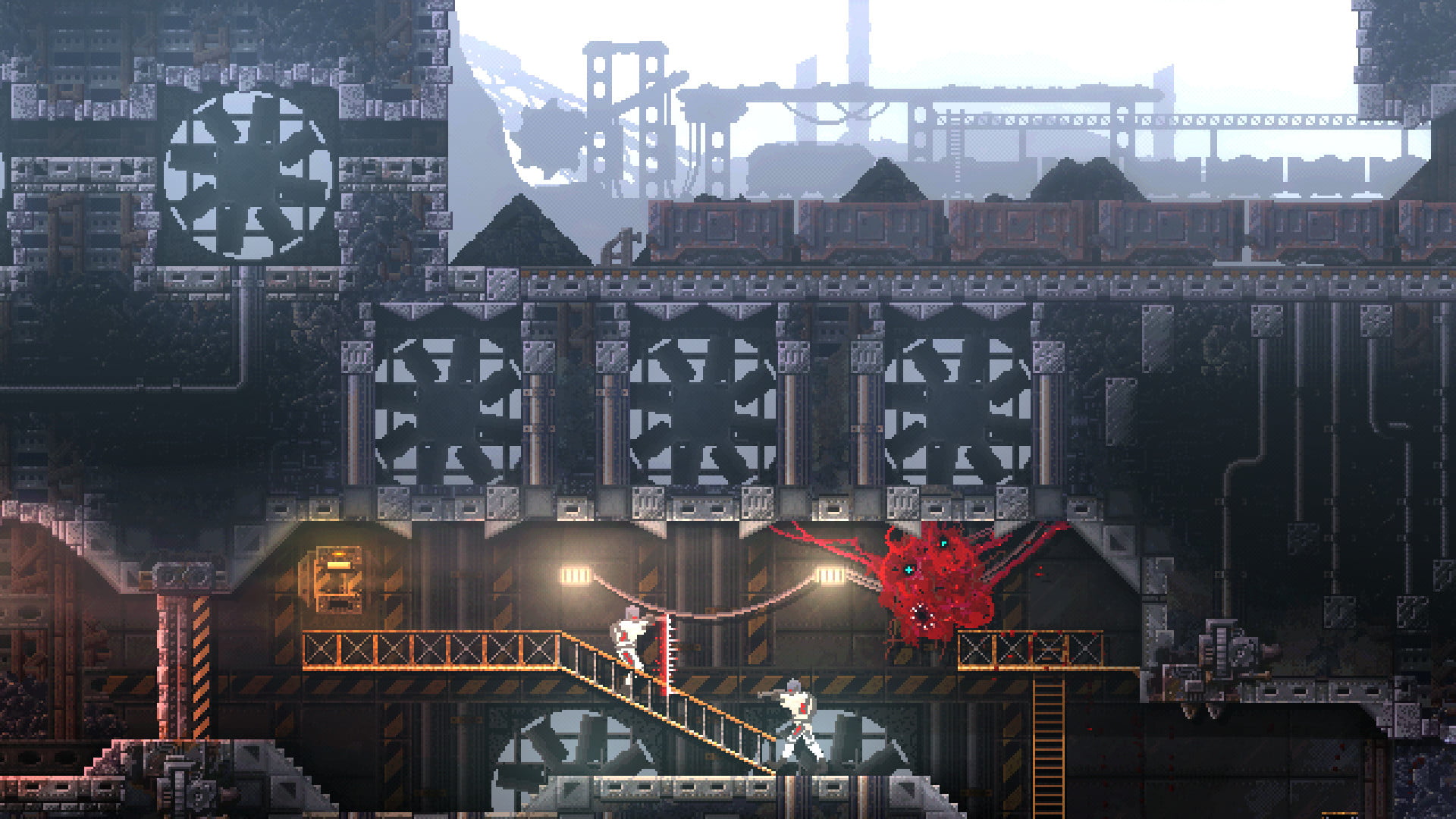 Playing Carrion is just beautiful. Oh, it’s not pretty – you’re wet and bloody and gorey and you make a mess everywhere you go, as you start to extrude your tubelike worms all over the surfaces, as you force the world of metal to recognise the glory of your meat. Yet as you play, you get bigger and more unwieldy, this gangl(ion) ball of mess and flesh becomes more vulnerable. In your best moments, you roar, you stab, you plow through your opponents, you shred through the weaker meat and make it your meat.

But then you’ll round a sharp corner and there’s a drone. Or a mecha. Or god help you, a flamethrower, and suddenly, all that power, all that roaring rage dissolves and you find yourself unconsciously retreating into the vents, pulling back, trying to hide in corners, trying to avoid being seen as you hiss at the dreadful metal devices.

I spoke, in the past, about how playing Hotline Miami feels like falling into violence – the repeated, endless cycling of taking the hit and getting the thing done and the frustration becomes the anger and how excellent the game is at making you feel like you’re Jacket, where the answers don’t matter, what matters is what’s next, what’s next, what’s next, and in Carrion, you will find, just by playing the game, by being and inhabiting the perfect meat, that you will behave as a monster in the space it doesn’t quite understand and cannot quite command.

You can fumble, you can struggle, and you can make your way through this world, but it will involve lots of probing, exploring, and your body will naturally become part of how you react to the world. Where there is roaring and rampaging, and inquisitive poking and probing, there is also bursts of frantic eating, throwing doors, tantrums and desperation as you try to get away from the fire. 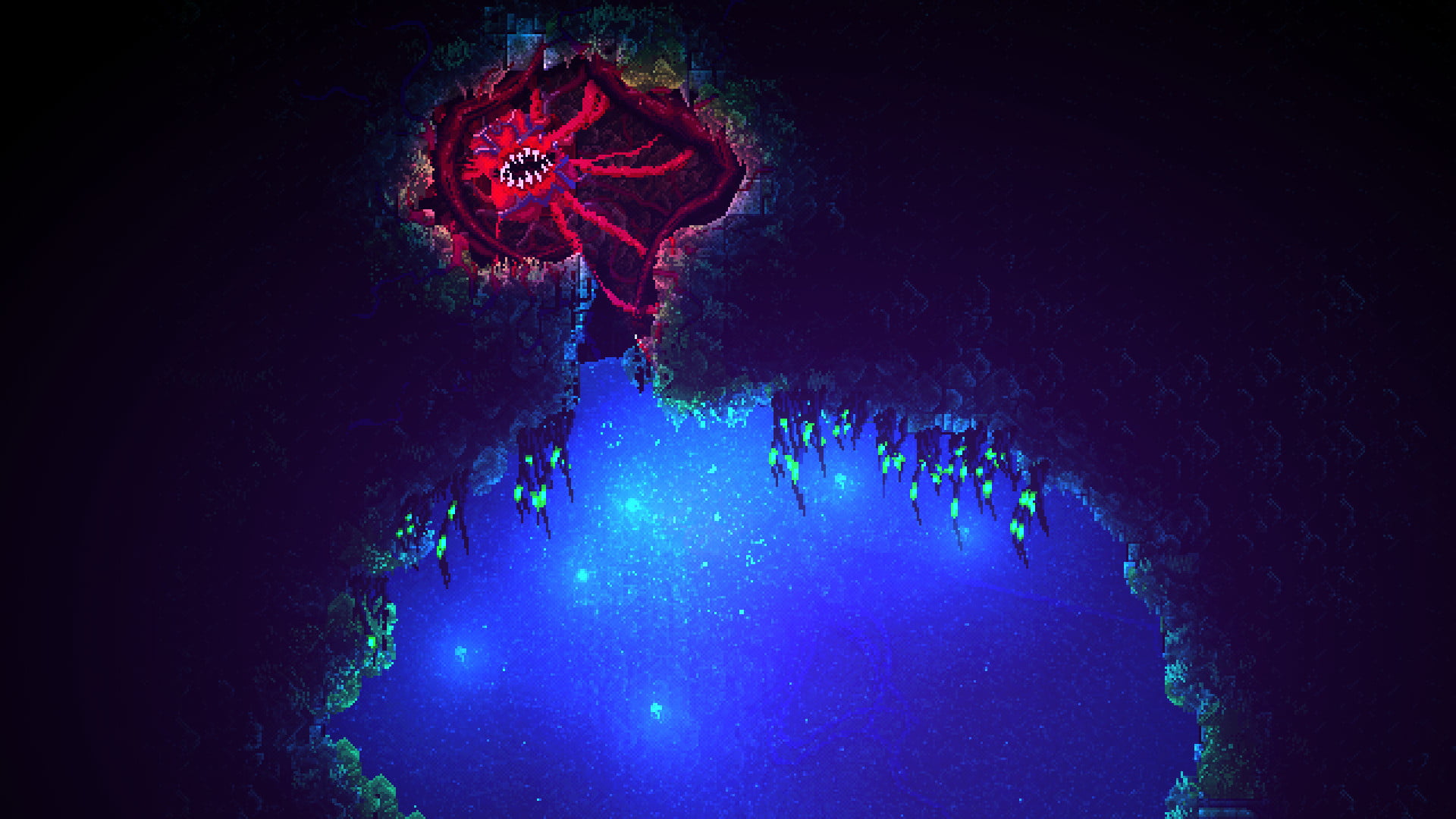 Carrion is a game I thought I’d give a shot at around 11pm, because I heard it was short. At 5.30 that morning, I realised I had to go to bed, and when I woke up, I fed myself, then finished the game.