What is there to say about this, the longest night?

Bloodborne, for those unfamiliar with it, is a 2015 PS4 exclusive videogame by From software, the makers of Demon and Dark Souls, and joins those games as part of the genre we hamfistedly call ‘Soulsborne’ games, because videogames are a space where it’s very important to constantly reinforce brand loyalty, I guess.

The game starts with you as a hapless person dropped context-free into some space or other whereupon a game kills you repeatedly and gives you infinite chances to avoid dying again. It is largely considered to be one of the greatest videogames ever made, which doesn’t seem to be wrong per se but as I played it, seemed more and more to be an insult to videogames in general as a medium.

I took notes as I played the game, which is a transformative thing with a From software game. The experience of these games often melts away so you don’t really know – you don’t know – how many times you try things, how difficult a game experience is until you really look at it in a numerical context. I did, so I have a very reasonable measure of how much of my life I was spending on this game, and whether or not the progress I was making made me feel good enough to merit that exchange. It’s very easy when you don’t quantify these experiences to think a game is ‘hard’ and just let that one word cover all your sins, as opposed to having clear information about how many days of effort it took you to deal with boss monsters that, amongst other things, do behave semi-randomly.

I also haven’t finished this game at this point. I got the game in January of 2017, and haven’t finished it as of October 2019. I don’t think this colours my opinion of the game at all, and I think it’s actually very important to look at the game from this position, rather than from the perspective of someone who having finished the game, is able to dismiss all the time spent as being ‘worth it’ in the end. 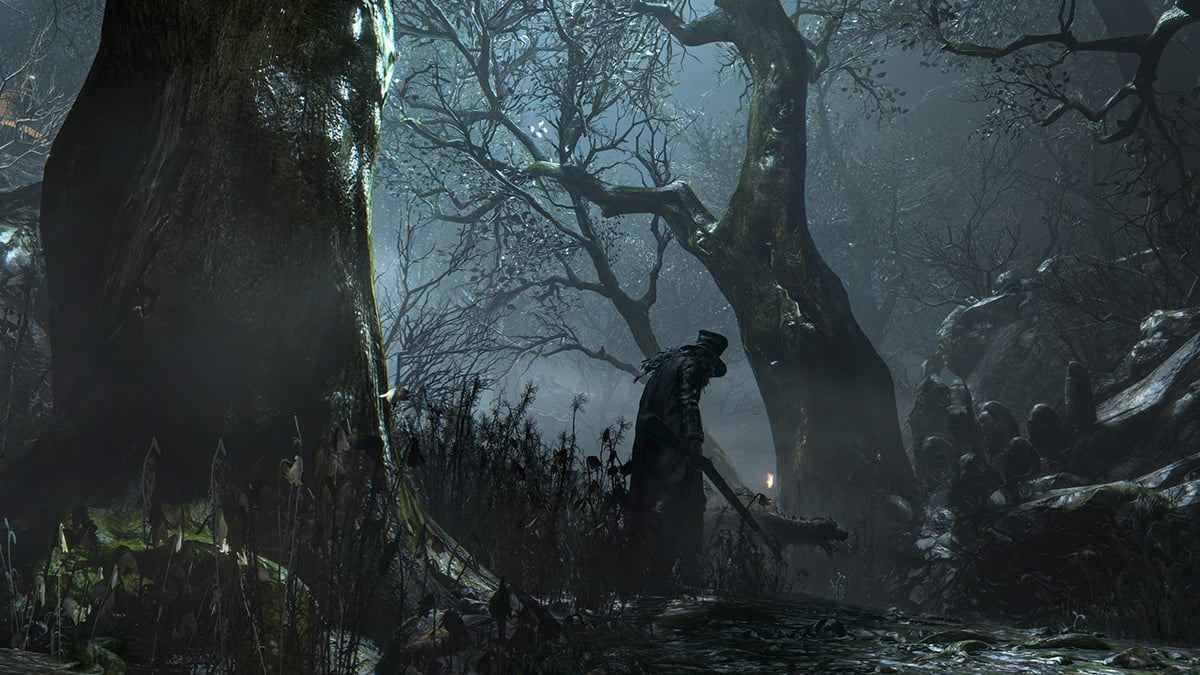 The biggest reason I haven’t finished Bloodborne is there’s a piece of invisible friction in getting me to get up and go sit down at the TV and play a videogame.  I have to be in the living room, have to have nothing else to do, nobody to talk to on my computer, no reason to want to have another process running in the background, and also, nobody around to watch me trying and failing to overcome challenges in a videogame that definitely makes you look like a badass when you get it right, and look like a dunderhead when you fuck it up.

This means that Bloodborne is a game I play almost only when I have no alternative. The moreish itch to keep going at it is tuned in perfect odds against my frustration with it, and when that formula has to run up against the sheer physical ritual of leaving one work area to go to another work area where I have much less to entertain myself and wait through loading times, I find myself struggling to come up with reasons to keep going.

This isn’t healthy! This isn’t something that a good game is going to do! When I’m enjoying Bloodborne it’s perfectly fun but when I’m not, it’s stunningly boring, and it’s easy to think that maybe, instead of playing this critically acclaimed game of the year, maybe I could get up and do the laundry instead.

This might sound like the game is bad, and it’s not! The game is lots of fun! You move in a way you don’t in almost any other game, you have an aesthetic to your presentation and character building that I find absolutely captivating, there’s a host of systems you can care about or ignore, as is the tradition of Souls games. I definitely like Bloodborne but I feel that in the rush to praise it for the way it makes you feel when it’s working, the gaming community at large has completely failed to grapple with the way it feels the rest of the time, discarding all the times that Bloodborne sucks as being ‘not really the game.’

It’s a fascinating magic trick, you know, the way that if your game hits the right note, people will ignore things about what the game is in the name of praising what they want the game to be. It’s like how Fire Emblem games have queer fanbases. Bloodborne gets to be an excellent, difficult game, because we don’t talk about the ways it’s tedious and easy. 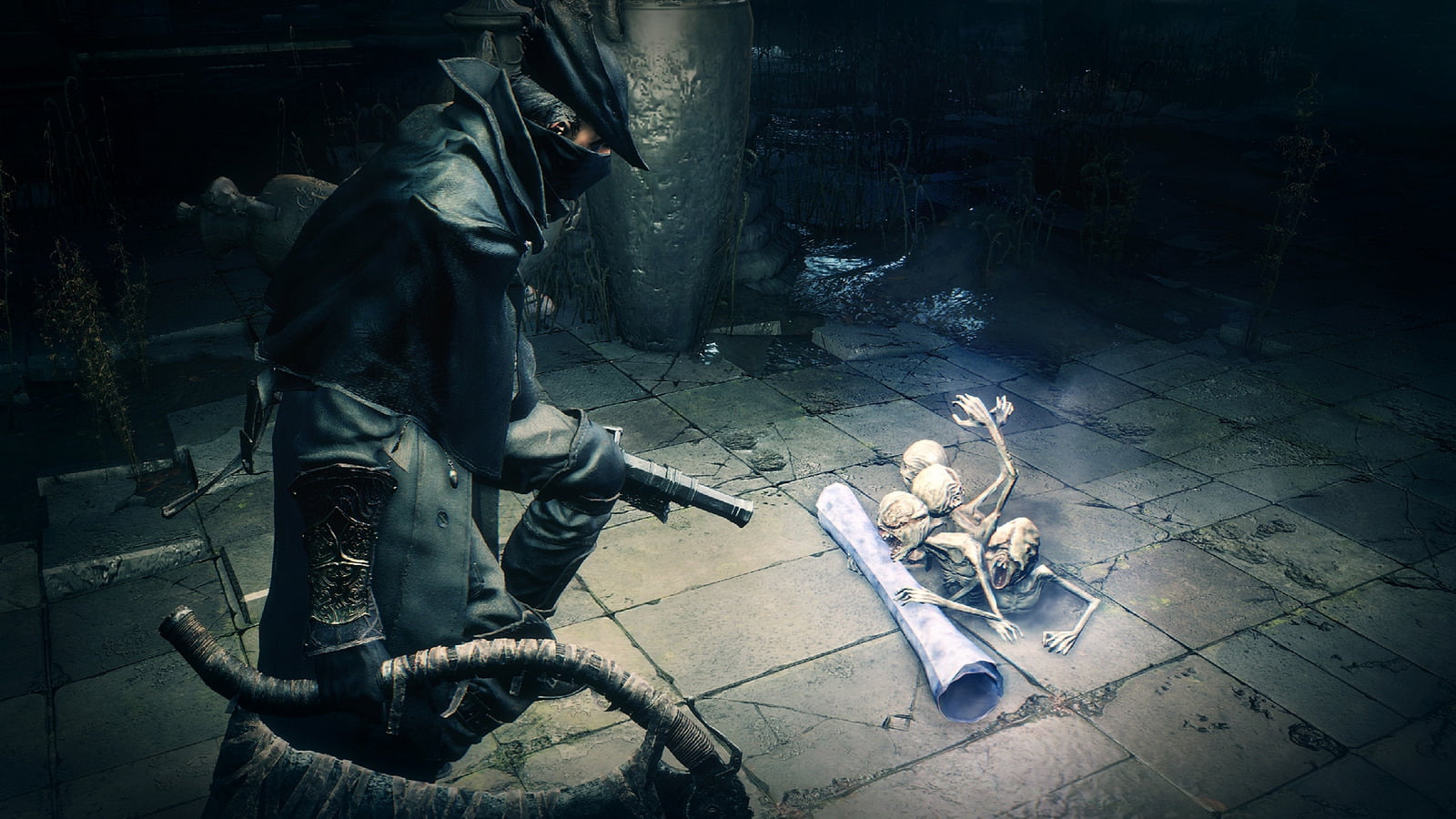 Bloodborne is a critical darling and it’s one of those games that we get to ‘take seriously,’ so a fifteen hundred word essay about how Bloodborne handles, I dunno, church iconography, is acceptable, and you can say whatever you like about whatever other subject you like with the game serving as an adequate excuse, provided you hit the right obsequious notes. You know, talk about how it’s gorgeously atmospheric, drenched in scary imagery, tells half a story and leaves you to fill in the rest, is deliberately obtuse in the way that From games have always been and that we on the other side of a language barrier are left convinced is in fact, brilliant inscrutable storytelling and not just handing in your first draft.

There’s a lot of talk about how Bloodborne is a great game, and part of that is because the game is really pretty good especially once you get past the opening. There’s talk about the meaning of the bosses, which is an interesting thing you can talk about, if you can put those bosses in a meaningful context by finishing the game. Of course, if you can’t, you don’t get to talk about Bloodborne. If you can’t finish the opening part of the game, you’re set aside from the conversation, and that means nobody talks about it.

Fact is, the opening twenty minutes of Bloodborne sucks.

In any given Souls game, there’s a clever trick of the design where if you fail, you can retry endlessly, and failure building on failure results in you steadily building up a bank of tricks and techniques. The opening of each of these games is a safe space, some place where the game presents you with threats, but never refreshing threats; traps don’t reset if you survive them, monsters don’t move around. Once you get to the first hub, you can try exploring all you like and that exploration will yield you souls you can use to level up to give yourself advantages as you learn the place you’re dealing with. The soul system, the way that even small repetitious practice changes the game balance, is one of those things that Dark Souls does beautifully, rewarding patience in a way that serves to underline the way the game isn’t hard in the way that games like Quake Arena are hard, or hard like Sudoku is hard: it’s time consuming.

Bloodborne‘s opening has the gimmick that you can’t level up until you’ve seen your first boss, and the method for recovering health is something you need to pick up from defeated foes. You can essentially put yourself in a position where you have to execute perfectly in the opening area because you don’t have any blood vials, and enemies that drop them may do more damage to you than the vial heals. This puts you in a loop of debt where the normal method of overcoming Souls difficulty, of turning practice into prowess, is not available, the game can’t be made easier by levelling up.

This means death after death after death, until you see the Cleric Beast or Father Gascoigne, and you have to deal with things in the difficulty the game sets you, which is one of those ways you can realise that From aren’t actually very good at tuning difficulty. The Cleric beast works completely opposite to the enemies you’ve dealt with thus far, and Gascoigne is both bullshit difficult as a first required boss, and he punishes you for trying to come up with a solution. Compare him to the Blood-Starved Beast, who has a weakness that you can exploit, and pay to exploit, and are rewarded for exploiting!

If you’ve sunk another ten hours into the game, this is fine, and you forget the way this opening section of the game is actively repellent, which is interesting given that one of the things this game is praised for is its, 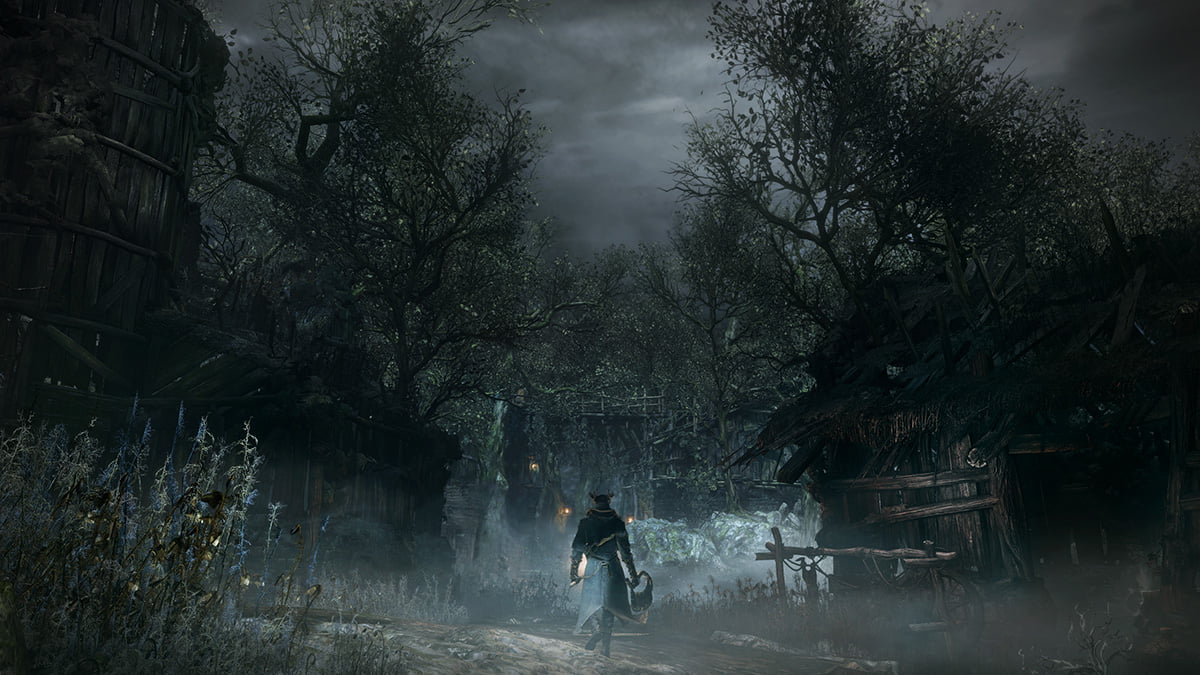 Bloodborne is a really good game, and it’s one I like, but it’s not a game with a healthy critical ecosystem. It’s a place where the game can be criticised but only when praise is heaped upon it, its fiction can be analysed to an extent that it’s literally someone’s full-time job, but not where you can point out that the fiction is incomplete. Like Voltron before it on this blog, it is a story half-filled, and its critical framework wants to regard it as instead thoughtful and thorough, as if there is some single, true fiction behind it all to ‘get,’ that there’s some ‘truth’ that holds the story together.

Yet at the same time, I am absolutely in love with the game this game wants to be, with its unreal time scale, and its amalgamation of horrors, and I think that more than anything else, what I love about Bloodborne and its fiction is the way that it spares nothing of blood. Blood in our culture is salvation, it is time of your life, it is a vessel for diseases, a metaphor for wealth, it is a connection to our ancestors and it is a sin for our children. When we talk about the building blocks of storytelling and the true and false of fictional worlds, there is almost nothing we use as much or in as many ways as blood, and Bloodborne is a large enough game, with a broad enough potential, to be willing to use all of them.

And when I say that, there’s a momentary thought from the audience; wait, I see people respond. Not all the blood, right? That blood is off limits, right?  And I have to say… no. That blood is not. Yes, Bloodborne is one of the only horror videogames I know of that includes references to, oblique as they are, menstrual blood, and the ways that control over that cycle is part of the ways we control women.

That is the way of things in Bloodborne. Your story can be about failing your family, or living your best life, or internalised misogyny or struggling with your own religious boundaries, but no matter what the story is about, what the story is really about, is blood.