Videogames do a lot of work automatically, which means that there’s a lot of ways that two very similar games can be meaningfully different, and so exploring them is challenging. What’s more, communicating that difference can be challenging, too; I could tell you that Titanfall 2 and Dishonored 2 are both followups to successful games with alternative movement schemes and a buddy that becomes part of your mission flow, with a setpiece level including alternate timelines, but if you know videogames, you know those points of similarity are way less obvious than the points of difference. After all, in one of those games, you’re running around with a gigantic mecha and the other is a steampunk stealth game.

This is because there are layers of systems and hardware that sit between you, the player, and the game you’re playing, layers that are not only not under your control but are very specifically developed and defined by someone who isn’t in the room with you. This means that videogames get to be very complex in a way tabletop games aren’t when it comes to the immutable, consistant set rules of the game. Tabletop games get to be way more sophisticated on all the levels of players playing them, though, because the rules are dynamic, and under the control of the players all agreeing to play the game the right way, together. 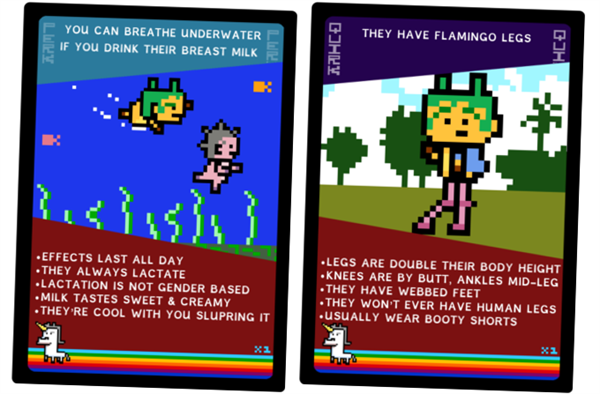 You might sometimes hear this summarised that games have rules but videogames have laws. This is a nice pithy phrase that doesn’t quite get to the root of things but it can suffice as a teaching tool. This can mean videogames have a lot of ‘content’, and that content is things like levels and tools and weapons and animations and that stuff is all served up to you, the player, like the results of a play or a movie experience. There’s not a lot of you there and there is a lot of the people who made the thing, or at least, the people you are pretty confident made the thing.

Tabletop games don’t have that, they exist in a space where play is more direct, where the players are the enforcers of the algorithm, and where the game is capable of quietly hiding behind your friends, where what they think and they say about a character is not contradicted by the game’s rules or systems. This can mean that some really queer games may not ever be explicitly stated as such (play Dungeons and Dragons with queer people and watch how often the world becomes a Land of The Gay for example). The queerness in a game is often about whether or not the game gets in that way, or bothers expressing anything. GIPF for example, isn’t exactly a very queer game on the face of it, because as a game it’s mostly about interactions of dehumanised pieces. Mostly, a game needs to be about or have some reason to mention relationships, perhaps as a mechanic, or as a way to build character.

Billionaire Banshee is a game entirely about entirely potential relationships. 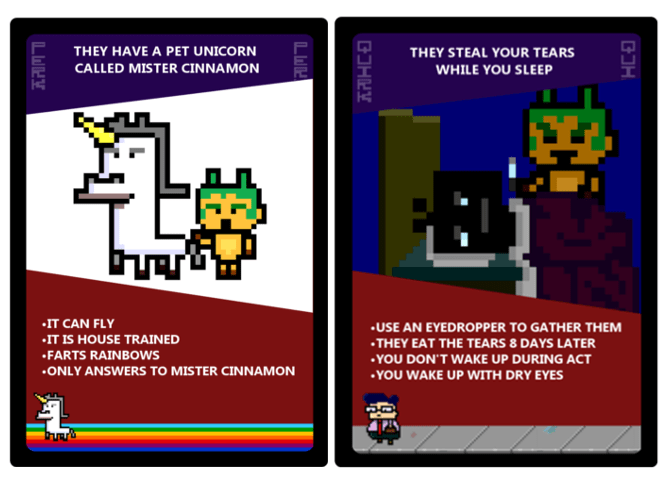 Here’s your basic gameplay loop. You get two decks of cards; one is good things, one is awkward or difficult things, and you flip one of each over, decide in secret if you’d ever date that person, and then the rest of the player group vote on whether or not you chose yes or no. The decription of the game is simple enough that when I tell you that, you know how the game works and can probably just make your own version from there.

The thing with these options is they’re not things like ‘squeezes toothpaste from the middle of the tube’ vs ‘knows how that song you like goes.’ It’s outlandish things like, say, ‘is a billionaire’ and also, ‘is a banshee.’ The game provides bullet points to make some things clear and to keep dealbreaker propositions from being too obvious – a partner who can fly may seem good, but if the card didn’t make it clear they can fly you places safely, it might be easier to check out of that dating pool.

Billionaire Banshee is a game I think of as a queer game but it’s mostly in its dedication to being a game about relationships that is also pointedly and aggressively nongendered. The partners are always described not in terms of their genders, but always in terms of ‘they’ and ‘them’ and that ambiguity means they can be whatever your preferred gender is, rather than assuming a deck of boys or girls would be the ‘proper’ way to do things. 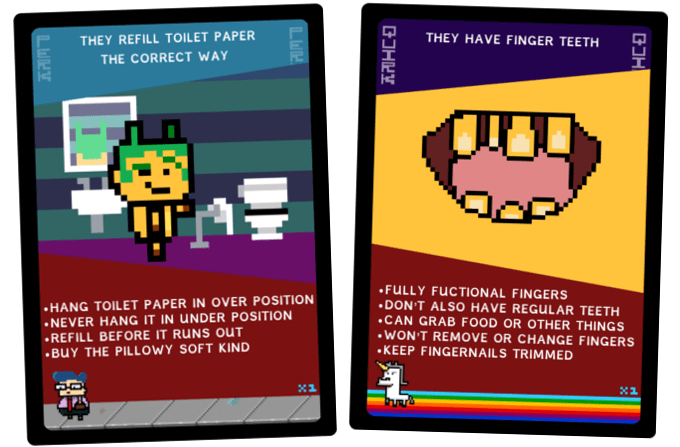 Is that enough? I know that’s the question I keep asking myself as I work on queer stuff for Pride Month. But when I compare Billionaire Banshee to perennial and awful favourite of the gaming space, Cards Against Humanity the choice is a little more clear.

Billionaire Banshee’s neutrality on relationships makes it a space where queerness exists and is completely comfortable, without ever having to make an explication.

I think what I’m getting at here, and why I like Billionaire Banshee is that it’s a game I’d hand to a queer person and say ‘hey here, check it out,’ without feeling I have to warn them or apologise to them.