Is it boring now to hear that I love the Ace Attorney games? Is it? I don’t know, I don’t know if you tune in for everything here. I don’t know if it’s getting tedious to hear that I find these visual novels extremely charming or like tracking their evolution through interface technology or their constant desire to try new and interesting things or their charming characters, or their laugh-out-loud out-of-context comedy. I hope it’s not boring because I’m about to bang on about it for god-knows-how-long.

Apollo Justice is the fourth game (kinda??) in the Ace Attorney series, which are made in Japan with Japanese sensibilities, about a stylised version of the Japanese justice system, and localised in one of the more comically ham-fisted ways. These games are great and inventive and funny and charming and all that good stuff, and this one is, well, it’s one of them.

There’s going to be some mild spoilers, because some characters are surprises introduced after, like, the first case.

The Ace Attorney series does a good job of expanding and moving on if you play through them in order, without generally getting that escalation problem that, say, World of Warcraft has going on. Because of the incredible power of the prosecutors in the setting, the fact that Phoenix approaches something like twelve not guilty verdicts in a row isn’t seen as something to be feared, so the games can reset the tension levels at each game, and shift perspectives, adding or removing characters all to keep the games and their narrative fresh while still using a relatively limited set of game tools.

Apollo Justice followed up three Ace Attorney games and did a time skip, then gives you a media res beginning (as these games tend to do). You’re not playing Phoenix, you’re playing Apollo Justice, and your first client that you’re representing is Phoenix Wright, who’s been accused. 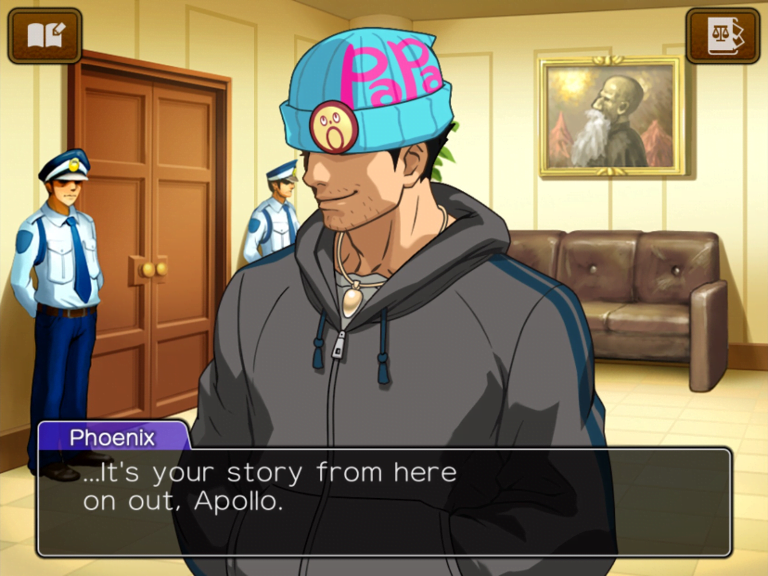 Okay, so now you have to catch up. You have to work out what happened between those games, why Phoenix is now a hobo wearing a hoodie, how to get him out of this case, and what happened in the incident where he’s been accused of murder because he’s not going to help you and what follows is a classic, solid Phoenix Wright game with again, inventive and funny and charming and so on.

What makes this installment so particularly weird is that it tries to thread a needle most stories that involve magic want to avoid, because the Ace Attorney games, while ostensibly about legal proceedings are also in a reality where spiritual magic and ghosts are as real as it gets, and you can’t bring them into the court to volunteer evidence. It’s pretty great the ways this is used for the convoluted puzzles of the courtroom, too, because the challenge is never as simple as ‘tell people what happened’ as much as it is ‘construct a line of evidence that gives you the opportunity to volunteer what happened, possibly through a witness, possibly through a talking parrot.’

And Apollo Justice is when they try and involve stage magic.

Normally stage magic doesn’t live in the same kind of stories as actual magic magic, because as I’ve mentioned in the past it’s really hard to do one of them and really easy to do the other, narratively speaking. In Apollo Justice, though, stage magic is not just part of a case, it’s part of the greater narrative of the whole game, and that is expressed through the inclusion of my favourite Ace Attorney character, Trucy Wright. 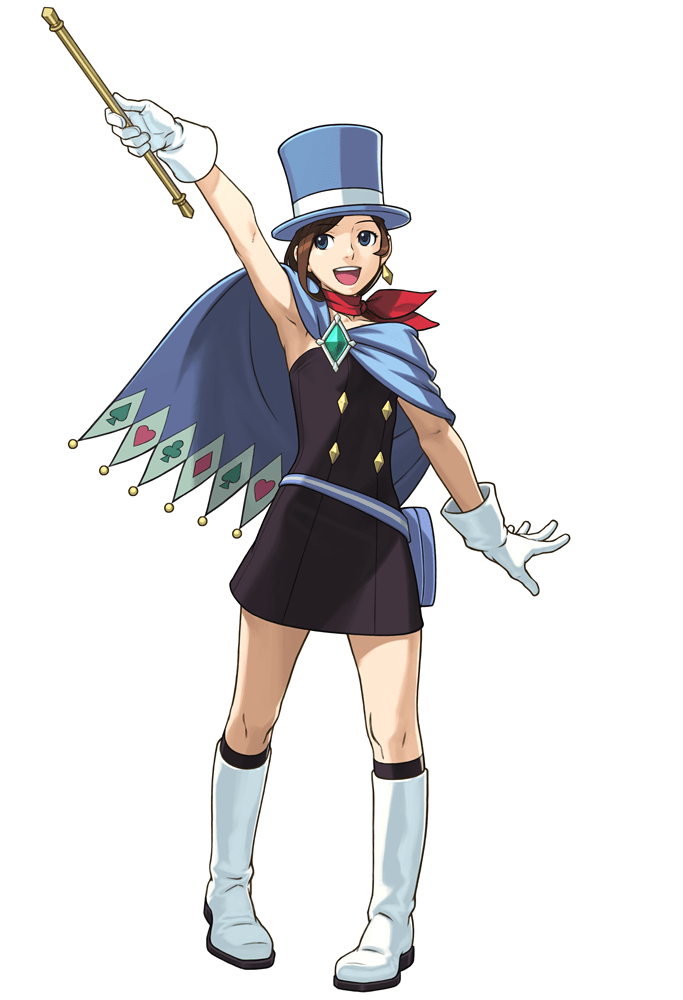 Trucy is a stage magician, and she’s your assistant. In the first three games, your assistant is a spiritualist, someone who doesn’t provide a lot of useful insight into puzzles because she’s a bit of an outsider, and who largely only complicates thing by her ability to channel spirits and talk to, well, ghosts. Trucy isn’t that kind of magical girl, she’s an actual conjuror, someone who has an insight into how magic tricks are performed, and she’s really good at it.

One case hinges on the window of time in which someone could, possibly use a distraction on a stage to do something nefarious, and if they could or could not relates directly to your client’s guilt or innocence. You have to work out how the trick was done, deduce the mechanisms – generally – then find a way to prove that in court to make sure that the information is entered as evidence. Ostensibly, you’d imagine that in this, having an actual magician on deck would be useful, but remember, magicians don’t necessarily do tricks the same way.

Wait, hang on, Trucy is from the same school of magic as this magician! She would probably know the trick.

But no, Trucy didn’t get educated with him, not yet, so she’d have to deduce the trick just like you do.

But no, Trucy won’t tell you.

Trucy won’t tell you how the trick is done, not because she can’t work it out, but because it’s a secret. 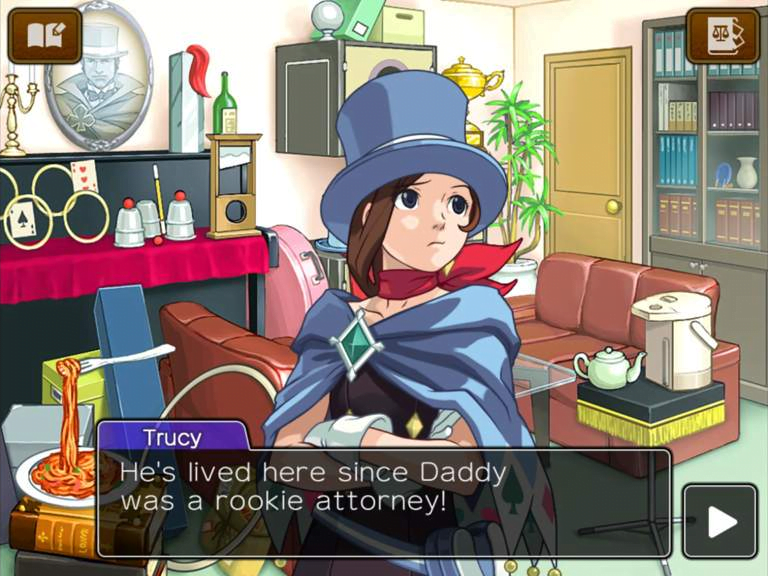 This is obviously intensely frustrating at the time, but it’s the kind of thing this game does that cracks me up now. Really, the audacity of the game’s narrative is part of what I love about it, where it presents you with very silly scenarios, and tells you that everyone involved is so focused on following the rules that someone’s going to go to jail unless you get the correct testimony from a parrot, and then when you do, everyone goes along with it because, hey, the rules, we said it was about the rules.

Now, this sets itself apart from your typical mystery game and it belongs here in the context of magic month (sha sha sha) because the story you’re presented with is one where magic is exactly and entirely about working something out, about the process of performance through practice, and that means that a chance to examine a gimmick’d device or space gives you the tools you need to reconstruct the process of the entire trick. It’s a rare treat of a game where a magic trick is shown and then the way the trick works is something that not only matters (so they get it right), but that you’re expected to be able to work it out but only once you’re given information the performer obscures.

Magic is in many ways, a puzzle, and in this game, the puzzle the narrative presents you with is the same puzzle the magician has to solve, and I love it.

I love these games, and I love this game in particular, and I recommend you give it a shot. There are some gimmicks and some difficult puzzles, but for the most part, they’re excellent narrative adventures, very funny, and is the only game I know of you can buy where a character uses a pair of bloomers to disappear unnecessary items.