Writing about visual novels is hard.

Writing about queer themes is hard.

Writing about anything at all right now is hard.

I first up want to disclose that one of the creators of this game sent me a copy of a code for this game. I have been such a bad correspondant, I don’t actually know who did that. I also want to disclose that I haven’t finished this game. I’ve gotten chunks of distance into it, and I’ve made multiple attempts to play through it, but the nature of the kind of game it is creates… let’s say, tension about that.

Initially, I wanted to review this game the first month I got it. Then I played it for a bit, hit my head on a wall and thought no, I need to make sure I get this right. Specifically, I’d been asked by the creators to take this game seriously and do my own deep dive on it, the way I often did with other works, like how I used Legend of Zelda: Hyrule Warriors to discuss the idea of hypertext.

You have no idea how much it matters to me to do right by someone who asks me for stuff like this.

In fact, I am writing this twenty minutes before my deadline. I have a deadline, because I am forcing myself to look at, and focus on this work, to talk about it and take it seriously and not put it off for another year, even though the urge to do so is strong, to make myself say oh no, it’s too much, let’s not.

I wanted to stream it, once. I thought it’d make a good video fodder, until I realised that at root, this is a semi-voiced visual novel with a huge cast and a bunch of women in that cast and I would be at best narrating the playthrough, a playthrough that, read aloud, would take quite some blimming time. Then I looked into FAQs and guidance for the game, with an intention to see what kind of ‘fast route’ through it I could divine. And so, the time slipped by and I didn’t play it and I moved on and figured ‘I’ll do it next year.’ 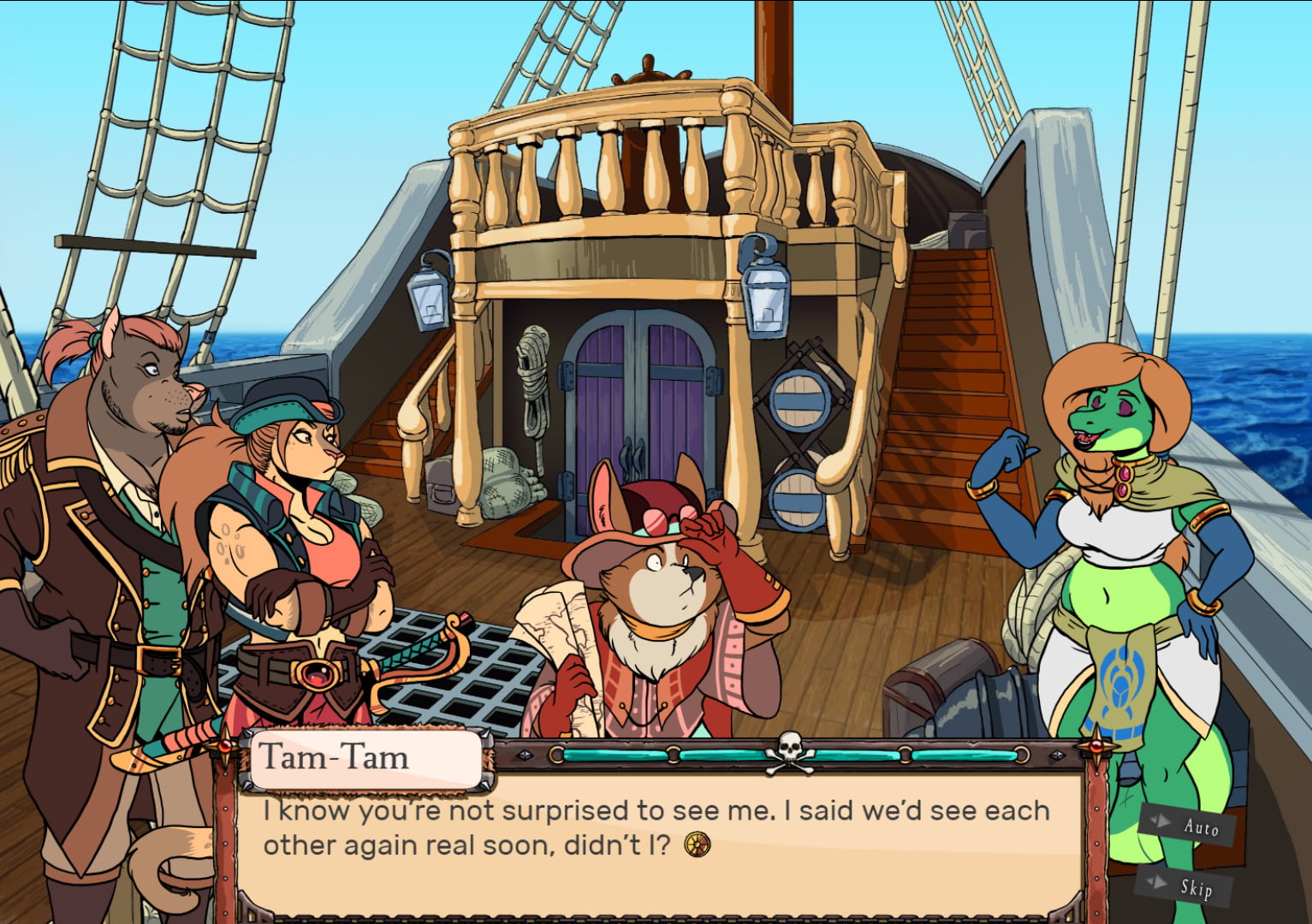 A Pirate’s Fate is a ‘transformative furry visual novel,’ and if you want a product that’s what it says on the tin, this is it. If you want to just ask me ‘is it well written? is it fun? would you recommend it?’ I mean, yeah, though I wouldn’t treat me as an expert. I’ll give a game a lot of credit for just having values that it’s willing to state, show, and care about. It’s on sale right now on Steam, check it out.

I guess if you’re asking about ‘game units,’ I’d say… yeah, this is definitely one full game unit. I liked it, and I don’t think it’s a misspent money, especially if you like replayability. I want to restate: I haven’t finished this game, I’ve restarted it a lot, and I’ve mostly watched lets plays and read about it, rather than played through it directly.

In fact, here’s your bonus academic fact: This game is about a lot of choices and variations, spiderwebbing opportunities spreading out from one another, and it will take you quite some time to play through all the routes that permeate differently with one another. In that way, this is a game that invites hypertext, that wants you to suggest you should be playing it over and over to see the way the story, while still following a general thread, is going to be changed by your making a number of small choices and changes along the way.

This game has a lot of work put into it. Honestly, this is the kind of visual novel more people spoke about rather than the harping on about games like Doki Doki Literature Club, which is mostly trading off what people think Visual Novels are like, rather than this, which is just wholly and honestly just what a Visual Novel is. 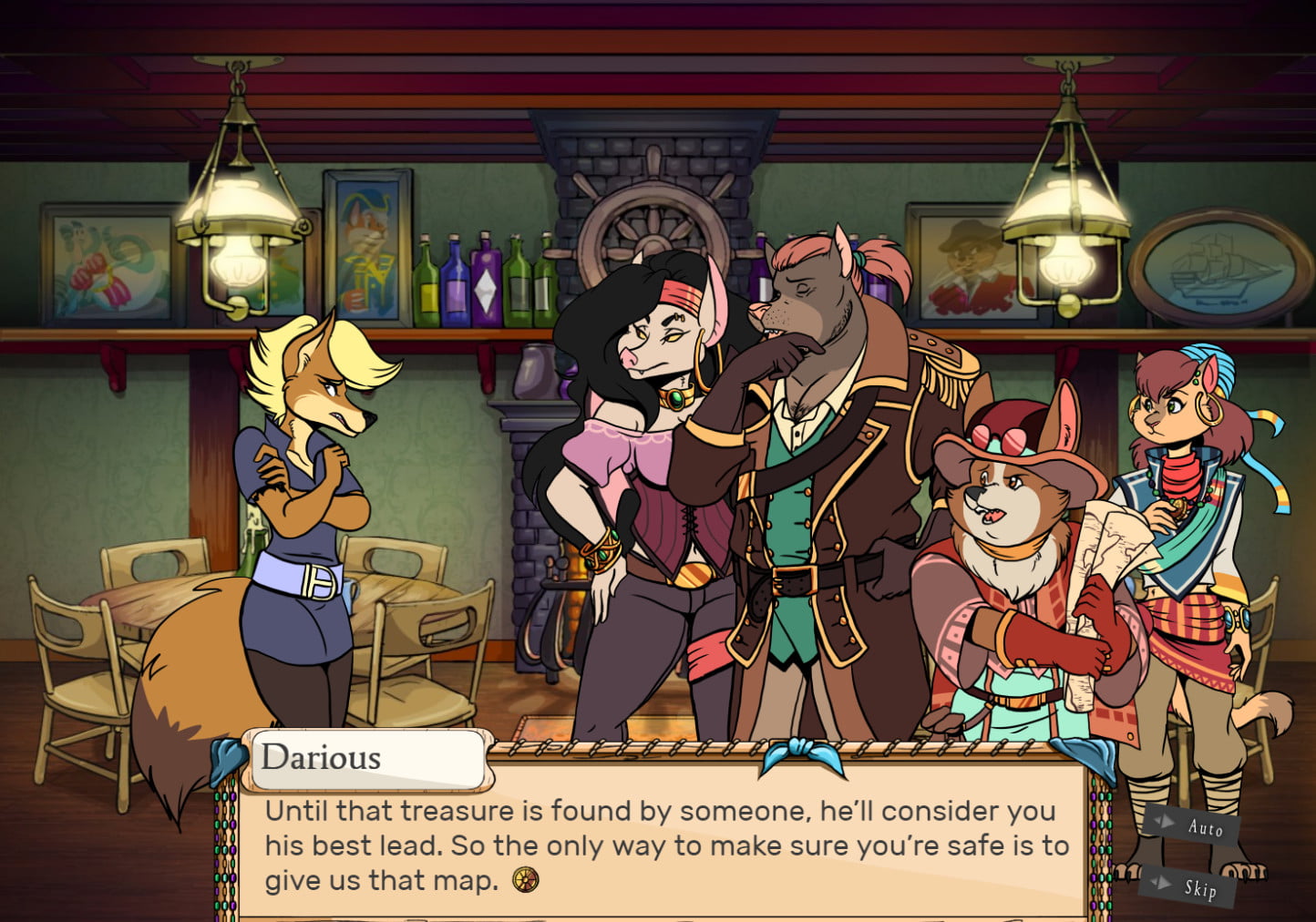 Now we’re in it up to our shins, so let’s talk about the furry community.

Furry communities – taken as a whole – are also extremely queer. Reactionary and conservative furries are not a new strain of them, but the furry community has pretty much constantly been a place that draws in people who are marginalised and othered by other communities, usually because furry media tends to tie into the subversive. Not to be too proscriptive about it, but think about it this way: Furries are extremely easy and clear for symbolism, we often distribute their work to children (think about the Disney’s Robin Hood) which can make them nostalgic loves, and when you’re struggling for your handle on your own identity, imagine living in a social space where everyone chooses to express themselves through a chosen physical way.

Furry spaces in the internet, especially as long as I’ve found them, aren’t just spaces where someone goes ‘oh, I make furry art of random things.’ They’re so often characters, and many of them are meant to be depictions of the artist, and there’s even a word for it – the fursona. Now, I’m not going to bust out my supervisor’s work on the persona, but what we see in the media around us informs us of how we relate to media. A persona’s fursona is a really personal, intimate, creative act and the community of furries invites you to do it.

Look, I created a lot of furry art. I wrote a bunch and drew a bunch and sold a bunch. There was always a question, and it was usually asked with a sort of sly sweetness: but which one is your fursona. And I always had the disappointing answer that, hey, look, none of them. That made me the outlier. I was odd in that regard. 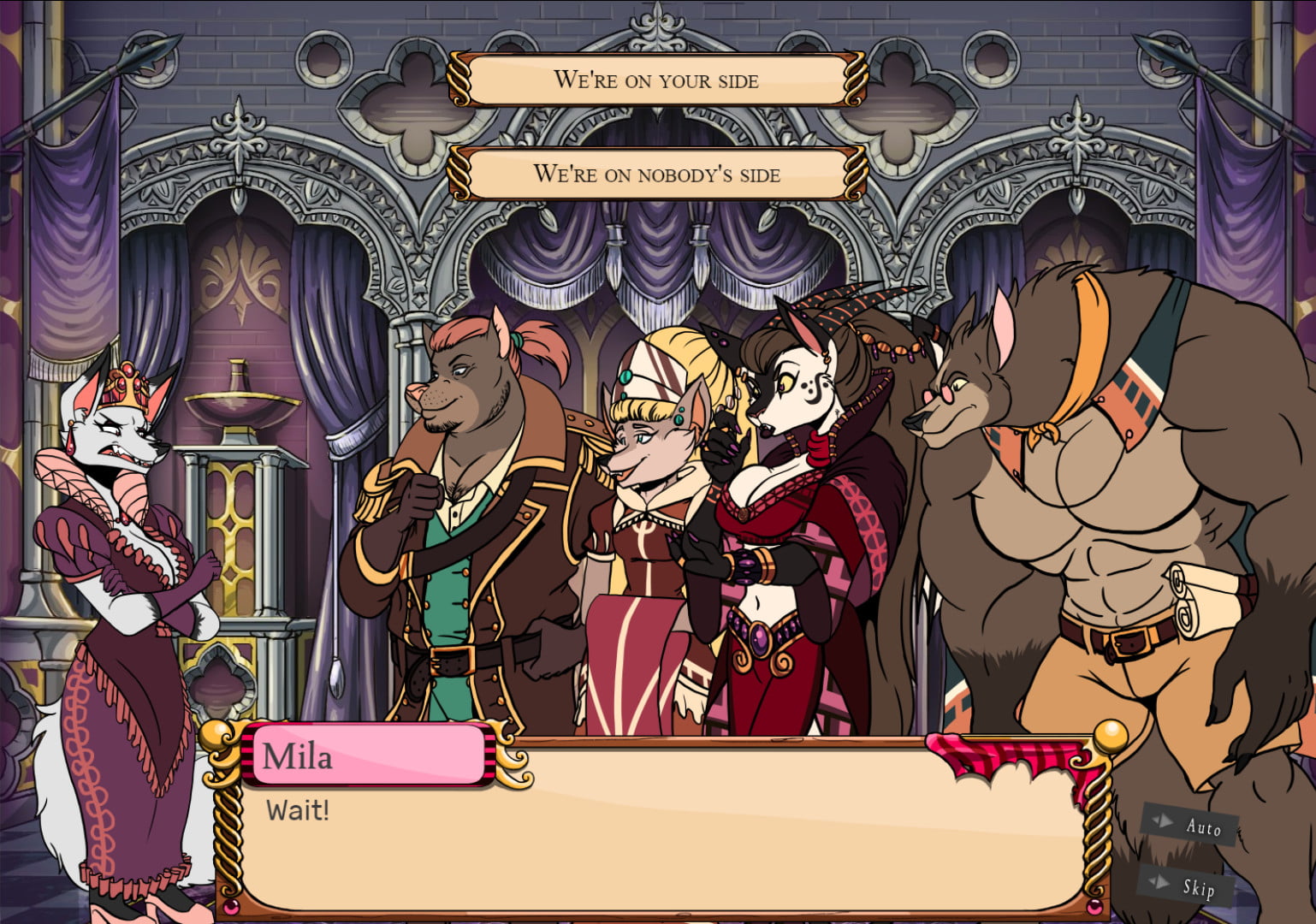 Back in the 1910s, L Frank Baum wrote The Marvelous Land of Oz, where the plot twist of the story is that the missing princess Ozma the story had been spent its time seeking was hidden as the boy Tip. At no point in this revelation is Tip bemoaning the horror of discovering that he’s a girl. Rather, when he’s presented wih the secret, he figures that he’d best change into a girl, because he was never really happy with being a boy. Gender changing is not really a thing fantasy universes leave alone (though they often should).

I’ve remarked about how the Girdle of Gender Changing is a classic example in D&D of bringing this idea up for no real reason, except to bring it up. In this game where characters transform, then, and there are complex choices about it, does it bring up The Gender Changing?

What’s significant about it, and a reason I want to hold this out, is because this game does something very smart, and presents you with multiple characters changing, then expressing how they relate to that change. It’s not a singular experience with a singular result. One character has no vision of gender as it relates to the body, so they’re unperturbed. One character is upset by the coercive change, but comes to terms with it and finds a way to cope. One character expresses distress, but is really okay with it, because, you know, I mean, ha ha, who wouldn’t be? This is to say, one character can be magically distressed by gender transformation, and two characters are shown coping with it. 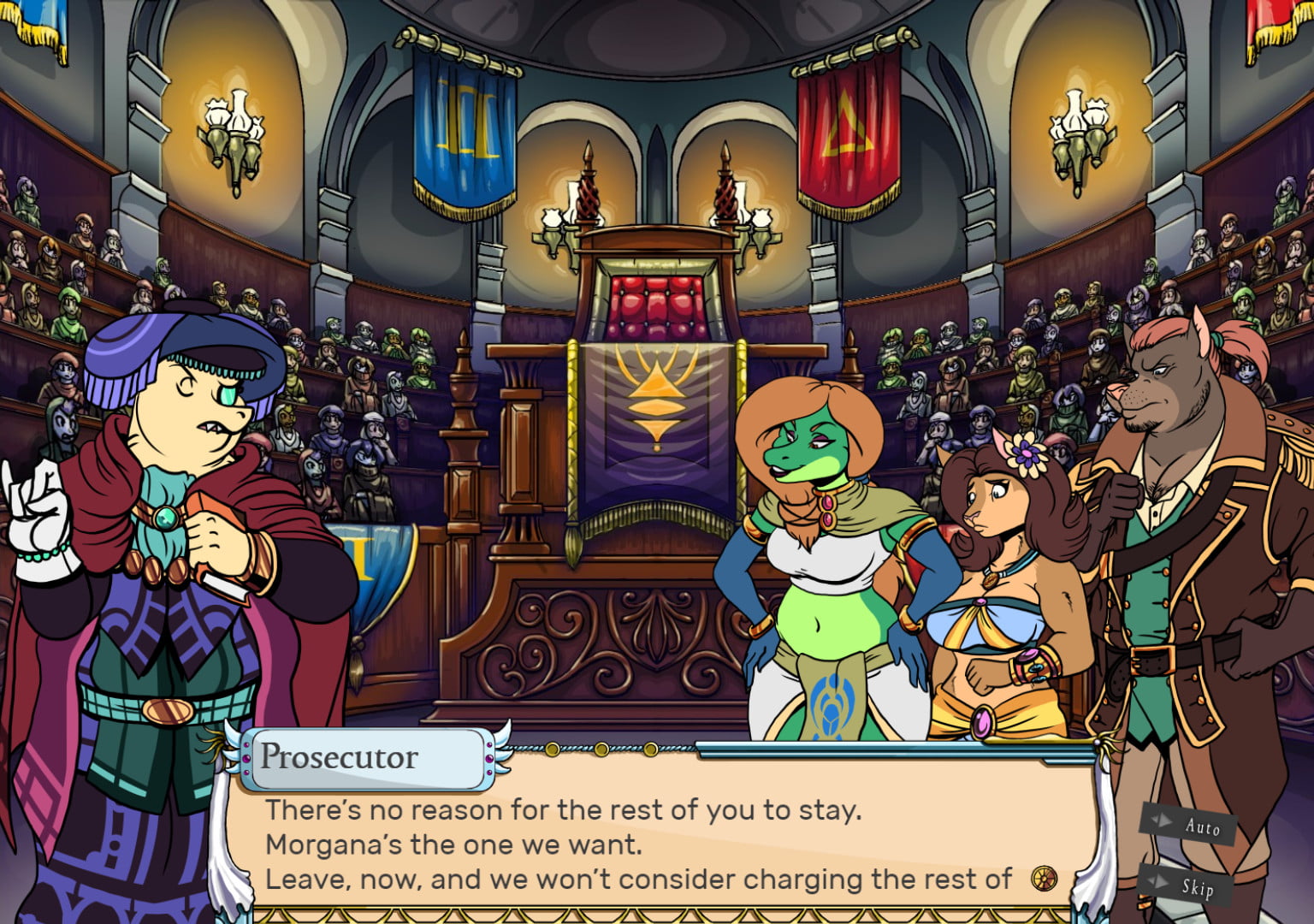 The point of this game is that it is giving you ways to play with characters bodies, but it also obscures how you necessarily get to play with them, right? I didn’t go into this thinking ‘here’s my goal,’ and I am embarrassed to admit, I didn’t go into the game thinking I was going to get anything transformed. I just went with my general rule of thumb in visual novels: See if the game handles it if you try to act like a generally decent person. Be nice, and see if the game breaks.

You would be surprised how often it breaks.

What this seemingly trended me towards (and I may be wrong), is that my protagonist character wound up being nice, and also, fat.

This kinda twisted my ears a little. Because look, there’s a lot of stuff bound up in the positioning of fat bodies as feminine and motherly, and if you’re looking for fat girls in media, you are definitely going to see a lot of fat, matronly girls. Fatness is typically regarded as being connected to the feminine and it’s deprotagonising. Also, without checking every line of dialogue, I can’t say that this game doesn’t have some people insulting her for being fat, though there was nobody commenting on it in what I read.

So, on the one hand: Stereotypical fat traits. On the other hand: Nonjudgmentally positive fat girl character. On the gripping hand: This is a game about transforming into things so this change is about presenting you with a choice.

This is also definitely out of my depth. It’s really easy to run over fatness as represented in media, because it’s a big topic that’s handled badly, in general. At the same time, I know people who would be very happy to be rewarded for being nice with a body they find appealing and attractive, and not be told that look is incorrect.

I can’t vouch for it all the way through, as I keep saying, but the idea of it? The idea at the heart of it is interesting, and it’s worth playing, even if you just play it to think about it.

Lords knows I’ve done a lot of thinking about it, considering.