Oink games are one of those companies I deeply appreciate in the same way most people appreciate art. They make beautiful, tightly integrated little games with a lovely visual aesthetic and a variety of play scales of difficulty, from a different cultural perspective than I’m from and they satisfy a variety of different play types.

But they’re also extremely pricey to get my hands on here, because I don’t know, we have a nice beaches tax, whatever. Attempts to buy Oink games tend to be kind of happenstance – you either see them for sale on a shelf and snap them up, or if you can’t, you deal with them being randomly unavailable. The internet, normal place I go to for this kind of thing, isn’t much help – shipping fees for Oink games can sometimes be as high as seventy dollars.

Still, these games are great and if you live in Europe, Japan, or America, they’re a lot more obtainable, and statistically you do, so I want to share with you a game of theirs that you can play yourself with just the bits and pieces you already have access to, and hopefully it’ll encourage you to check out their other stuff and give you something you can do at a family party this holiday season that doesn’t involve again, monopoly.

… is this going to be another drawing game? 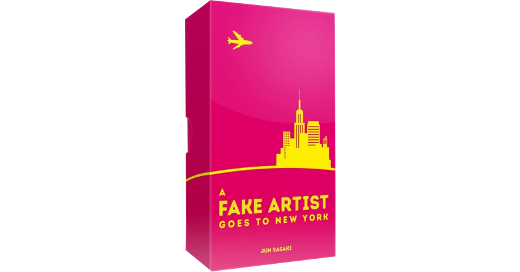 Okay, unfortunately, yes, but I promise it’s not the same thing and it’s really good! A Fake Artist Goes To New York is a drawing game where rather than everyone needing their own pad of paper, you instead need one pad of paper, and some scraps of paper and markers.

The thing with this game, and what separates it from Fax Machine, is that it’s a game where you don’t have to be good at drawing to win or lose. You’re adding one line at a time to your drawing, and that means that you don’t really have a luxury of being good or bad. Much like how I spoke of Poker earlier this year, it’s not a game of expressing your skill as an artist as much as it is a game about communicating with the other players. You’re trying to find the fake, and the fake is trying to make sure other players don’t catch them out.

This game is lovely and charming, and I recommend you don’t just check it out, but try playing it. But didn’t I say it costs a bunch? Well, you don’t need to buy it to play it.

You don’t need specialised equipment to play this game, you just need the rules, which I won’t explain in full, because I don’t have to. You can get them here at BoardgameGeek, hosted there with permission by Oink Games. This is a really impressive move, by the way, because the rulebook covers how you pretty much don’t need to buy the game. They’re giving a version of their game away for free, understanding that if you like it, you might buy it. I really respect that, especially in a game that’s so approachable and can serve as a gateway to get people into the games scene.