Typically when these edition conversations come up, I come at it with a certain kind of defensiveness. This is in part conciliatory – after all, I don’t think the conversation is useful if it’s about whether or not you should play 5e or 4e (or 3e, or Pathfinder, or whatever). It’s not useful, because I have a straightforward answer that I think 4e is better than all of those other games, and I don’t care about hearing about those other games at all.

I know, it’s so unreasonable of me. I just don’t care.

Nonetheless, I often get asked afterwards, ‘hey, would you suggest I try 4e?’ and I usually say something to the effect of ‘hey, I don’t know, why not.’ This is in part because organising a tabletop game is a big pain in the ass. If I’m suggesting you branch out, is it really best to suggest you start by trying 4e, when there’s other, less difficult games to get rolling on, that will broaden your palate and give you a better appreciation for more games, and maybe even give some money to a deserving soul. Is it better to suggest you try 4e D&D than try Dog Bear or Brinkwood or Monster of the Week?

But let’s set that aside for now. Let’s assume you’re curious about a D&D game and are deciding between your options. Alright then, quick and dirty, here’s five reasons why you should try 4ed:

Perhaps thanks to its reputation and perhaps thanks to being a ‘dead’ game, 4th Edition D&D’s core rulebooks can be had for $10 each in pdf form, giving you a total of $30 to get started. The 5th edition Player’s Handbook is $50, and isn’t even all the resources you’ll need. You could buy the 3.5 PHB for the same $10, but I will point out, that game is really bad and falls apart when you look at it too hard. 4e, on the other hand, works, and that’s what we’re talking about here, geeze.

Hey, do you like homework? I don’t like homework. Other editions of D&D are set in settings with really specific tones and rules about how the world works, so if you make a character thinking about their flavour first, you have to double check rules to see if that’s true. This can be a real pain in the ass if you want to play something like a cleric or a druid and need to know how magic and your powers interact with your worldview.

4ed D&D doesn’t do that! There’s no pre-established setting you have to learn about while you’re just finding your feet. The world could be dense and rich in lore, it could be an existing story space you like, you could just use it to jam in another setting if you want, because it’s mainly concerned with making sure things work and not being too fussed about how. 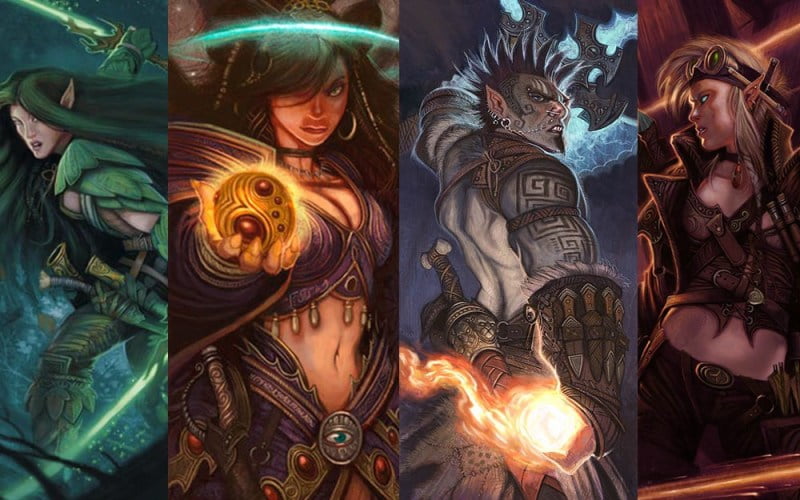 The 4ed resource set is one where the biggest complaint people have about its primary mechanical axis (the miniatures and tabletop space) is stuff that a lot of online tabletop spaces already cover. If you use Roll20 or Tabletop Simulator to run your game, you won’t need to do anything fancy to get the resources required to set up or play, because all those assets are easily googled and slapped on the tabletop  conveniently.

This means that if you have a problem with getting players to the table, like people have commitments at home and the like, maybe you have a slot in your normal gaming group for a 4e game that lives in those downtime weeks.

Combat in Dungeons and Dragons games is pretty slow, no matter what; there’s always some friction lost to checking initiative and turns and the round of the combat it’s in, and people considering their options and that’s just there. 4ed D&D combat is still about as slow as the editions around it, but 4ed does what it can to push that friction down.

When you’re making characters, roles let players stay out of each other’s ways and when you’re playing, roles let you get a clear idea of what your allies might need. What’s more, it’s pretty easy to make a character who, at level 1 works pretty much fine, and all your standard stuff you need to do your character’s job is guaranteed.

The 4ed encounter builder is so robust that you can literally pick monsters at random, and there are even online resources to do that for you, and you will have your encounters pretty much put together. You can even use this to give you an explanation for the session – these four random monsters are in this level 1 encounter? Okay, why are they working together?

The back end of 4e D&D is really, really solid. If you’ve never run a game and want to try it out, 4e D&D is one of the systems that I hold out as a system that knows it has to explain things to you when you get started, and it puts good, useful tools in your hand.