I’ve talked on twitter about how the anime Bleach (a good?? anime?) wasn’t just culturally important the way that, say, wallet chains were back in the 90s, but how the series, even up to its waning edge, was capable of influencing charts throughout its entire eight year run. If your band made an Ending Theme for Bleach, you were probably going to be a top 50 hit (with only one or two falling lower than that), and if you made an Opening Theme, you were pretty much guaranteed a top ten spot for at least a few weeks.

Now, you can make the case that the Japanese charts are more mercurial, or novelty driven, or maybe made of cheese, I don’t know and I do not pretend to know. What I do know is that this is a charted statistic that someone has organised, and that means I can sort it and that means I can put things in contrast with one another and have opinions. 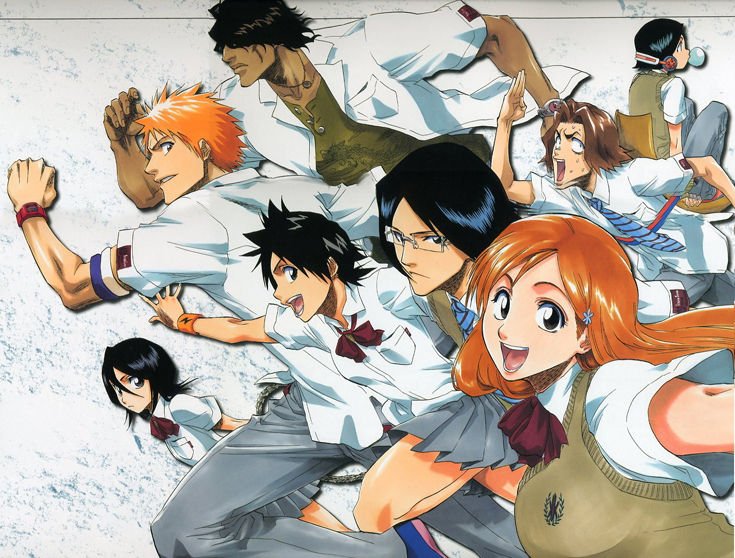 Here then, are five of those songs that I think you, an assumed non-Bleach-watcher, should check out, because I like them and this is an excuse to talk about them. Am I going to look at them in their relationship to cultural attention? Well, I could, but that sounds hard. Instead I’m just going to bring up five of them and see how my brain meat feels about that after I’m done.

This one wasn’t an OP or an ED and far as I know it wasn’t anything particularly popular. This was off the Bleach Beat Collective, one of a number of releases of image songs, songs where the characters were meant to be the ones singing them. This is a really common thing in anime.

Hand on the table, I think character image songs are really cool! They’re a kind of storytelling that can focus on things like the really specific feelings of an individual character. Sure, we can hear Mr Big express what it means to be the one to be with you, but imagine if we were hearing that from a character that’s actually interesting and also fights giant robots.

Anyway, We is a song of the four major characters and perhaps over-exposed 11th Squad crew, Yachiru, Ikkaku, Yumichika, and of course, the big man himself Kenpachi Zaraki, singing about how great it is to be friends.

Who also murder people? I think?

I like this song in no small part because it’s clear these voice actors are having a blast playing these characters. Particularly of note, Zaraki is voiced by Fumiko Tachiki, a famously deep, gravel-voiced jazz singer and seiyuu, and also the former voice of Gendo Ikari. He’s also the voice of the Gaia Memories from Kamen Rider W.

There are times you may see me teasingly mock certain types of fandom enagement, such as the propensity of people to overvalue the quality of a bad story with attractive characters in it, with ‘girl hot.’ Well, Shojo S is the ‘Girl Hot’ of Bleach openings. The song is fun and upbeat, and I like it a lot, but gosh, this opening.

The opening is basically two characters who aren’t meaningfully related to one another dancing in a way that doesn’t meaningfully express their characters, turning the characters into props, and then including a third character who… again, is just here because Girl Hot. What’s more, it uses some form of motion capture or maybe rotoscoping to make the animation very different to normal animation in the series, which stands out, but it seems to stand out for no purpose, but for

Still, Scandal made a few songs for Bleach and they’re consistently good, so check those out.

When Fox and I were talking about this short list, we had to acknowledge that this is a properly great song. It’s got a good tone to it, it buids up nicely, and the opening even works it well with the style of Kon’s body.

What makes this galling is that it includes the backpacks, a set of filler characters that are essentially literally and obviously merchandising opportunities. The point in the anime is the Journey To Hueco Mundo (the first time that Bleach attempted to jump back on its bicycle). This is really one of the first times Bleach took a hard hit in quality, because post-filler arc, we were convinced ‘hey, maybe it’ll improve now it’s back on the main plot,’ and oh hey how about that, it didn’t, and we still had these fucking backpacks around like they weren’t being properly cleaned up and disposed of in the filler arc.

Still, it’s a good song and I like how it doesn’t feel inappropriate to have it being diegetically sung by the melodramatic Kon.

Oh wow, I forgot how good this series made me feel when it felt good.

When you present people games, you are giving them a creative space. Sometimes the most basic form of creative experience is ‘I could imagine myself doing a good version of that,’ in card and board games. In Tabletop RPGs, factions often serve the job here – you can imagine how you’d react to or interact with them.

In the Soul Society Arc of Bleach, the endings each showed one of the thirteen factions of the Gotei 13, were uniquely animated, showed you the characters in that faction, a bit of who they were, how they related to one another and the song fucking slaps.

I still can remember words of this chorus. There was a point where Fox and I could sing along with this song. She still can, I can’t. What’s neat about this one, showing the 2nd division with Soi Fon in it, is you see her fighting that black lady? That’s Yoruichi, a character who had been in the series for nearly a dozen episodes by this point, but who had been only seen as a small black cat. This meant we spent time seeing this character and promotional art of her going wait who’s the really hot lady and what’s her beef with this captain and--

It was really cool. And again: The song fucking slaps.

It’s kinda surreal to think that this song is fifteen years old and was only used for Bleach for less than a year. One season! That’s all it got! And that season was focused on a very different story to what Bleach was, with ideas like a cheating TV medium and helping people avoid the ghost of serial killers hiding in a parrot.

When this series was weird and about belonging to things it was really good. Ichigo struggling to try and get by as this sort of high schooler supernatural detective who occasionally fought a godzilla? that ruled.

Asterisk is the highest charting Bleach song, and it’s probably still regarded by many to be the best. The opening does a ton with it, too, even having the silhouettes of the characters react to the music, suddenly putting them as voices of the dialogue, and that’s really cool. The song itself is just really solid, though, and sure, it’s 2005 J-hiphop, but it’s really good at it.