This month, I was able to finally get out a Project Sheet for You All Meet In An Inn, a game I want people to know about and hopefully I’ll be able to build enthusiasm for, or find people who want to contribute character art for it. I also put out my long-standing beef about TVTropes Criticism, and did an analysis of Eduardo Baraf’s clever card game Murder of Crows. There was also an intimate piece examining my relationship to my abusive grandmother, and I dug into my feelings about writing a smooch boy in Moon Light Moon Knight, which you should go read.

What I found this month was that writing the Story and Game Pile entries was really hard. I had to dig pretty deep to find Smooch movies that weren’t really gross, or misdirected. I watched a lot of movies that felt like they should be good romance movies, and they were overwhelmingly focused on awful dudes, misogynist behaviour, or general creepiness. What’s more, playing through Hustle Cat was a really rough experience because for all that I felt like the game was really good, I found myself feeling like I didn’t belong in the spaces I cared about.

At the same time, though, DoraKane and The Blind Griffin made me really happy, and I really enjoyed Love is Strange, but there was always in my mind, a reminder that there was a clear reason that my choices had wound up being mostly lesbian games. There just isn’t a lot of smooch media with dudes in it who aren’t utterly garbage people.

And speaking of lesbian games,

This month’s video was on Love Is Strange, a visual novel that represented a bit of a new kind of problem for me. At first I wanted to do a lets play of one route of Love is Strange while doing all sorts of interpretation/long form talking about the ideas presented in the game. Problem is, Renpy and OBS don’t interact, and trying to route around the problem was really hard.

With that idea dead, I thought I’d like to do something a bit shorter (to be easier to make) and maybe juxtapose Love is Strange with Life is Strange. What I wound up making was basically an example of how a Game Pile looks when it’s a videogame where I don’t have a lot to say. It even wound up being largely about Life is Strange, because Love is Strange is a ten minute game that’s very easy to finish, so talking about what’s in that game is almost like depriving you of a small amount of content to start with.

Then because gameplay footage of Love is Strange is pretty low-key, and I didn’t want to mangle text boxes or stretch sprites, the Love is Strange video is mostly made up of slow cuts over the spaces of the game, with occasional drop-ins of other images. While I like it, I almost wish I’d used fewer images, and gone slower, to make it less likely you’d feel you were ‘expecting’ something to happen. I feel like the video is a bit empty, but these are why we take stock of our lessons.

Lessons learned making this video: Timing pauses is hard. Background music is valuable for giving some more pacing. A slow pan over a single graphic is fine, and frenetic jumpy jokes aren’t actually helpful at this point.

Originally, I was going to release a Bloodborne themed shirt this month! But as I worked on Smooch Month projects, I felt that it was a disservice to the concept. I went back to the drawing board and wanted to make something that was just a bit more celebratory of smoochy concepts. 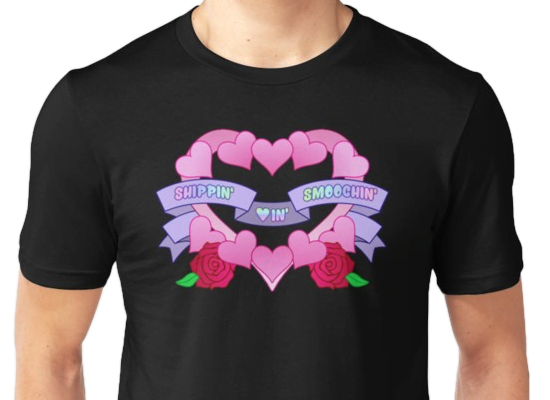 You can get this design on Redbubble and Teepublic.

Gosh, what’s happened in February for making games? Well, over on my Patreon, I released the alpha playtest model of a game design I came up with while working table at CanCon. I’ll be showing some of that card art as it’s progressing, and there’s peeks at how this game will look on twitter.

Here’s hoping I don’t revise this later saying OH GOD EVERYTHING IS HORRIBLE.