When I sat down to play Hollow Knight it was a really comforting experience, something I did because I knew  I wanted to make a video, and I didn’t have the energy or mental effort to do a lot of editing. I played a bunch of Hollow Knight for that video, checked out how it looked, then went off to CanCon. When I got back, I played a little bit more Hollow Knight, then I took a little bit of a break. There was work that needed doing, so I didn’t play any videogames for a week or so. 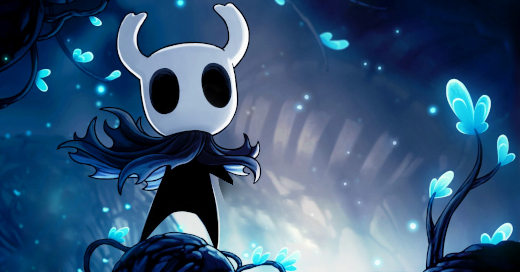 Then when I came back, and I want to make it clear, I was not far into Hollow Knight, I didn’t know what I was doing. Oh, the skills for combat were all there after a few moments of poking buttons. But the interface obscurity, the difficulty of working out what the map was doing, trying to find the path onwards, losing resources in trying to recover what happened…

Exploration games are really popular amongst people who talk about games, stories, and storytelling via games. They’re kind of a beloved genre, and they do all these things that can make them feel more serious and more cinematic, or, you know, just that vague ‘better-er’ than games that don’t do those things. The experience melts into itself, so the sequence of the narrative needs to be reconstructed, and so many of these exploration games get to make you feel clever as you explore the game more, as you understand more. They also tend to be cryptic, without a specifically stated, clearly outlined narrative – it’s really easy to make things ambiguous when the play experience pulls you along, after all.

Time to time a new game will come out that does this. It’s a little understructured, it’s engaging in a way that keeps you going, without any chapter breaks or typical, clear direction. Horizon Zero Dawn and Dark Souls were both held up as examples of this type, where reviewers rhapsodied about how great it was that these games didn’t ‘hold your hand.’

These are people whose jobs involve being able to play the same game for sixteen hours and needing to stay engaged for the whole process. I, on the other hand, need to sometimes break from games sharply and immediately. Sometimes I need to take four or five day breaks from games to complete work tasks. Sometimes, I need to re-engage with a game because another project requires my attention, or I need something I can share or collaborate on.