Hey, you know the Exodus of the Israelites? I have this thing about that and poop-

(Hang on, is it Passover today? It is? Uhhh… Maybe read this next week)

Okay, so you know the story of the Exodus of the Israelites?

Okay, so you’re familiar with the idea that at some point there’s a story about a bunch of Israelites, who left Egypt. Now, this story is made up. Sorry. It just didn’t happen. It didn’t happen, because part of the story involved transforming snakes, multi-day celestial events, and a mind controlling god that explicitly extended the days of slavery rather than magically teleporting all his (and they were his) people out of their situation. The lord, as always, works in slow, inefficient, fictional and breathtakingly cruel ways.

Now, the thing about poop is – 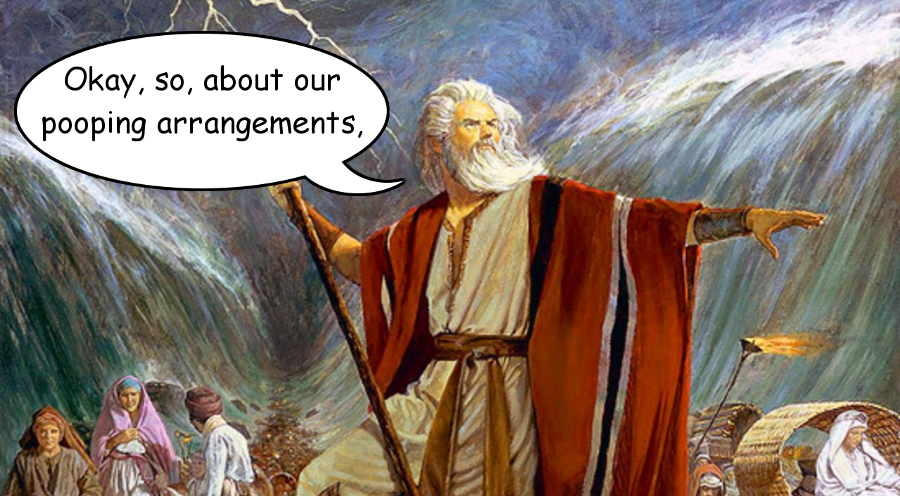 Point is, this story didn’t happen, but the book it’s in gives us some statistics for what happened. They claim that 600,000 Israelites walked out of Egypt, with their cattle and their goods, and their families, women and children and all that stuff. The conservative estimates, by Christian Scholars, which I need to underscore is something of a parody of a title, are that the 600,000 men were roughly a quarter of the population of Israelites, so simple little math says that’s 2.4 million people.

Now, this is the kind of thing you never want to do in your fantasy novel, because definite numbers let you do all kinds of fun silly things. For example, two point four million people occupy a certain amount of physical space, and that means that – again, ignoring the livestock, because who can know how much volume they have and they had to be enough to support two point four million people on the move and some estimates put the number of herding animals to sustain a family as being about five, so, you know, five million or so cows or –

I’m getting distracted, from the poop.

Thing is when you have numbers, you can do fun things like work out what kind of space they occupy. A basic rule of thumb is that your personal space is a little bit smaller than your arms’ reach while you’re walking, and that means that if you wanted to put these people in a line, on average, that line would naturally form a queue four thousand kilometers long, which is to say, about the distance from New York City to Los Angeles. A line of people literally as long as the United States. That’s pretty long! That’s a lot of people.

Now obviously, you’re not going to actually walk in one long line, but that’s still the kind of scope of human presence we’re talking about. Creationists like to claim the Red Sea was only 9 miles across at the point the Israelites definitely actually crossed it (which they did not, because again, this is a made-up story), this grouping of 2.4 million people would have to hypothetically, move across that kind of distance in a reasonable fashion. What if we say that our line of people was 14 km long, so the last person to start the crossing started it as the first person to start it left? That seems reasonable – you don’t want to keep this thing going too long, it’s like a traffic stop.

Anyway, if you do that, the ‘line’ of people is about 14 kilometers ‘long’ – but it’s 273,000 kilometers across, which is, uh, ten times longer than the Red Sea is, itself! That’s a bit weird, isn’t it? Seems like they might have remarked on that, and the Exodus is often presented as a long, snaking line following a column of fire. If we work with this idea, we can generously say this front face is say, half a kilometer across, and uh, that 2.4 million people forms a trail of people about 4,800 kilometers long. The art depicting it does tend to work with this idea – a huge sprawling spread of people in a long, snaking line.

The thing is, that many people have infrastructural needs. They need to get water that they can drink and food – but a Miracle happens after some time on the road, and God gives the manna, miracle bread that falls out of the sky (which, you know, is more proof this definitely didn’t happen). Those needs, by the way, are normally met in a city. A city I bring up because, two and a half million people is – well, it’s a mobile city. A mobile modern city. We’re talking at this point about the population of Houston on the move!

Volumes of cities is also funny, because as it stands, a million people is a huge number to have in a city, even now. There are lots of cities with more than a million people in them, but that’s now, in the 21st century. In historical record, a million people is really rare – the first time we have multiple historical sources claiming a city had a million residents was Rome, and that was in 100 AD, after there had been some empire, and some sewage and stuff. At the time the Exodus supposedly happened, the city of Avaris, in Egypt, was one of the largest cities we could find any record of (which suggests it’s one of the biggest in the world at the time), and it had a population of 100,000.

What that means is that this 600,000 number – even if it was just there on its own – represents six times the largest city in the world at the supposed time it was set. That’s a historical detail, you might imagine, that you’d get wrong if you couldn’t do any research as to the history of your supposed historical date a thousand years before when you wrote things down. 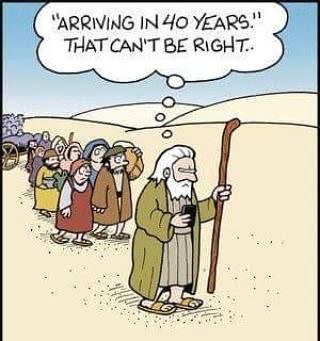 We’re there, finally. We have a nation of two point four million people, wandering around a desert, and those people are going to poop. A typical person generates about 450 grams, per person, per day, or about a million kilos of poop. A day. This is probably done by moving out of the flow of traffic and dooking by the roadside, then getting back into the flow of population, or something like that. Or maybe it’s stored the whole journey and done at the end.

Now, a typical person moves at a rate of around 3 km/hour, when you’re transporting a bunch of junk, and probably moved for around 14 hours of the day, so the people at the front of the crowd moved about 42 kilometers every day. I want you to bring to mind this image of a queue of people, stretching a thousand kilometers into the distance, and you, in the back, are walking past everyone’s dumped poop. For years.

This is very silly.

All of this is to just say, here’s some writing advice. Pay attention to the numbers you’re giving. You don’t need to offer real numbers, you don’t need to tell people something like the actual volume of grain. People don’t usually talk about those things personally, so giving those precise details open your fantasy story up to being ridiculed as it shows your lack of a sense of scale.