If you’re bothered by seeing designers scrutinise other designer’s designs explicitly to change them then you might want to check out now. I personally advocate for this practice very hard, since it’s both important to demistify the lie that games spring out of the aether, but I know that some people are both more precious and more sensitive to the idea of ‘idea theft.’ Since I put a ton of my design work out there on this blog, you can probably guess that I don’t have that same fear.

This is an examination of how a game can give you ideas for another game, it’s not about things the designers ‘should’ have done, or things that they should have presciently known better about. 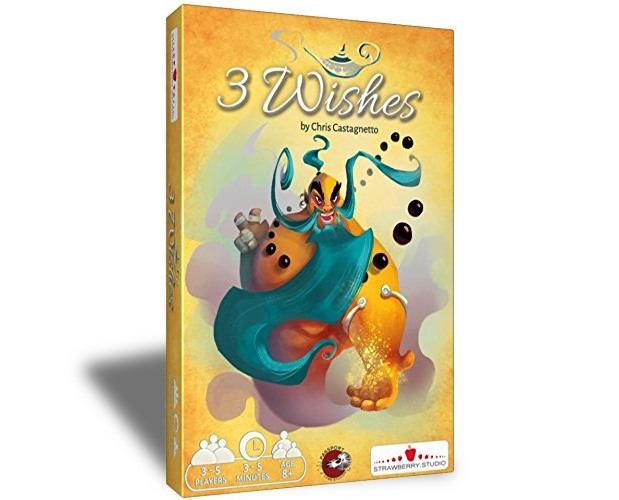 This is a 2016 card game by Chris Castagnetto and Magdalena Markowska. To be totally honest, I have beef with this game straight out of the box, or rather, from the box the game is in. This game is about 23 cards, and of those cards, five of them are reference cards and one of them doesn’t seem to serve any purpose at all. It comes in a box big enough for a game with four times as many cards, which annoys me just a little bit.

There’s a reason games are packaged like this, though. There’s a relationship between how big a game’s box is vs how much people think that game ‘should’ cost. Sad truth, but there are players who balk at my small, $10 games, despite the fact those games provide a lot of play and fun, and are complex and interesting, because they’re small and come in a transparent plastic box. While 3 Wishes’ box bothers me, it’s a decision made with a purpose.

This game is about assembling a set of three types of card with the highest aggregate score you can. To make this more complicated, the cards are all face-down and players have to take actions to look at the cards, rather than getting to do that freely. This introduces an element of inference to the game – you may have to make your decisions for what a card could be based on the other players’ interactions with it. 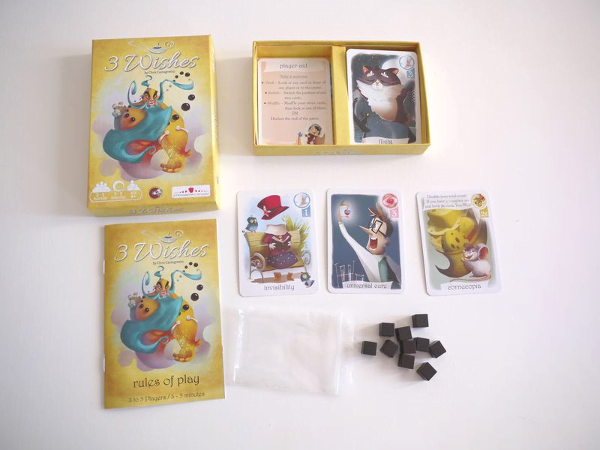 The game builds itself around a pretty simple puzzle – can you assemble 3 pieces without being sure of what they are? How much time do you want to spend checking your hand to make sure you’re okay to end the game, and how afraid are you of what’s potentially going to go wrong?

I like the engine of this game more than I like the game itself. Not that the game is bad, I just have a lot of access to this kind of microgame, and they tend to appeal to me on the basis of their theme or how easy they are to share. Playing with my nephews means that games that require people to lie or bluff or track hidden information get to the table less often. That core game, though is a nice little idea – can you assemble a set of 3 without looking at the things you’re assembling too much?

The game doesn’t have the same communication as poker does, which means bluffing doesn’t really work the way you think it does in poker, too. Poker, there’s a lot of action to read into, and you play dozens of poker hands with the same players. In this game, you only have a tiny window of time of play to work with and you can just be dogged by bad draws rather than some intention to manipulate the other. What’s more, there’s no way for your bluffing to convince other people to back down – all it can do is maybe steal a little time, rather than a win.

Since I saw it I’ve been working on using an engine inspired by this one.

My idea is that of a game where you are still trying to assemble that same 3-set. In my case, my theme isn’t preposterous impossible wishes, but is instead trying to pull off a heist, because I like heists. In this case, your heist needs a setup, a payoff, and an escape route, an A-B-C design. 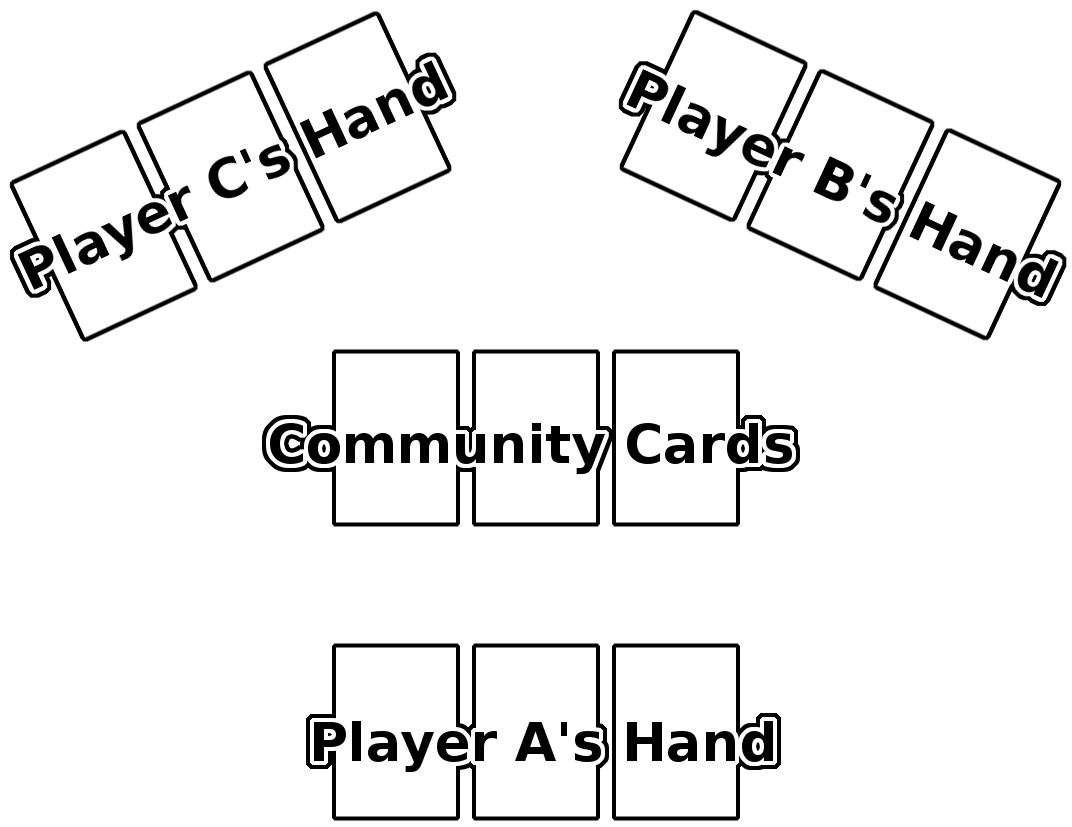 The idea wants some refinement, but one thing I like about 3 Wishes and this one is that after a certain point, players have the luxury of firing the game off. One thing I don’t like so much about 3 Wishes is the way the game wants to be a closed system of a small number of cards, then makes getting rid of those cards the task of setup.

In 3 wishes, a player can swap cards from anywhere to anywhere. In this build, I think I want to keep the community cards separate. I’m also toying with a way to keep cards cycling out of the Community zone, and maybe therefore to put forced conclusion to the game. That’s going to need a test though, because I want to make sure that the game doesn’t end regularly with nobody winning.