I’ve commented on Dishonored, both entries of its DLC, and its Sequel in the past. It’s a franchise I’m comfortable calling one of my favourites. Now, here we are, at the final entry for this place, a final journey to the Kaldwin Era of Dunwall, and it is with joy and sadness, I return once more, to get to the root cause of all this chaos anew…

There’s a nonzero percent of the population for whom Dishonored is and will always have been some form of a sort of indulgent goof-off simulator. A purely mechanical play space, a game big enough to give you the experience of an open world with enough specifically and carefully constructed pieces to not feel the same procedurally generic way that those games tended to. For those people, the most important question of Death of the Outsider, in your generic ‘is it good/will I like it’ hinges on how the game reuses mechanics, and how it iterates on those mechanics. Is this game to Dishonored 2 as Knife of Dunwall was to Dishonored 1, or is it a bit more Dunwall Trials?

Well, the mechanics are both less expansive than Dishonored 2; many of the mechanisms in 2 were quietly kicked out of this game, so if you were one of the people who favoured renewable resources in the form of Outsider powers, well, you only get three to play with. On the other hand, those powers are a lot deeper than the original ones. 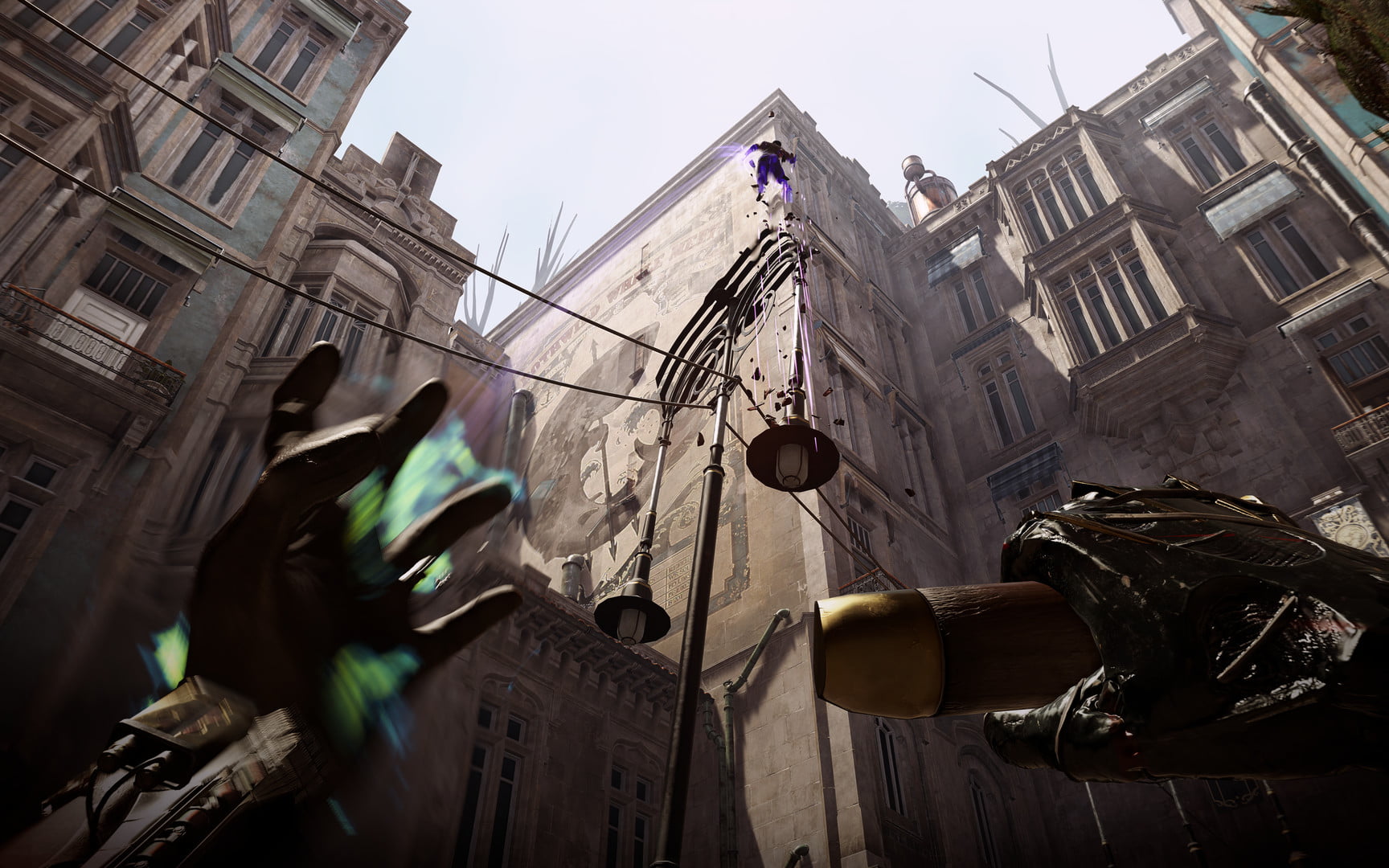 There’s also something to do with the weapons but I’m not going to lie to you: I didn’t care. I’m not that kind of Dishonored player. I couldn’t tell you half of how the weapons work because if weapons are involved, I have clearly hecked up.

Death of the Outsider is five levels long, and those maps are – they’re not reused, but they have similar territory, meaning it can feel a bit like you’re moving around in circles. I don’t consider this a dealbreaker, but there’s a certain tiresome chore of a person who considers the idea of a reused asset as a violation on the part of the game developers.

Anyway, mechanically speaking you’re dealing with a game that could be defined, at worst as More Dishonored 2, which for my tastes, even if I didn’t like Death of the Outsiders, would still be a fun enough experience. It’s got some mechanical flaws though and weirdly, the most important one, to me, is the game seems to lack a Clean Hands achievement. 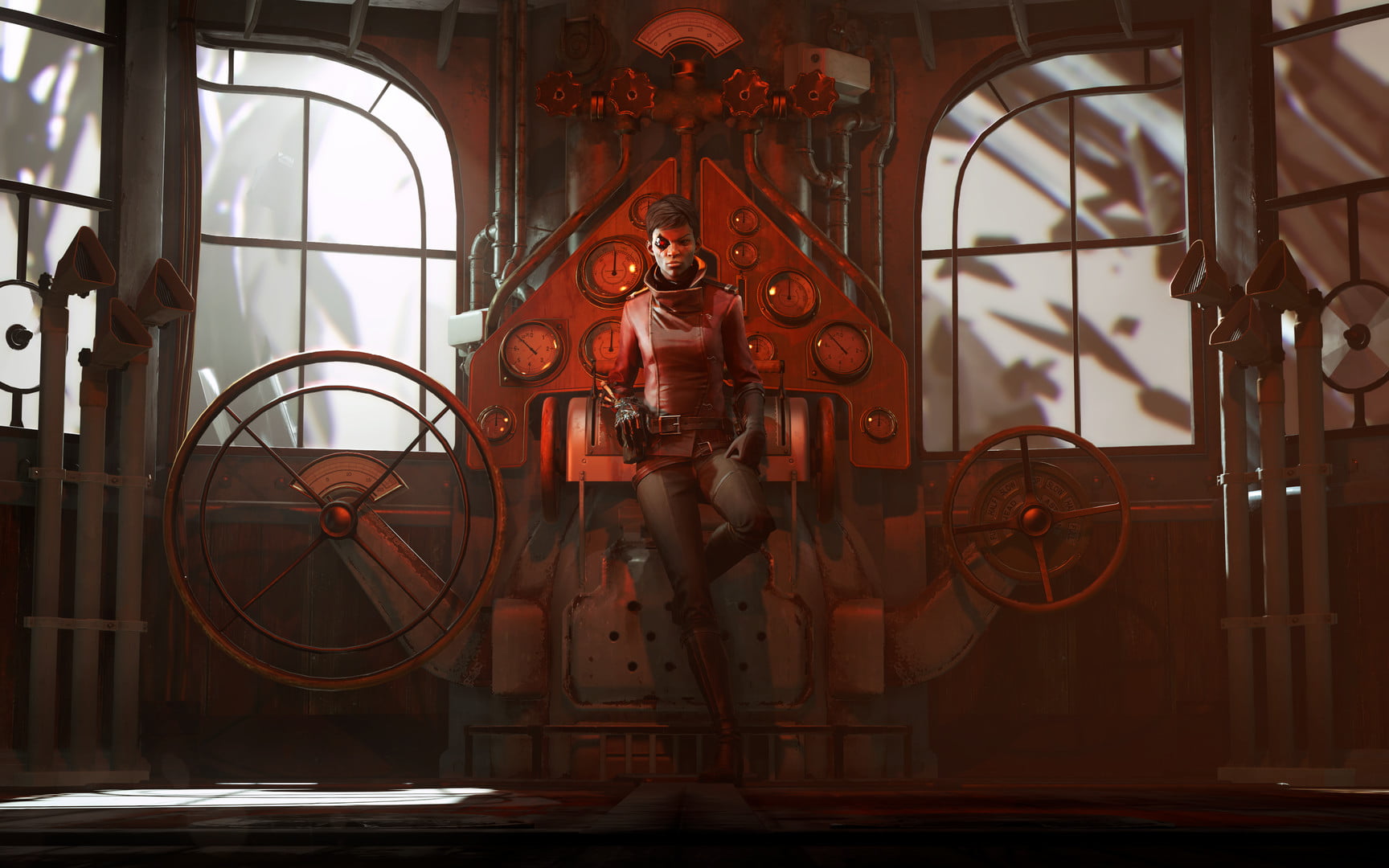 The game doesn’t have a chaos system in it. It stands to reason – the story takes place over a shorter window of time, and also, you’re removing the Outsider from the story, one way or another, and that means that you’re probably going to have a big impact on the world no matter how you want to cut it.

Broadly speaking, it’s a success of a game – it still feels and plays like Dishonored. I still like it, the fluid feeling of stealth and fast-moving use of special powers to break the expected rules of guard behaviour. It’s still good. Yet at the same time, if I had to choose between this game and Knife of Dunwall, I’d play them, not this.

Death of the Outsider is a little smaller, and a little less tight. The achievement system includes specific incidents and events but it still mixes together stealth achievements with combat achievements. It’s not a major thing, really, but it did mean that when the time came for me to proceed with the game, when I looked at the acheivements after I was done with the game, I felt no urge to play more.

So: Pure mechanical exercise, it’s a level pack with a few interesting twists, but nothing as good or as interesting as Dishonored 2.

I’ve made fun of Blizzard games – I know, they have nothing to do with this, bear with me – in the past for having basically one plot arc they’re ever comfortable doing, the story where a seemingly-noble character with a fatal flaw encounters something that turns them Blatantly Evil, then at the last minute the Blatantly Evil juice leaves them and they die a hero, oh so tragic, oh so sad. It’s pretty reliable to see this in almost every part of Blizzard’s work, both big and small and it’s not really fair of me for teasing them about having a story trope because it’s not like other media is trope-free. For example, Dishonored has five iterations on the same basic plot: A Dad who doesn’t communicate well leads to a extremely complicated situation around a Daughter, who then needs help for the situation to be un-ruined.

This is simplification, of course; there are some interesting recurrent themes in Dishonored, particularly the empowerment of and uplifting of women in patriarchal societies. The first game fumbled, perhaps, in the way Emily and Jessamine were reduced to objects in the first game or the callous disregard that first narrative had for the fate of Lady Boyle. In the next story, Billie Lurk stepped forwards and the story turned around Delilah Copperspoon, showing the way that women when deprived of power will do what they can to take it. Then the Brigmore Witches concluded with Daud struggling to save one woman from another, Delilah willing to kill Emily if it let her escape being Delilah. With Dishonored 2 we’re presented with progression that shows a canon: That Emily learned from a moral but too-cautious Corvo, that she tried to rule well, but was too focused on small, personal scope situations she could solve herself and let delegated tasks fall into disrepair. What then follows here, in the finale of the series and possibly the franchise, is Billie Lurk, resurfacing once again, to make good on the lessons from her father. 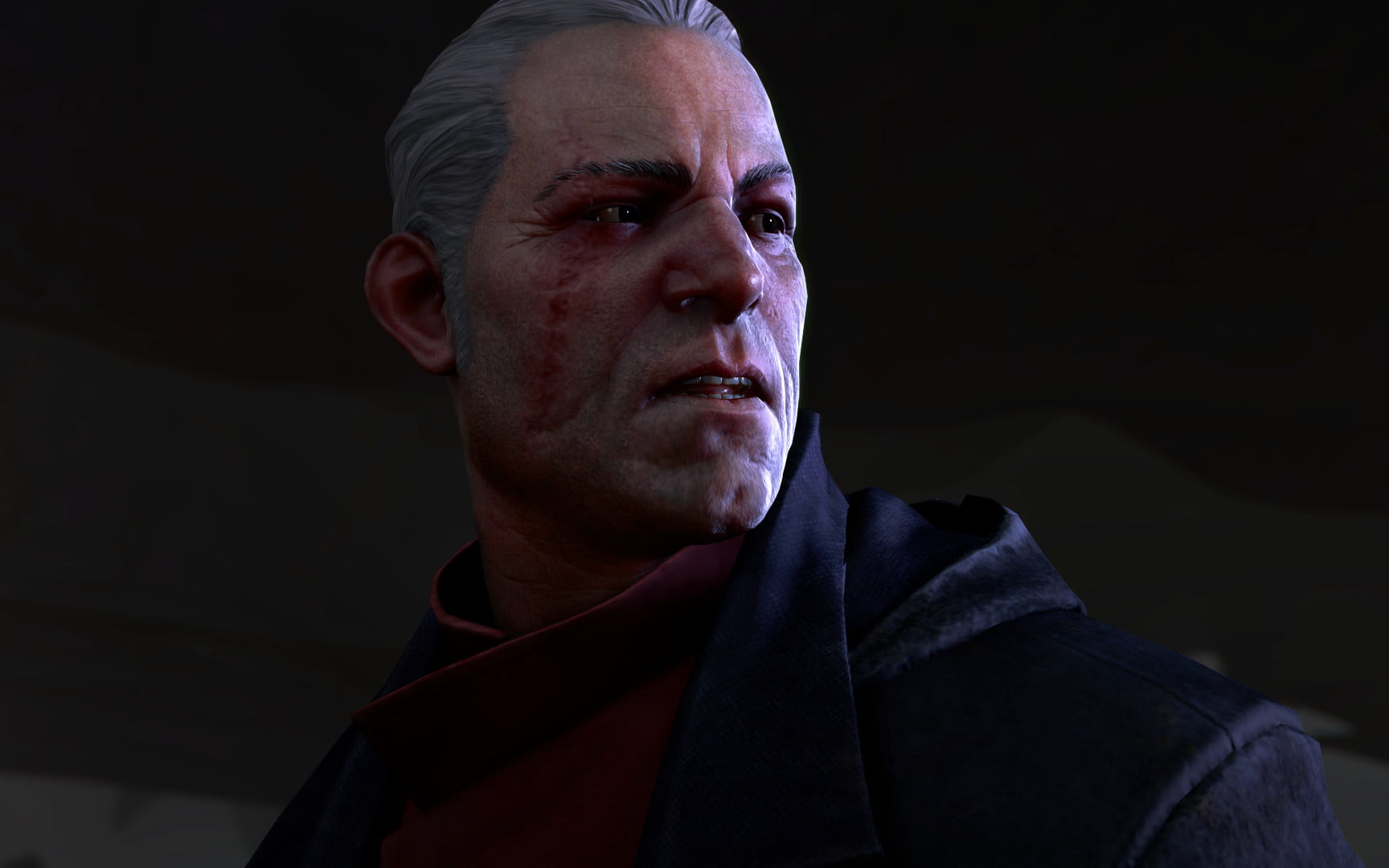 There’s nothing in this game that calls Daud a father, but it’s pretty clear that’s the symbolism they’re going for; without going into spoilers, Billie’s relationship to Daud passes a final point, and there’s definitely some talk about ways they’ve influenced each other, their closeness, their love for one another and their forgiveness of one another. It is a sad story, a story full of endings, and finales, fittingly given its name, and it is a story that deliberately positions itself after many other endings.

The arc is a classic crime story; you start by rescuing a friend who got in too deep with a bad crowd, then you case the joint, pull of a heist at a bank, find your mark and finally strike at the target. Really, you could make a case that any future Dunwall games should just follow this pattern four or five times and in no particular order and you’d have a good basis for a narrative-light assassination game. 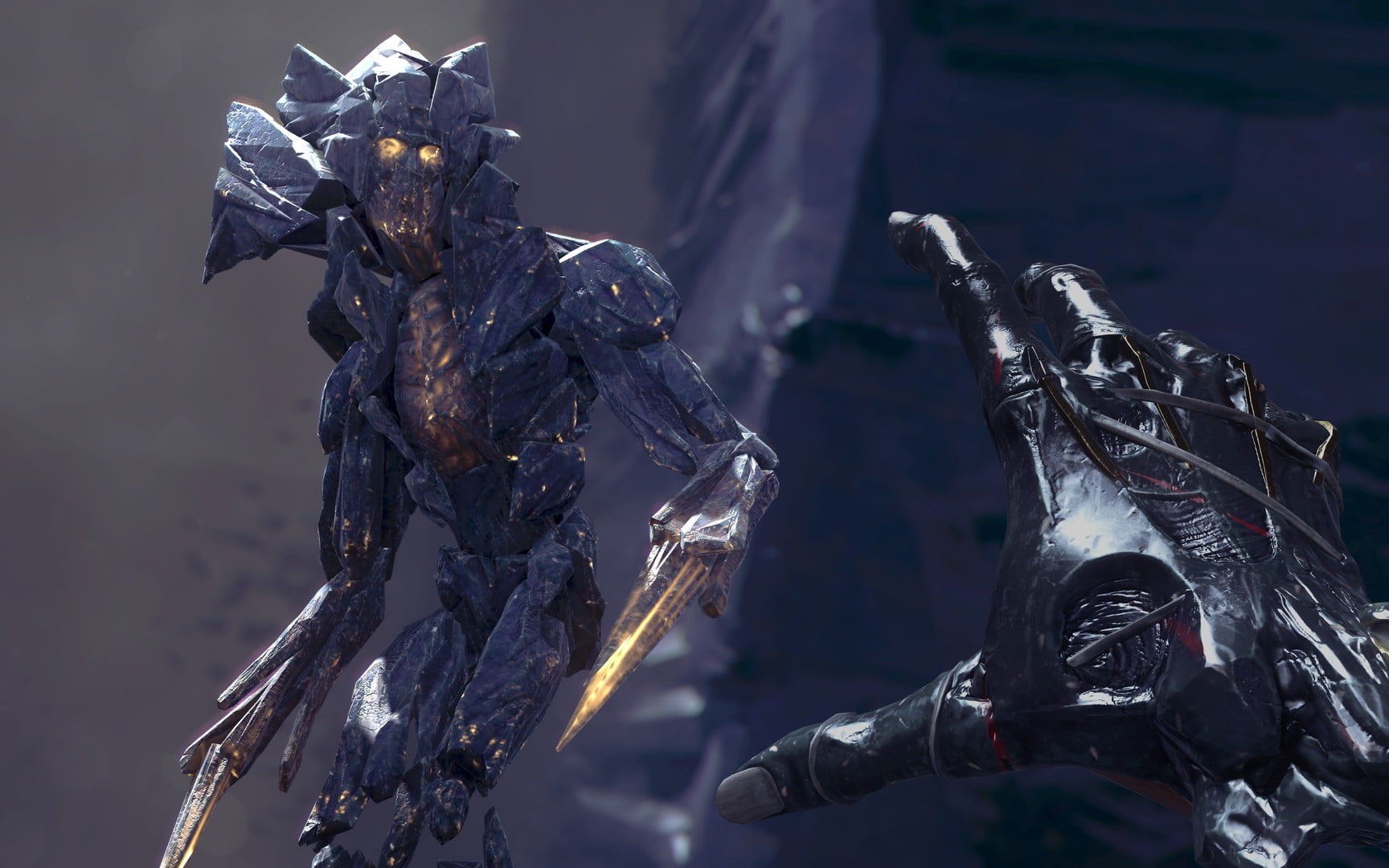 Also this after-the-end narrative means there are stories we see referenced but never explained. The game doesn’t need to tell us much about Deirdre, beyond that she matters a great deal to Billie. It doesn’t need to show what Billie thinks of Emily’s work, because it’s not her focus. And throughout the game, you pick through the end of other people’s stories, listening to their worst moments or what they left behind, in sadness.

Perhaps that’s why this game had no other option but to go big with its final quandrary, a question of forgiveness and revenge that are both in their own ways, wholly justifiable. It doesn’t ask you to save the world in a grand spectacle, but asks you a deep question about what boundaries you are willing to put on how you treat other people.

It is a weighty game, a denoument for something that I cannot help but think of as deeply meaningful to me, and I will miss it.

You can get Death of the Outsider on Steam, and Humble.