Alright, so come with me on a journey.

While listening to Power Metal tracks on Youtube, which is definitely a thing a sensible human would do (because ad blockers work on Youtube and not on Spotify), I got treated to this fantastic bit of stompy Power Metal. Most of the bands I like in that genre are either ESL (like Korpiklaani or Sabaton), so there’s always a little bit of odd or weird phrasing, which meant that the actual boast of the song is a little… weird. Right? Diggy Diggy Hole.

Anyway, I liked the song and moved on with my life.

But then I got kinda bothered by the way that phrase sat in the head. Some other lyrics too – lines like suckled on a teat of stone, which isn’t a very natural ‘badass’ phrase you’d see in an English song. Being a context seeker, I figured well, Wind Rose might be an ESL group and this might be one of many Swedish power metal bands playing with dwarf fantasy stereotypes, because power metal bands love personae. And then I found that yes, Wind Rose are ESL – but not because they’re finnoscandian rock-busters.

Okay then so that seemed weird, ‘dwarf’ and ‘Italian’ don’t leap to mind together the same way, so I went looking further for the origin of this phrase diggy diggy hole. 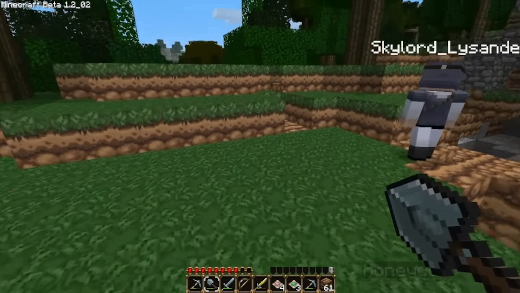 Back in 2011, a Minecraft Youtube channel called Yogscast (I am simplifying and do not care) had someone jokingly chirp the song “I am a dwarf and I’m digging a hole, diggy diggy hole.” It was a bit. It was a throwaway joke.

This being the internet, and a channel with several million internet subscribers, on the famously prolific and fan-productive Youtube, this song was then replicated by dozens of people, and then fans animated it, and then that song was now a song, and eventually, eventually, this found its way to my life.

What’s more, the song is pretty great! It’s got bombast, it’s got some guts behind it, and it sounds like dwarves should sound to me. But also, in this song there’s this one little snippet, one phrase that stands out to me.

Probably the single most iconic phrase of literature that relates to dwarves at all, in any media, is going to be Ian McKellan whispering, The Dwarves delved too greedily and too deep.

And this song says fuck you, Tolkein.