Custom dice are cool! They’re also expensive to manufacture. They also let you do weird things like have uneven roll pools? That’s neat. If you’ve ever seen the dice in Betrayal At House On The Hill you might know it’s got dice that are numbered 0, 0, 0, 1, 1 and 2 – that’s really mean!

You can do a lot with dice rollers! There’s the town builder Machi Koro, for a famous one, and there’s the set collector Yahtzee, a familiar roll-and-write. You could look at our own Cafe Romantica, where you build a collection of cards that react to the dice you roll. The thing with those games is that even though ‘these cards react to these numbers,’ and it actually works a lot like just flipping cards, by using a dice you can have multiple things respond to the same cause. There’s stuff you can do, it’s all interconnected, all fractal.

I’ve been thinking about this mechanic. Making custom dice is a bit expensive, but exploring an alternate way to do it resulted in me making a thing that I like as a possible space: 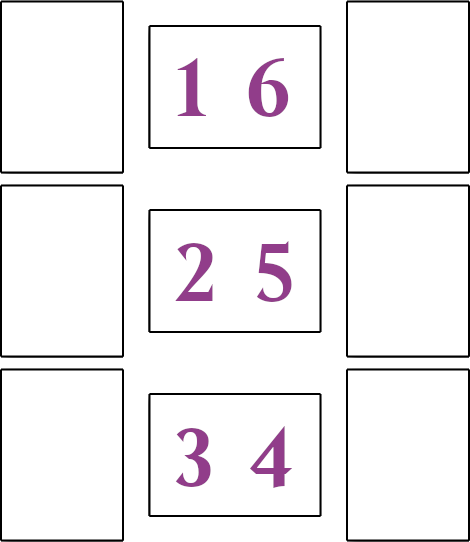 In this case, you play the game with a starting d6, maybe one for each player. They roll dice, and, then the numbers rolled result in the cards in those slots firing. It can be set up so that lots of cards are piled up on each number, so you can get lots of effects on single rolls and so on.

I want the building element of the game to take priority over the rolling though. That means whatever the design is, I probably want it so winning and losing isn’t about what the numbers rolled do, but is much more that dice limit your opportunities. We want winning and losing to be about choices you make in the last few turns, not about whether or not you rolled the Dead Dice.

I’m looking at this design and thinking of different flavours and different game sizes.

What I’m thining, looking at this prototype is that I want every player to roll dice at the same time, and then players select a number of dice – so you can ‘leave’ someone with dice that may or may not be appropriate to what they want.

I think there are two games in this engine – a smaller one and a larger one. The smallest one is probably a game that wants to focus on the potential viciousness of rolled dice, a meanspirited thing like You Can’t Win. The larger one wants to have more of a solid theme.

Just some notes and thoughts.