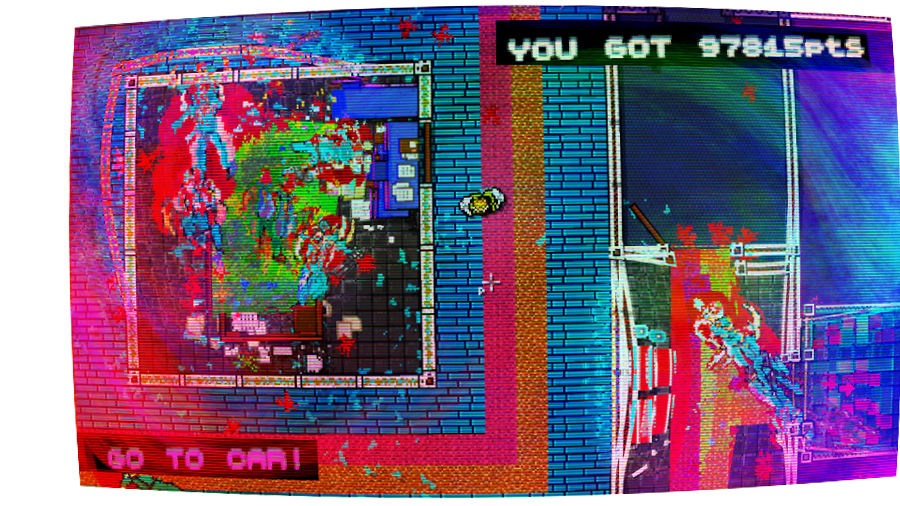 I dunno even where all the drug references come from. I don’t know why people seem to think that’s necessary. When you deal with drugs in Hotline Miami, they’re background details, crap on the floor. You see Jacket smoke a cigarette once, but not doing lines of white. There’s an arrival, a mask, and then… violence. Just raw violence. You see more people using the bathroom than you see doing drugs, but I don’t remember reviews making a point of it being ‘ablution fuelled rage.’ Hell, there’s an achievement for murdering someone on the toilet in a particular way.

I think that’s another part of the alienation of the conversation around Hotline Miami. There’s a conversation about the eighties someone else had, that I wasn’t present for. They look at how these characters behave and assume drugs had to be involved, perhaps? The nineteen eighties, excess, those two things together, surely that means drugs. Which always seems, to me, to be solving for a problem that doesn’t need solution.

I don’t think Jacket needs to be high to be Jacket.

The kind of rage that comes from having a game system worth more than a rent cheque that didn’t quite make you happy enough.

It uses the metaphor of anger at a game and turns it into the metaphor of the rage that comes from a place of genuinely wanting to hurt people. It wants to talk about the way that when you punch someone, really punch someone, you feel the bones in your hand creak. The way you grip something tight before you swing the punch because you want to drive hard into something soft and know that the person you hit won’t be able to hit back. It wants to give voice to a howl that comes from the black blood, it wants to make the people who pretend to be Jacket feel the rage that Jacket feels all the time.

It comes.
It has a goal.
It has an outcome.

It is put to some purpose. And then, in that moment when the adrenaline fades, when there’s nothing left to do with it… it oozes out the fingertips and the ear. You close your eyes for a moment and feel the tears that feel hot as blood, or maybe it is blood, someone else’s running down your face – or maybe your own. That hit to the forehead was pretty rough. Close to the splash, who can tell.

And then you stand up,
scrape yourself clean,
and head out.

Someone wanted this done.
That was enough.

That, I think is the fantasy that lies at the heart of Hotline Miami to me. The implication that somehow, in a world that doesn’t exist, that’s cartoonish and ridiculous, that someone misshapen by experience, someone who likes violence, someone who feels inside themselves that rageful cry out to the sky, can have a place. And not because of a lost daughter or a Single Bad Day as we’re so-often taught. Because those ideas, those fantasies, are flawed expressions of the world. The notion that everything would be fine if not for.

Toxic masculinity fucked me up pretty bad. Wed it to sanctimonious Christianity and you have a really rough landscape. No tool but anger, no voice but the rage, and don’t you dare speak. To come out of that space and find myself anew where don’t you dare speak was repeated, and then again, don’t you dare speak, until I slowly but surely found that part of myself a sick, twisted thorn, looking upon myself and knowing that I was a monster to the misshapen world into which I’d grown but somehow, if I stayed very still, an acceptable monster.

Be nice.
No, be nice in the way I want you to be nice.
Don’t react.
Sit still.
Be someone else.
It’s so important that you never be affected by the terribleness we talk about.

The quiet hope was always that I could be put to some use.