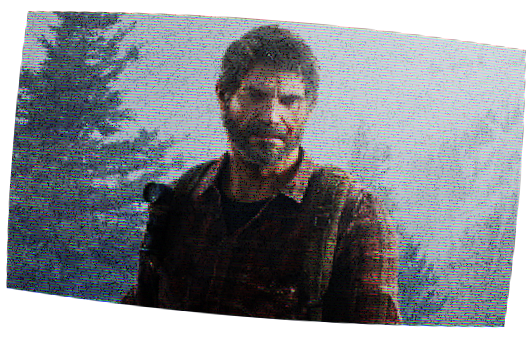 Let’s talk for a minute about Joel from The Last Of Us. I’m going to talk about themes and structure, but not about specific events. You may consider that spoilery.

One of the reasons I favour this form of Cold Take games journalism is that I don’t have to try and divine ahead of time what people think when I refer to things. Right now, The Last Of Us is a game of the year for 2014, a game that was most scathingly called ‘the gaming equivalent of oscar-bait.’ It was a action adventure in a post-apocalyptic landscape with zombies, survival elements, stealth sections, a companion character and fixated on the relationship between a dad figure to whom all other characters were basic props so he could work out his issues as the story’s focus. It was, without a doubt, one of the most 2014 games ever made, and that it was Game Of The Year 2014 seems to follow pretty naturally.

And don’t get me wrong; the game’s entire narrative arc is meant to leave you with this outcome of not liking Joel. Sympathising with him, but ultimately disagreeing with him. Seeing him as a bad person who did an understandable thing, a damaged and broken man whose suffering and pathos leave him limited to the actions of violence. That’s not actually why I dislike him. I dislike him as an emblem for the way this kind of story seeks to contextualise violence, and forgive itself for what it likes.

Joel is an easy way to represent violence. He gets to represent a sort of Acceptable Violence we are already socially positioned to accept. Not only is it playing to a familiar trope of the Fascist Dad Power Fantasy, he sort of relies on that to work. That the story at the last minute is meant to say well look at this bad man, being bad doesn’t undo the fact that the game has spent hours upon hours telling you that Joel may be bad but he’s cool. Oh he was on the wrong side of the tracks. Oh he’s traumatised. Oh he does violent things but he does it for the right reasons. A bad man bound up by etc

Everything we do in games is about putting some distance between ourselves and what we want to be close to. We wrap violence in sounds and visuals so we can get close to it. Joel is a character in a videogame whose trauma flows from someone removed from him dying. Another step, another link. An understandable proxy. We, the audience, stand back and think Yes, I have watched a little girl be killed for no good reason but Joel’s pathos. I understand him a little.

The game then lets you sink into the fun of the violence. It gives you a character who can only look at the world in the light of violent interaction – it suggests – and then lets you do what you want to do. It lets you kill people. Except well it also lets you sneak and avoid people and stockpile rations and save beans and talk with Ellie… sorta.

It’s a game that tries to tell you Joel only knows violence then spends a huge amount of time showing you that he actually knows a ton of other stuff. Just nothing that the game trusts you with.

And then when you’re done, when the game is finished letting you play this Dad Fantasy, it sets you apart and wags its finger. What a bad man Joel is, it says. Sympathise with him, enjoy being him, but let’s all take this thirty seconds to reflect on what a bad, bad man he is.

In Hotline Miami, Jacket’s violence is never explained. There’s hints at things – he owns a videogame console you can’t play, he scrapbooks, he knows how to handle guns. There’s a sequel – I’m told – where you learn more about Jacket, but that is unimportant. What’s important is that in Hotline Miami, there never is that moment.

The game does not tell you Jacket’s violence is justified because of X, but terrible because of Y. The game does tell you that asking such questions is strange, if not outright weird, because that’s not what you’re here for. By not explaining Jacket’s damage, the game lets us see Jacket as damaged by what he does. The game never steps apart from Jacket to admonish him. The game is instead about being Jacket, and it reinforces that with the gameplay. The way that caution melts away as you sink into the meditation of violence. The way that the masks become part of who you are. The way that trying to explain things jerks the world into being suddenly helpless and struggling and painful and that buzzing oh god the buzzing my head.

Jacket is in a pure sense what the story of Joel wishes Joel could be, and then, it is kind enough to not judge Jacket. The game acknowledges that you have the ability to judge Jacket, but then it does not stand alongside you condemning him. It does not act as if violence is a suit that the player can put on and take off as it is convenient. The game’s deliberately incoherent mess of narrative positions creates a more sincere feeling, to me, of someone struggling with violence inside himself than any maudlin Joel flashback cutscenes possibly can.

One of the details to this effect that sticks in my head as I play this game again, though, is that Jacket can show mercy to people only in an expression of violence. Jacket can offer someone who is in great pain a quiet, simple end, a stop to the pain. The game even calls it a mercy kill, and rewards you.

Even Jacket’s mercy is violent.

When you get down to it, Joel feels like the kind of Violent Man written by someone who wants to justify liking being a Violent Man. He’s Jack Bauer. He’s the prepper. He’s a survivalist who’s just Doing What He Had To Do. He’s got Shadows In His Past That Make What He’s Doing Okay. And then, in the last minute, the story chides him for being. We’re done, now, audience, the game says. Look at Joel and judge him and move on.

Jacket just is and we’re left to imagine why he is what he is. We’re left to wonder if he killed Richter so wholly and utterly as a story of maudlin, bloody revenge for his lover’s loss, or if Richter was just next.

And when the story is over, our moment of standing apart from Jacket is not when we look down and judge him – it’s when Jacket does something, on his own, that we don’t understand. He looks at a photo – and he throws it away.

No explanation. No rules. Whatever that means, it’s inside him.