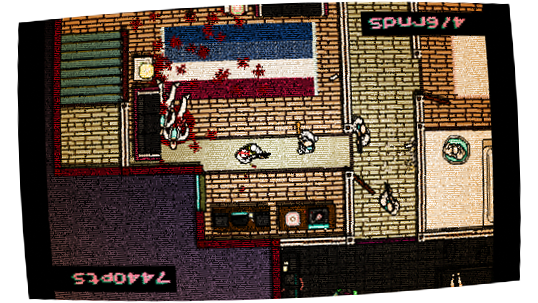 We love masks. The mask is powerful, the mask, the face you present. We talk about them all the time. Our heroes use them, our villains cower behind them. Hotline Miami is full of masks, and they divide Jacket as a character between being an agent and being an observer.

In all sequences where Jacket has a mask, Jacket is acting upon things; in any situation lacking a mask, he is either dead, an object, or he is an observer, being told to move and act. There is almost nothing that he can do beyond choose what to observe. The game implicitly then makes the masks into symbols of agency.

Which, really, they already are.

I first played through Hotline Miami with Don Juan, once I unlocked it. Other masks were dangerous, they got you killed. Brandon? Move faster in to what? I don’t see how you can beat this game without using its bad AI against it. They start you without weapons and you need to usually bust open a door to get in clean. It’s dangerous as hell in this place.

But I can hide behind a door. Maybe shoot a gun into a corner and wait until the bad guys come at me. Boom. The time a door killed me. The doors I couldn’t duck into, the places I couldn’t hide. Walking past doors and knowing there was nothing behind them. Waiting in the hallway for the guy with the gun to get near the door, so I could – whumph through and then his friend was down. The adrenaline. The tiny burst of feeling.

I shouldn’t have been there.

I will get us through this

You push it hard enough and the rage just happens. Frustration isn’t anger. Not really. It’s different, the texture flows from a different space. Frustration has impotence to it. Frustration knows that no matter what you do you can never really address it. Anger’s deeper. Darker. Anger knows that when you get angry, you can make a change, but you’ll break things doing it.

When I put Tony on, I knew the game had to change. I knew there had to be a way through that wasn’t about cowering. I wasn’t just going to finish this game I was going to be good at it. And that meant, knuckles braced, deep breath… in we go. And what Tony put in my hands was power. To knock someone down and execute them felt… helpless. It felt struggling, flailing, if you didn’t have a weapon.

But Tony was well oiled. Tony was dangerous. Tony wouldn’t do well, by the game’s rules, but he would do it fast. Tony never had a lack of options, he never needed to feel afraid. People with guns weren’t scary any more. Doors were still powerful choke-points, but it was force and violence under my fingertips.

I felt confident. Levels weren’t mazes of surprises. I knew where I was. I knew what to look out for. I knew who to dive on. Cycling backwards as two guys with bats came at me, it was crack down goes one and then whumph went the other, jousting forwards.

I knew I was lucky, but I wasn’t afraid of being dead.

At some point it stopped being about understanding this experience. I had passed through some point and I didn’t really know why. I told myself I didn’t ever finish games like this. I just played to goals, and when I met my goals I was done. I didn’t need to finish Hotline Miami a second time. Why would I? The achievements? Why would I bother? There were even hidden achievements, that seemed foolish to try for. No, no, no. Just play the game to the end, and be done.

And then come back for that achievement, because I was close.

Then realise that… really… some of these achievements weren’t hard to get.

I realised that to get an A+ rank on the game’s every level I wouldn’t have to do too much more. I’d just have to get a bit better. A bit better. Tony wasn’t working. I wasn’t scared of things any more, wasn’t scared of dying. Now it was a puzzle again, but a puzzle of executions, not a puzzle of survival. I didn’t know what I was doing wrong, but I knew I could do it right. I knew I could make it work.

That one. Then that one. Just a few seconds more. Widen the combo window. Treat them not like people, turn the violence into a mechanical practice. Die seven times trying for the eighth. Reset the level for better weapon drops. That wasn’t good enough. Go stand in the gunfire. No, try again. Again. Be better. Better than that.

And at some point, the mask told me, you’ll be told you’re good enough. It was a strange feeling. I did like it, when the game told me. I just didn’t know what to do once I’d done that.

So I put Zack back on and tried for bigger numbers.

There is an idea that we just need to take off our masks, and then show people who we truly are. That a mask, being chosen, and created, is somehow a lesser thing than whatever result of traumas and individual experience lays beneath.

I’m not sure I agree.

Sometimes, a mask is a person you can try to be.