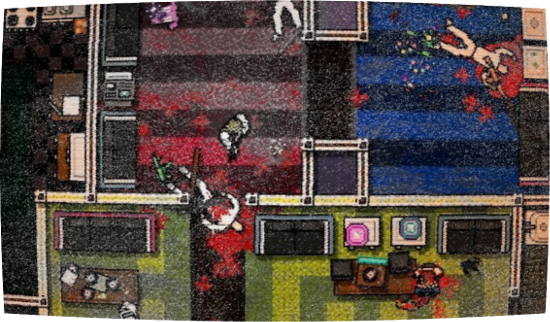 You might have heard about the tension-release cycle in games. Usually horror, but it comes up in other discussions, sometimes simplified as pacing. Very simply, this is a cycle that, in order to maximise emotional payout, involves making the player tense for a moment, then giving them relief. The difficulty curve, a term we’ve become very accustomed to, where a game’s challenge increases over time, is also tied in here, and also to reward. When you start a game, rewards often come in small amounts, and you’re left staring at high costing items you know you won’t be able to afford until you can bring in much larger amounts of reward.

Hotline Miami has a very weird tension-release cycle. Particularly as it relates to the walk back.

Hotline Miami has 20 chapters, which each total around 60 seconds. The largest levels hover around 90 seconds when you actually finish them, though you’ll take often twenty minutes of trying to get it done. Speed-runners bust the whole game in about half an hour, though it’s very hard to get an actual hard, low value on the game because so much of the game’s systems are actually random. Its randomness is amazing too – sometimes you’ll see chain reactions in combat because guards came up to the right location, sometimes the bad AI will just completely crap out on you, and sometimes you’ll throw a brick so it bounces off three people at once. It is an unfair, dreadfully balanced, ramshackle mess of a game where a number of configurations of some levels will just be flat-out impossible and you have to die to them a few times before they’ll reconfigure. And the game’s difficulty ‘curve’ is laughable too – numerous mechanics are introduced with no telegraphing, meaning you just flat out get killed by them. Don’t know what the masks do? Well, suck it, you don’t get to know. Don’t know how weapons behave? Keep up, we’re not slowing down.

It is an amazing frustration engine. It is a game which uses its own glitchy wreckage as an advantage. You will lose and you will die and around a hundred deaths you settle into a zenlike acceptance of the failures and start mashing the R key so quickly you can dive back into the mess, again, again, again. Again. AGAIN. The frustration part of the tension cycle is ridiculously tense. It drives you up the wall and then unfeelingly, unforgivingly, just sits there waiting for you to either fluke your way through or quit the game. It even quits fast, for good, snappy rage-quits.

In a lot of games, the release part of the tension-release cycle is filled with reward. With opportunity to decompress. Sometimes the release is part of the game’s mechanics, where you’re expected to take the time to go find a trainer, upgrade or chat to NPCs and uncompress the plot a bit. The tension-release cycle is a deeply ludic structure – very rarely does narrative invoke tension as well as increases in gameplay tension. You find the cache, you get some health, you’re suddenly less scared, more willing to press on.

Hotline Miami‘s release, however, is a dull buzz and the exact same level you were just in, except now it’s almost entirely non-interactive.

Once I beat the game down into the ground I went back on a little tour and looked around the levels. I looked at the things that pretended to be guns at the wrong angle. At the fish-tank you can shoot open. At the two windows facing one another so you can shoot from one to the other. At the story in abstraction on the floor of Carl on a dance floor, at the deliberately impossible conversation with Jones, professing that it’s a dream, it’s a dream, it has to be a dream.

It’s an efficiency most games can’t manage. Hotline Miami makes safety into its reward in a way that feels eerie. Talk has been made – by Daniel Olson, for example – about the walk back, how you survey the violence around you when you’ve finished a level, and by forcing you to make your way back through it, the game tries to induce you to look at it anew in terms of violence and its consequence. That’s a possible reason. I know that Chris Franklin has argued that the game’s snap from action to peace is more about a sort of ludic meditation than a comprehensive point of videogame violence in itself. I don’t think either point is wrong – in that annoying media-studies way, I believe both interpretations are coherent.

I’m more interested, in this moment how Hotline Miami breaks from videogame convention. The reward, the release in Hotline Miami comes in that instant where it tells you I’m going to stop trying to kill you.

Note that there’s two different levels where the game tells you that and it’s lying. And boy howdy do you fucking jump when that happens. The tension persists and builds through your deaths. The game builds engagement through failure.

It’s a very pure game, in that regard. Almost no reward, but no reward is reward enough.