In a year that’s been full of not a lot happening, I have been spending time making sure I contact people, share my time with them, and just generally reassure them that they’re doing okay, even if they’re not doing a lot. This means a lot more small conversations. 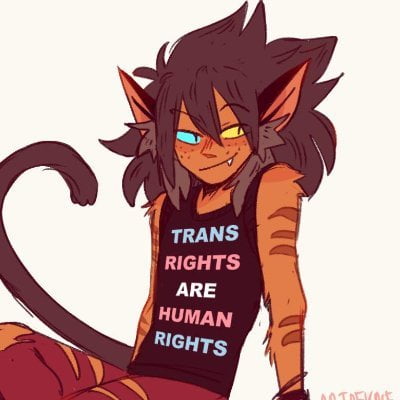 Freyja did help inspire one of my shirts this year, but a lot of this year has mostly been small conversations before I go to bed and just before she does, two people effectively on opposite sides of the world sharing a few minutes of a shift. Freyja’s working on her projects, I on mine, and we both do a lot of our work in public. That can be interesting and sometimes it means we both look at the other’s work, shrug, and go ‘eh, not for me, but whatever.’ Freyja’s always just been good to talk to all year.

Also, her audience are really engaged? If she shares a link, it gets clicked.

I don’t have any grand project of hers to promote here, and her reach is much larger than mine, so check her out, she’s neat, if you didn’t know her already, how, but anyway. I don’t have some particular project to share here, so instead, let me tell you instead, an embarrassing anecdote.

This year, I made a protracted attempt to spend some of the money I was afraid of touching on gifts. I planned originally to budget that money for purchasing things at conventions, but uh, all of those got canned. This meant I had some spending money, which I have largely, this year tried to use in ways that will promote things I like. I spent some of it on kickstarters for games I’m so-so on because I like the philosophy or work of the creators, for example. I try to do a Buy A Queer Person A Pizza Day once a month. I also bought some people some random, not-time specific, not-event specific gifts, just random acts of kindness.

So one day I went to Freyja’s wishlist and tried to buy her just like, a modest amount of stuff. I put all the stuff I thought I could afford from her wishlist in a shopping cart, so everything under like $15 or so, without looking at it, and went to check out, figuring I’d whittle it down.

Then, because Amazon are weird, they told me, okay, we can’t send these headphones or this blanket or these paints because you’re in Australia and she’s in Iceland and the fulfillment centre is in, what, I dunno, Dubuque.So the list got whittled down and wound up being really cheap, like, ‘home pizza delivery’ reasonable. So I just paid for it and went to bed.

I spent four days agonising about whether or not to tell her about this for fear of it being misconstrued.

And then one of the items didn’t get properly delivered.

And I had to contact customer service about it.

As of my writing it, it should have arrived? I don’t know. I’m embarrassed to go check.

Try to do nice things for people! And hey, sometimes you get a funny story about it!