If people keep reading these I guess I’m gunna keep posting them.

Okay, so one night we sat down to play D&D and I had to admit that I was kinda tapped out and didn’t have a campaign to start up straight after one I finished. That’s how it went, I think – this detail isn’t super important because I’m not trying to gladhand myself over how much I run, I’m just wanting to make it clear that this was not a big planning moment.

A friend said he had an idea for a campaign, gave us a level, and asked us to make characters. This being 4ed, we had characters made within a few minutes, and we started out. That character creation being so swift though meant that we didn’t come at this with a lot of definition. One player stated boldly that he was playing a Dragonborn, named Maldracus, which,

and no the player didn’t know.

That set the tone, though – quickly, the idea of a party of monstrous people came up. I wasn’t playing tank or leader this time, which I tended to do – instead, I was given free reign to play one of my long-time wants in the game.

I got to play a druid. 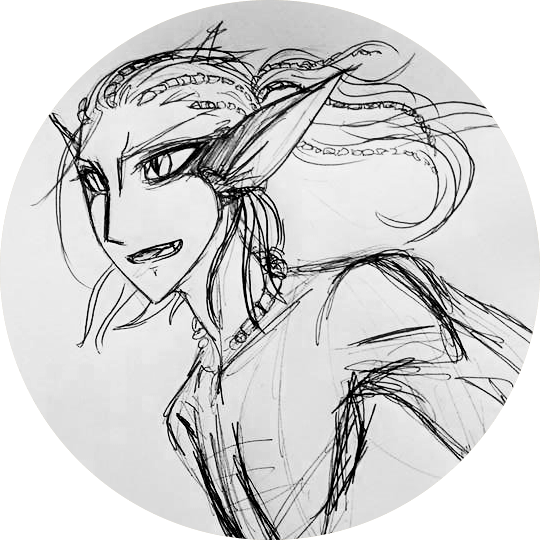 The 4ed druid is one of my favourite things. It has shapeshifting, melee damage, ranged control, a smattering of healing, and a lot of different ways you can focus your build just based on which of these things most excites you. You can even be a quitter and take a build that is a leader, giving up on sweet, sweet beast form, if you want. The book doesn’t specify what ‘beast form’ is, by the way, and you can choose what it looks like whenever you shapeshift, just that it is a natural beast (an animal) or a fey beast (an animal, but funky).

When I was asked to describe my beast form the first time, in an attempt to be impressive and thinking on the fly, I described a black jaguar, but made of vines. It’s 4ed, that sounds fey beasty, that’s great, we went with it. And what ensued then, as I fell into this character, was discovering my wonderful tentacle catboy.

See, once I had this idea of a kind of horrifying feyness to him, the character quickly took shape as clearly not actually an elf. Oh he looked like an elf and he had stats like an elf, but there was all this stuff that was wrong. His hair had tendrils in amongst it, that could move and shift about. He had prominent catlike ears, when administering medical aid he asked where another player character had their hearts, he acted surprised when he took out something’s blood, he just was off. And powers like Firehawk were reflavoured to be strange, bitingly cold holes in the world to another realm.

Basically, I played this druid as if the natural world he was connected to was a bit more Arthur Machen than Beatrix Potter.

Eventually, though we were asked to introduce ourselves by name to an NPC, and this tentacle catboy had to introduce himself. With no name springing to mind, I leapt for the name of the Nameless One’s fake (?) identity from Planescape: Torment: I called him Adon.

Adon got played for about half a year, I think. During that time we learned that druids can go where they want, that you can get a lot done with tentacles, we saw several opportunities to unload the toad and the character got steadily weirder and weirder, in ways I can only describe as chaste-horny. That is, Adon didn’t really have any horniness to him, but everyone could tell how upsettingly sexual things like ‘tentacle catboy’ was, even while Adon was mostly using his shapeshifting and nature powers to turn into a tangle of thorns and kick the crud out of people.

I really properly loved this character, partly as a sort of random grab-bag of parts all happening at once, but also because I’m a sucker for things that transform, and the nobility of his monstrousness all came together in a perfect way.

So hey, invite me to play your 4ed D&D game sometime, I might play an upsettingly sexy tentacle catboy.