Dot is a bright, funloving, extremely geeky young lady, who’s prone to odd stutters and occasional lapses in conversation. This is because while she is a geeky young lady with a bright personality, she’s also a superpowered Clockwork drone from Praetoria that was handled through a variety of somewhat dubious projects on her arrival.

And she’s a robot.

And Dot has decided the kind of cute girl she wants to be is also a crime-fighting superhero robot.

Heartbeep, Beep to her friends, Dot on paperwork when she has to use an official document is a cute robot girl. Based on a Praetorian Clockwork, she’s basically a medical robot that was seized upon by a supervillain, and upgraded into being a perfect assistant and enforcer. That supervillain, unwilling to train or ‘raise’ her new AI assistant, sent her to a hospital to learn everything she needed to know, which then backfired on her as Beep became interested in things like the Hippocratic Oath and taking care of people.

As far as ‘what can Beep do,’ it’s handy that she’s based on a thing that exists in the game – she’s a medical robot. She can heal people, and has access to stunning blasters that knock people over and around. Because of that, it’s not like I need to explain how the existing healing mechanisms in the game work, I dunno, it’s centaur magic. Ask the game how a Clockwork healing works.

Heartbeep is definitely a team supporter, of course. Without support, she’s markedly less powerful, because several of her powers require an organic target to improve. That’s my excuse for how she can’t Fortitude herself, after all.

Socially, though, Beep is sunshine, rainbows, and extreme awkwardness. There’s the occasional glitch, but she’s largely a positive, friendly person who wants to hang around and make friends. Even though she is technically a computer, and has access to internet-level resources, she isn’t a research superbrain kind of character. Looking things up on the internet actively slows her down, and she has to process it to explain it. If Beep’s on the team, she’s helping people, knocking baddies over and around, knocking people out with carefully chosen concussive bursts, she’s not being a Super Genius coming up with great plans. 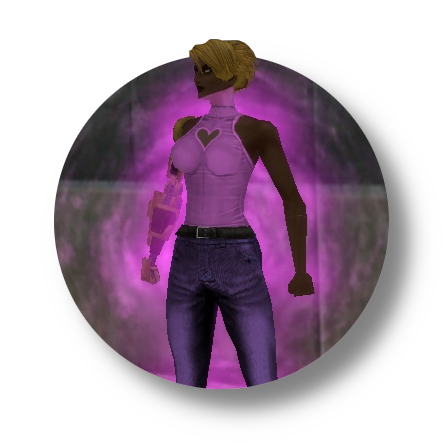 I made Heartbeep to play with the new ‘knockback-to-knockdown’ inventions on Homecoming, which opened up powersets I normally never played. They’re powerful, but I found the knockback very frustrating to deal with. Instead, Heartbeep’s versions are set to fall over and flop about. She’s a Empathy/Energy Blast/Scorpion Mastery defender.

What she’s got going on is:

What she doesn’t have a lot of is ways to boost the damage of a group. She’s not someone you bring along to take down Giant Monsters in a small team, just someone who makes people have an easier time as they play, in larger groups with people of mixed ability.

If you want to look at her build, here, you can download it at this link.

There’s a chance if you watch a bunch of Youtube videos about ‘bad movies,’ you heard the word ‘Heartbeep’ before. It’s from an Andy Kaufman movie, and by all accounts it’s apparently really bad. I haven’t seen it, but I have heard about it, and the word is really cute, in my opinion. Then, in the credits of Dark Void Zero, I saw a friend who had a coworker whose name was given, in quotes, as “Beep.” And Beep is just a super cute name.

That’s kind of where Heartbeep came from. When I was making a bunch of defenders because I wanted to have access to all the primaries I like, I had no idea what to do with this combination, and my experiments with the Clockwork base set from the character builder. I also saw that there are tricks you can do with brown skin and brown patches on clothes – like that cutout you can see in our second picture of Beep.

And that’s where Beep came from. Then when I had a cool robot girl from Praetoria, I had a friend who wanted an assistant for her supervillain and that’s how we got here.