I know! I was shocked to discover this too!

Let’s break that down real quick: Comics, in this context, refers to the large, multi-person efforts of comic book production and distribution in the superhero genres as defined by Marvel and DC Publishing. Those companies have, more or less, the branding down on Superheroes (and I think, the actual copyright on the word?). There are other, lesser publishing houses, but those two houses own most of the gravity that deforms the industry. Image and Dark Horse sort of just gravitate close to those houses and try to work with their same visual styles, so they can count, more or less. And whoever the hell made Tarot, those guys too. Oh yes, and I say guys because I’m assuming but come on, it’s not an unreasonable assumption.

Have Issues, in this context refers to the very vague, non-specific ways in which cultural sexism, ignorance, patriarchy and just generally embarassing awfulness has coagulated into this torrential mass of problems over time. This can come out in costume design, the way female characters are put into a limited range of nearly-exclusive story roles, or the way that even amazing authors like Alan Moore and Warren Ellis profess to seeing a problem, but being nervous and cautious about actually writing women differently, because they’re afraid of doing it wrong or badly. Yes, the guy who wrote Jenny Sparks, and the guy who wrote Silk Spectre both are uncomfortable writing women (which is not unreasonable given the cultural context of where and how these people learned to write). This means even the best writers of comic books are contributing, simply through inaction to the problem.

With Women means, all women. Seriously, women in comics from top to bottom are handled awfully in such a huge number of cases that those exceptions of female characters often have to be specified by a period of time measured in months, or in the work of one individual writer, on one character. Sometimes you’ll get a good, well-written, interesting female character handled only for a few months – and sometimes it’ll be in amongst a terrible story. Even when attempts are made to address major imbalances by putting women at the centerpoint of major, big-name writers’ work, it’s handled badly. If you want an example using the biggest of current big-name superheroes, I can think of two major attempts to bring women forwards in the Batman universe, either by making one the direct focus – Batman and Robin All-Stars, by (sigh) Frank Miller, and Catwoman: Guardian of Gotham.

This is not, however, a post about how much comics suck at handling women at the moment. This is just to show off something I really like. See, recently – and by recently, I mean, like 2008, but give me a break, I’m poor and don’t buy these things very often – an effort was made to change things, starting with one particularly strange distaff counterpart character, Ms Marvel. I like Ms Marvel. When you’re talking about superhero characters in these multicompositional pieces, you usually can’t talk about the actual character as much as you can talk about the handful of related entities and events that make up the character you’re thinking of, and in my case, the Ms Marvel I like is the Ms Marvel who returned from a horrible mind control plot, only to chew out the Avengers en masse for being shitty friends who didn’t understand women, then went off to solo fight crime as an angry embittered drunk, before finding that her greatest fantasy, her one wildest dream, was to be a hero for the sake of being a hero. I really like that mix of grungy disappointment and metatextual awareness twinned with an actual purity of ideal that is why I like superhero comics in the first place. Therefore, I like… some of Ms Marvel. I also, no lies, kind of really love the idea of Ms Marvel and Moonstone, the woman who stole her identity, in a sort of sparring foe-yay-ish I-will-redeem-you-if-I-have-to kind of lesbian relationship but that’s kind of self-serving and I will try to eschew further talking on the matter. 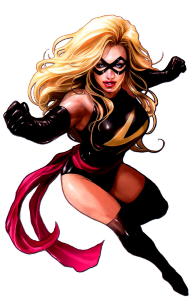 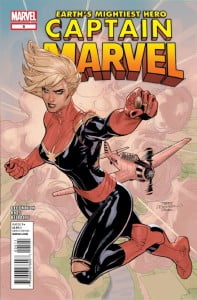