This is a bit of a weird one. Normally I like to save talking about queer content for Pride Month, but I also like using Pride Month to talk about actual queer content, and this is very firmly in the space of ‘fanon.’ On the other hand, there’s a term I want to talk about in Pride Month which is germaine and then you don’t need to know what the Germans have got to do with anything!

And so here, in Smooch Month, a ship. 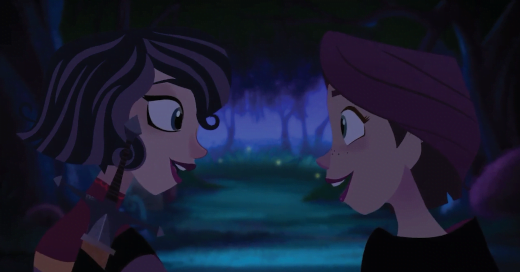 In case you weren’t aware, there’s a TV series of the Disney movie Tangled. The premise of the series is very much one of your Disney spinoffs; if you saw Aladdin or Hercules when you were much younger, or the more recent Big Hero 6 the basic idea is to use the marketable branding of an existing, successful movie, then use the world and setting to durdle around and do stuff that wouldn’t matter for the plot of the movie but still works fine in the genre. Big Hero 6 has a great series, and so, to my surprise, does Tangled.

These series however, often have to run in place with some continuity point, like how Hercules couldn’t exactly have Hercules come into his full power or confront Hades in too ultimate a fashion (given the movie happened after the series), and Aladdin had to keep Aladdin as a street rat rather than focus on the whole ‘prince’ thing, and kept the genie as a bit of a wuss, because otherwise, you know, ridiculous power. Tangled is set right after the movie ended but before the epilogue Eugene describes where eventually, he marries Rapunzel.

Now, it’s best not to think about how the series weaves its way back into the narrative, just accept that this is really well produced fanfiction using the generic adventure world of Tangled, building on the kind of ridiculous side characters we see in the movie. Then, into that mix, you throw Cass, Rapunzel’s handmaiden and daughter of the captain of the guard.

Tangled is a fine movie. I like it a lot. When I first saw it, I remarked that it was ‘the best Disney movie since Hunchback,’ and for me, that’ pretty high praise. I thought Flynn Rider/Eugene was a pretty great character. And that same character, when you have the time to hang around him in a comic TV series, where he’s anchored to Rapunzel’s section of the world and can’t just run from everything, that dashing charm slowly morphs into mawkish dorkitude.

Then, in Tangled, because they couldn’t make Eugene a different person, they throw Cass, who basically gets to be the other half to Raps’ story. They have a fun dynamic, their skills complement each other, and Eugene, being wallpaper for the first two seasons while they develop this friendship, as Rapunzel’s Designated Eventual Romance makes Cass and Raps look really gay for each other.

It’s a fun ship! Tough jock with a sword and her ethereal magic girlfriend? Hardworking defender and actual literal princess? Road trip adventures? Magic mirrors? Trying to sacrifice one another to save the other? Tying one another up sometimes? You get a lot of that stuff here!

Does it work out? Nah, but this series was always going to live in a cul-de-sac and it doesn’t end well. But watch the first two seasons, and the episode where they re-do the movie Tangled with Cass in the place of Eugene, and ask yourself what he’s even doing here.