Nanowrimo is a really interesting idea to me because it looks like something you can do badly or you can do well, and it’s mostly about giving yourself a kick in the ass to get it done. I did it once, and I didi t as a demonstration of what it meant TO do it. But then I sat down and looked at what I’d created and found that it wasn’t, well, it wasn’t BAD, but it could be a lot better. It could afford to be something better and what I’d learned in the doing was that I’d really enjoyed the structure of it.

The core structure of Immortal Engine was that of a fairly basic, fairly unimpressive little hero’s journey style novel. There are definitely some weak spots – bits where I just needed to get from A to B, where there’s connective tissue – and that meant I wanted to work out what I was doing wrong. That led to One Stone, a novel that I personally regard as pretty good, when I can be mustered to have an opinion on it. Still in need of improvement, but definitely ‘pretty good.’

So today I sat down to try and consider if I want to do something for Nanowrimo or not – and what I concocted was the idea of playing with this structure again. Structure helped me a lot with One Stone. Knowing I had three arcs of the narrative, that they fit these events, etc – that all worked out lovely. But in NanoWriMo, you have less space (if you want to hit the goal reasonably cleanly) but you also have more freedom. After all, I had to make One Stone make coherent sense across 52 weeks, each week being someone’s first week.

(By the way, that was a bad and stupid idea. I will try to do something better/smarter for 2016).

Anyway, what I’ve got here is a stakc of business cards, a small handful of 15 of them. I have drawn on each one, a row that indicates them as RED, GREEN or BLUE. Arranged in a grid of 3×5, I can see a line running down one side in red, one in blue, one in green. Then, those five nets are the five ‘throughlines’ of the story – each one showing a scene. 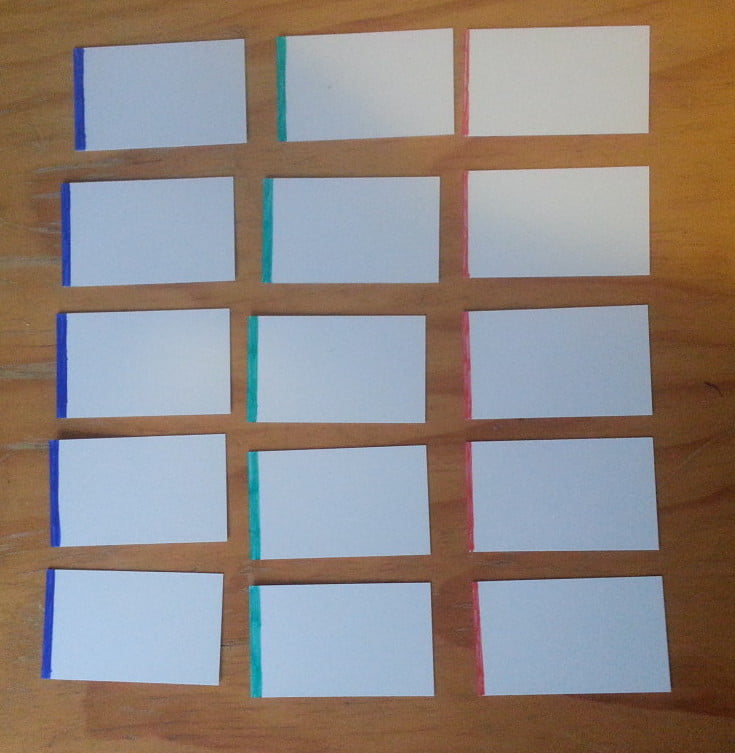 The thought at this point is that red is conclusions, blue is introduction and green is complication. Each card represents a scene in the narrative, and each scene has a connection to the scene that follows it left-to-right – but the scenes are all going to flow slightly differently.

Ideally the scenes will go B-B-B-B-B-G-G-G-G-G-R-R-R-R-R but I kind of like the idea of maybe weaving it a little – B-B-B-B-G-B-G-G-G-R-G-R-R-R-R. The idea however is that this keeps scenes and ideas from butting up against one another. It keeps ideas in somewhat separate spaces.

Now, then, how to make sure these ideas relate to one another?

Each of these is going to be a scene, a scene of some sort, and I’m not sure what order I’m going to do them in. I think for now I’m planning on writing out on each card a scene that needs to happen in the story, then I’m going to shuffle it up and write on each card, one after another, exactly what is in that scene. Then as those scenes fill out, I have to work on what exactly connects them. The idea is meant to make it feel a bit less like a long, slow run down from word 1 to word 50k, a downhill sluice. Also, just having a plan, in general makes things better.

If you do this exercise as a way to structure your novel, bear in mind that this is just a way to do it. It might not work for you. But if you need a way to keep your mind focused on things, if you need to be boxed into strange and twisted scenarios to make sure your work has some sense of cohesion to it, rather than just jumping from thing to thing to thing, then this technique might work out for you.

At fifteen basic scenes you’re looking at each scene representing something about 3,000 words, or, over the course of a 30 day month, about two days a scene. That’s a pace I think you can manage, even if it’s your first time. And it’ll give you something to start with, even if you decide you don’t want to do things this way.

Oh, and I’m not sure if I’m doing this. This is just me talking about how important structure is to getting your story finished.