This is about Magic: The Gathering, but it’s not.

It’s about Academic reading, but it’s not.

In Roger Caillois’ book Man, Play and Games, he describes a bunch of concepts that make a case for how games are important, what they do, what they mean for culture, all that good stuff that we can use in game studies. In this, he laid out his notion of both a sliding scale between two points for the way games work then he describes four types of ways players engage with games.

Mark Rosewater, the head designer for Magic: The Gathering, has talked about types of players and who they design cards for in terms of a sliding scale between two points for the things that appeal to players, and then describes three types of ways players engage with the game.

In Rosewater’s work, he describes the idea of players caring about the feel and lore of the cards they play with (an idea first positioned by Matt Cavotta), and the players who care intensely about the rules of the game state and don’t care about that creative space. These are described as Vorthos and Melvin.

In Caillois’ model, his four types describe games in terms of them having attributes that give people reason to play:

Rosewater’s model describes three types of players, and why they play:

Now, these don’t directly map onto one another; it’s hard to see how ilinx connects to the Tammy/Janey/Spike model. I personally feel that it works well as Janey’s thing, where flipping a card and rolling a dice and seeing what your opponent can do about it is a feeling of being disconnected and helpless that you can enjoy. But that’s fine, it’s a narrow tip to a broader pen.

Also, Janet Murray in Hamlet on the Holodeck points out there’s a fifth type of play that Caillois doesn’t consider – the player who plays to enjoy the idea of the rules interacting. That rules that nest and set against one another in a satisfying way offer enough of a reason to play.

I’ve asked the crew at Wizards if Caillois informed their vision of the psychographics, and as of this writing I haven’t received an answer. Informed by their history, I think they devised their player psychographics independently, and the Rosewater model is missing some basic components.

These are two very good ways to look at game design; they both fundamentally want to focus on why someone plays, with Caillois framing it in terms of big, cultural ideas and Rosewater framing it as the choices of an individual’s feelings. Caillois (and Murray) take into account another two different ways to play, two more ways you can make games and things you can implement in games that people engage with.

One of the reasons we look at Caillois’ model is because, well, he was a French academic, and he wrote about a topic, and other people wrote about it subsequently. At the same time, though, Caillois’ ideas include a lot of super gross colonialism. His whole vision of cultures that aren’t western European talks about them condescendingly, the notion that their destiny was to be conquered or colonised, because of the games they play. The Rosewater model, on the other hand, is a living games text, expressed not in an academic book written by one person, but algorithmically sorted by a game that’s been non-stop produced for twenty-five years.

It’s not that the Rosewater model is better, I just feel it’s a bit easier to share. I don’t need to assign it one or more Yikes.

Is this some bold position, ‘we should use Rosewater instead of Caillois’? Nah. Is it some brilliant academic insight, ‘MTG R&D bites on Caillois’? God no.

It is still interesting. 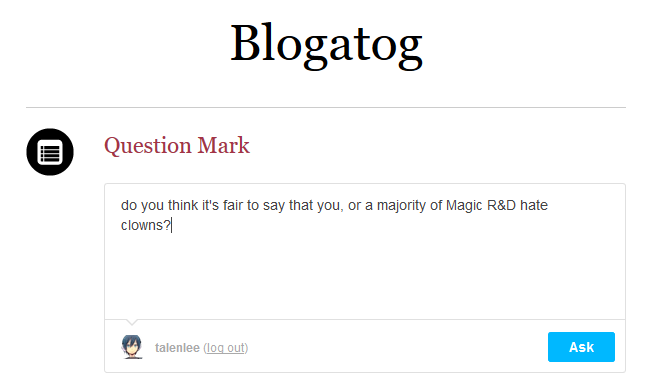 As of this writing, I do not know if Rosewater or Magic R&D hate clowns.